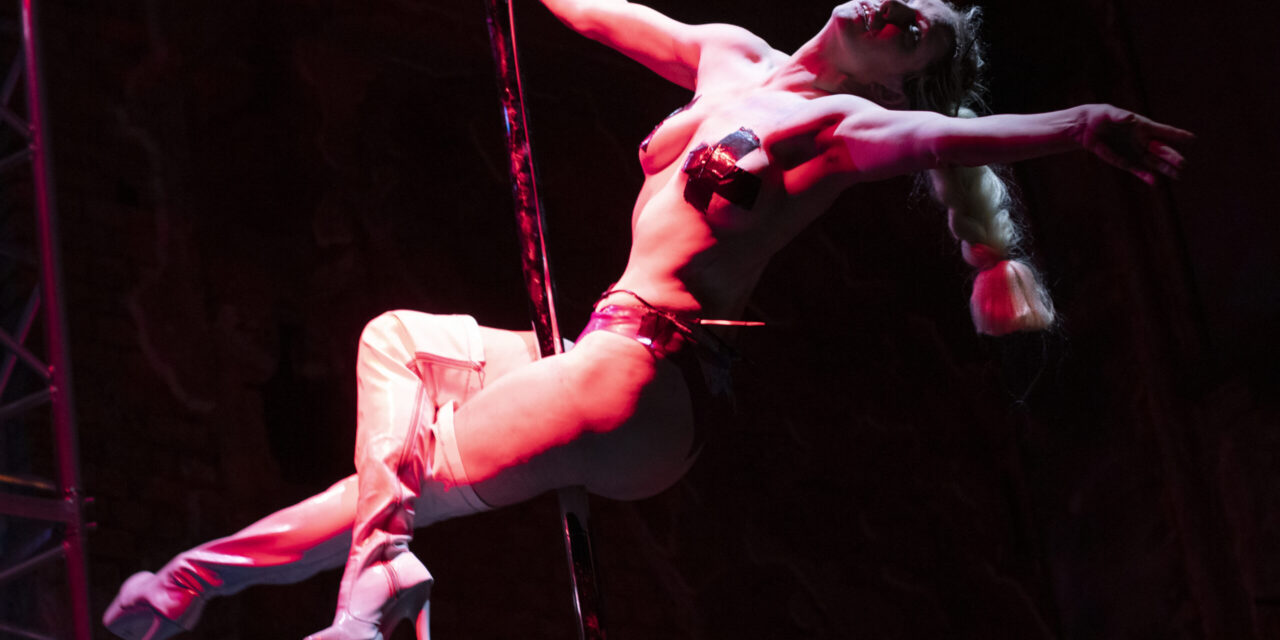 I cannot imagine a better way to end one’s Covid-19 lockdown than to head to a Lucy McCormick show at London’s Battersea Arts Centre. Life: Live, straplined as a debut concert by the nu pop sensation Lucy Muck, was originally premiered in a more embryonic form at the Fierce Festival in Birmingham 2019. Its first London run was due to take place at Battersea Arts Centre in the summer of 2020 – a prospect eventually impeded by the pandemic. Nonetheless, as the opening lines of the show testify – ‘And how was your lockdown?’, delivered with a perfect comic pitch, in the tone of an overambitious and under-resourced wannabe – this impediment might have been a blessing in disguise. Those familiar with McCormick’s earlier works Triple Threat (2017) and Post Popular (2019) will have come to adore McCormick’s trademark mix of comic irreverence and serious talent. While this used to come together in the form of narrative re-enactments of biblical or historical stories using kitchenware and covers of pop hits (thrown in for sincerity’s sake), this time round original pop hits written by McCormick are framed by the narrative re-enactment of a generic pop concert. As is customary in such events, the diva is dressed up, transformed, assisted into contraptions and complex headdresses, rained on, ferried about on dollies, and catapulted through openings in the set before our own eyes, with all the special effects in Lucy Muck’s case conjured up good old DIY-style, of course, with the help of B&Q. This pop star in the making is aided in fact by a delightfully inventive post-punk/ performance art/ clowning set up, created and executed in collaboration with the visual artist and Lecoq-trained performer Morven Mulgrew, and accompanied by memorably versatile live musicians Dave Page on the guitar and Chloe Rianna on the drums and the piano.

Like the concert itself, the eight-song line-up features many tropes of a chart-topping pop album – a few belters, a few ballads, a few sexy, showy, dancy numbers, and quite a few earworms too. I am not a pop music specialist, but I reckon this would sell quite well as an album on its own terms. McCormick’s serious musical prowess as a singer is enough to put many a professional pop star to shame, and the same goes for her dancing skills. I keep trying to remind myself that McCormick is a trained actor, and what a loss it would have been to the rest of the art world had she opted for a more conventional career of an actor! By far the greatest advantage of this run at the Battersea Arts Centre is that it fully engages and deploys every bit of the here and now of live performance: the show spills out into the hidden reaches of the Grand Hall now restored after the fire in 2015, using its built-in organ and spectacular galleries. Depending on when you happen to be watching, you might catch McCormick make jokes about the Euro Cup 2020 too. We sit with our facemasks on, in the deliberately sparsely populated post-pandemic auditorium, at tables arranged cabaret-style, but the space is brimming with a refreshing, nutritious, long-forgotten sense of joy that comes from sharing in a communal experience. Created by Lucy McCormick in collaboration with Morven Mulgrew