The Compañía Nacional de Teatro Clásico (CNTC) in Spain is asking different contemporary playwrights to confront Spanish Golden Age authors, with Sergio Blanco the most recent. He was challenged to write a contemporary play that could illuminate Castelvines y Monteses by Lope de Vega, produced recently at the Teatro de la Comedia, the CNTC headquarters in Madrid. The result is Divina invención (Divine invention).

Castelvines y Monteses is Lope’s version of Romeo and Juliet by Shakespeare. The plot is similar – two teenagers from enemy families fall in love. Nevertheless, de Lope’s play is more a romantic comedy than a tragedy. The show, a musical with Italian standard songs, is directed by Sergio Peris Mencheta. He is well known for his supporting actor roles in American movies and TV series. Lope provides the book and the lyrics, and Italian pop stars provide the songs. It is a cheerful production that would perfectly suit Broadway or Gran Via, the musical theater street in Madrid.

Sergio Blanco has told that he has read all de Lope’s plays, looking for messages and ideas about love. In the press conference, he discussed when he was a teenager, his aunts took him to see La dama boba. He was shocked, he said, and he became a fan of Lope. Blanco considers that Lope has been one of his ‘influencers’ since then along with his idea about love.

This research into de Lope’s plays led to Blanco creating a play that is written as a conference about love. Moreover, it is about how Blanco could understand his love affairs and behaviors after reading de Lope’s plays. However, there is barely any reference to Lope in this conference. There is only one specific reference to the smell of a rose, recalling the famous speech by Juliet with the line, “a rose by any other name would smell as sweet.”

The play is divided into thirty parts, a prologue, and an epilogue. In the short scenes, attendants are informed of the conference’s details, from the objects that are on the table to the pictures that are projected onto the background. There is a lot of meanings that Blanco embeds in this. For example, he has used violent paintings showing plenty of flesh and blood by Francis Bacon to illustrate the spoken text. Many of them are men, including two men looking at each other with an expression of desire. Some of them are crying because love aches.

There is also a boxing glove on the table. The glove reminds him of his adolescence, the gym, and his coach who teaches him about more than just boxing and sex. He teaches him that love takes care of lovers, but this is also a story that lets him know love between adults and teenagers is condemned. Is it possible to forget this lesson? Is this the reason that he is a lonely person who looks for sex around the world?

Blanco unfolds stories, places, relationships, references, and thoughts during the conference. There is no clue as to which of them are true or false. Sometimes everything he said looks obvious. Sometimes, it is stupid, or naïve. Sometimes it is deep. It is a sensitive journey for spectators made of words and poetry. This is conveyed with his calm voice, his Latin American accent and idioms, and his ability for telling stories. It is an ability that he has developed in classrooms, in theater and with his regular hot Argentinian lover-for-hire in Buenos Aires.

This young man that has sex with Blanco every night after they met asks Sergio to tell him a story. He does this like Scheherazade does in Arabian Nights for the man he paid to pleasure him, and for the play’s spectators. The audience listens to Blanco with the same devotion as the hot guy does who he paid for sex. Tickets have sold out for the five days that Sergio Blanco was in Madrid – people are paying for love, and paying to hear about love. 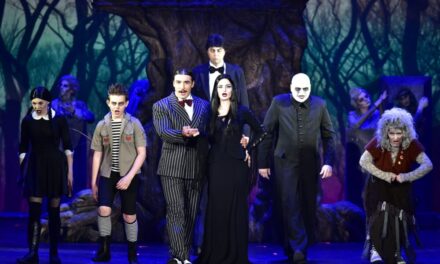