“Hamlet”: A Play That Speaks to Pandemics Past and Present 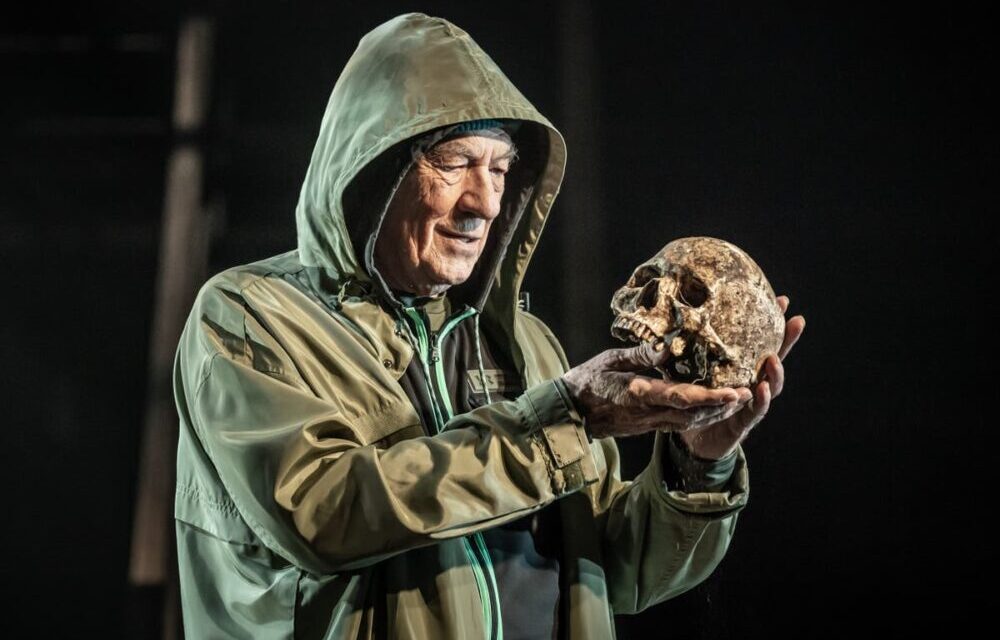 I went to the theatre for the first time in 15 months to see the Theatre Royal Windsor’s new production of Hamlet. Starring Ian McKellen and directed by Sean Mathias, it really resonates in a time of the ongoing pandemic. McKellen’s very contemporary, teenage Hamlet slouches around in a hoodie and trackie bottoms, grieving, isolated, and angry.

The setting, like the original, is the city of Elsinore, Denmark. In this version, COVID funerals are disrupted and truncated. Hamlet, a latter-day prince, is a bisexual university student stuck at home with mum and step-dad when he wants to be back at uni in Wittenberg, hanging out with his friends and lovers.

Mental health issues afflict those in mourning, especially royalty. Hamlet muses “to be or not to be” as his lover, Horatio, gives the prince that most precious of things in lockdown, a haircut. Characters are overwhelmed by feelings of loss. Suicidal thoughts lurk. Denmark feels, and looks, like a prison. The government is morally corrupt.

Much of the play, this modern interpretation and Shakespeare’s original, speak to the circumstances and current climate in which we live. There is much in it to relate to and also learn from as our world widens and we learn to “live with the virus.”

The specter of plague and pandemic hung over much of Shakespeare’s life. He was born in April 1564, a few months before an outbreak of bubonic plague killed a quarter of the people in his hometown, Stratford-upon-Avon. Such pandemics would recur during his time in London in 1592, 1603, 1606, and then 1609.

When Shakespeare wrote Hamlet, usually dated around 1599-1601, feelings of grief, mourning and bereavement were probably at the forefront of his mind. His parents were very elderly by contemporary standards. Shakespeare’s father, John, died in September 1601 around 70 years of age. Five years earlier, in August 1596, Shakespeare’s son, Hamnet, had died aged 11, possibly of the plague.

It is an uncanny coincidence that the name Hamlet is so close in sound to the name of Shakespeare’s son. The play is obsessed with fathers and sons, and how to navigate mourning a father’s death. It is full of speeches about grief and attempts to move on after bereavement. Hamlet is not alone in this as Ophelia and Laertes also suffer from unresolved grief in the play.

What galvanizes Hamlet out of his emotional lockdown is theatre. When he hears traveling players are in town he leaps into action. Like so many in the audience, he has really missed the theatre.

Despite the modern dress, Sean Mathias’ production eclectically evokes the theatre practices of the troupe in Hamlet. Most obviously, casting ignores age, ethnicity, and gender, something which evokes the fact that Shakespeare’s stage had young men playing women. So while Jonathan Hyde is realistically cast as a plausible, efficient Claudius, the teenage Hamlet is played by an 82-year-old, while Francesca Annis plays his elderly ghost.

Lee Newby’s set design also encourages audiences to think of early modern playing conditions, transforming the Theatre Royal stage into a black metal, faux Globe theatre with two banks of seats on either side of the stage and a gallery at the back.

As a result, the onstage audience is clearly on display, sharing light with the performers. The mandatory face masks offer a constant reminder of COVID while blanking out the audience’s reactions, but they also offer a reminder that Shakespeare’s playhouse had to navigate its own pandemic and often had to negotiate sudden lockdowns.

When the weekly plague death count reached 30 in Shakespeare’s time, the playhouses closed. Plague transmission was not properly understood, but it was clear that people congregating created a super-spreader event of sorts.

Shakespeare, a player, playwright, and, most importantly of all, a shareholder in the Globe, seems to have seized the moment and written prolifically during plague lockdowns. In 1592 he was writing narrative poetry- Venus and Adonis, The Rape of Lucrece– as plague raged.

The years 1603 to 1604, 1606, and 1608 to 1609 were also bad for plague, and seem to have given Shakespeare space to write. For example, King Lear was performed at Whitehall Palace on Boxing Day 1606 at the end of the year of the plague. From 1597 on, Shakespeare could also escape to his sprawling Warwickshire country mansion, New Place, one of the largest houses for miles, with at least 20 rooms. By contrast, many players were desperate for any income and facing destitution. So, sometimes playhouses would reopen before the mortality rate fell to the level considered “safe”. The thought of what a “freedom day” was like in the early modern playhouse, with those standing (known as groundlings) pressed closely together in the yard, is perhaps even more daunting than watching people flood back now restrictions are lifted.

Now that so many restrictions have been lifted now in the UK since July 19, I am feeling very ambivalent about the shared experience of live theatre. The Theatre Royal created what feels like a very safe space and, personally, I could get used to having such a generous amount of legroom in front of me. In a COVID-secure theatre, there’s no need to get intimate with complete strangers while trying to squeeze through to your seat.

But after “Freedom Day,” the theatre is only insisting that masks remain mandatory for the audience onstage who are in such close proximity to the actors. The theatre will only “strongly encourage” the rest of the audience to mask up.

During the first decade of the 1600s, pandemics ravaged the country’s population and theatres were closed as often as they were open. This might be the case now too. Already productions have had to close to isolate, including London’s Shakespeare’s Globe, after positive cases among cast and crew. Maybe restrictions indoors could stave off more productions having to close. It took 30 deaths to close the playhouses in the 1600s, but now all it takes to close a theatre is one case of COVID.

This article was originally posted by The Conversation on August 2, 2021, and has been reposted with permission. To read the original article, click here.