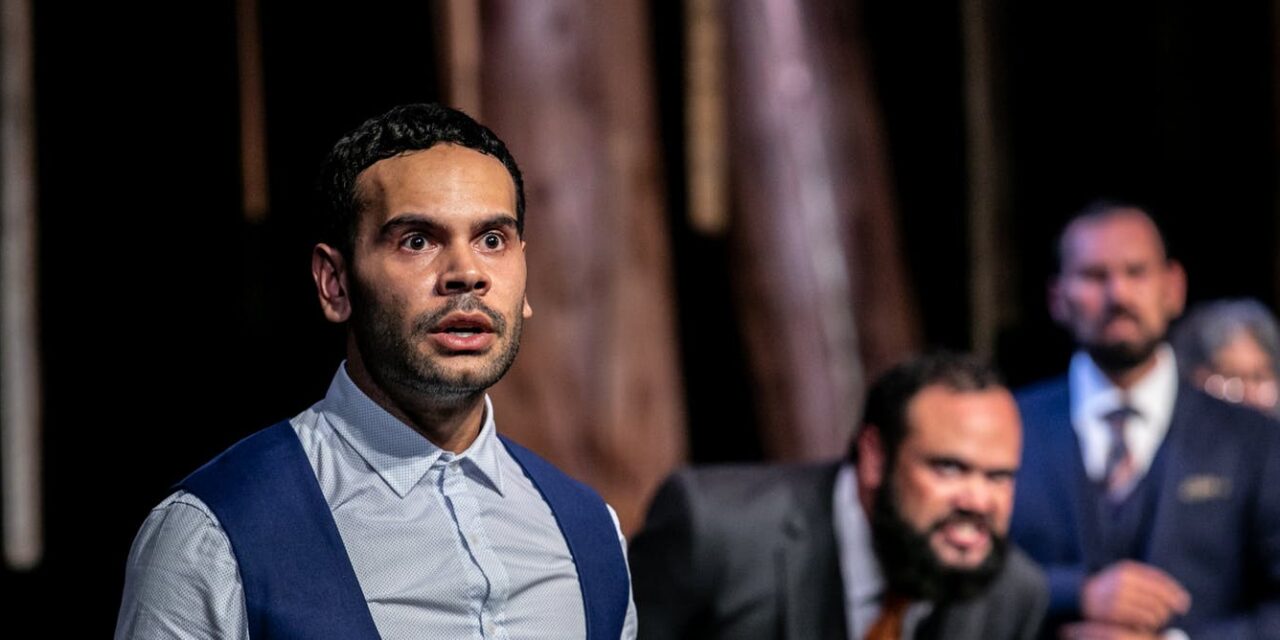 In "The Visitors," seven senior law men discuss what to do about approaching ships, unlike anything they’ve seen before. Photo by Victor Frankowski.

Seven senior lawmen discuss what to do about approaching ships in Frederick Copperwaite’s The Vistors; one of a few indigenous shows in this year’s line-up at the Sydney Festival

Before the show, a warm greeting from Ali Murphy-Oats, the managing director of Moogahlin Performing Arts Company, and a welcome onto Gadigal Country by Uncle Charles (Chicka) Madden set the scene for what can only be described as an outstanding evening.

Written by Muruwari playwright Jane Harrison who also wrote Stolen and Rainbow’s End, The Visitors imagines a group of Indigenous leaders discussing what to do about the strange vessels on the horizon.

It is 1788, and six senior lawmen (with one young man sent as a representative) witness the arrival of the First Fleet. The play features a talented cast: John Blair, Damion Hunter, Colin Kinchela, Nathan Leslie, Leroy Parsons, Glenn Shea, Kerri Simpson. As we approach the 250th anniversary of Cook’s arrival, this play is timely and fresh given the paucity of publicly available sources that document first encounters from an Indigenous perspective. Visitors had come and gone for many years and the play includes reference to Cook’s visit 18 Summers prior. But previous visitors always left. The script involves much discussion about whether to engage in war or allow the visitors to come ashore. After lengthy debates, the men notice that the visitors are landing. They make the fatal decision to welcome them. The Visitors’ dialogue is witty and satirical. The men at its center describe the visitors in derogatory ways that mirror the way colonizers described us – “wretched people” with nothing to offer.

The set is beautifully designed with large trees framing the meeting place. Fog drifts in, allowing the audience to imagine a time long ago by the ocean. The sound of the sea and birds amplifies the experience.

The men are dressed in suits symbolizing their status in contemporary terms. They are given clan names that relate to Countries such as Eel clan or Bay people. This avoids any contest around traditional boundaries and clan names. Personalities, But Where Are The Women?

Aboriginal protocols are clear – the men pay respect to the Country as they each arrive. Formal proceedings begin with being welcomed onto the Country, just like what the audience experienced before the performance.

Formalities aside, there is also a lot of humor in this play. Fun is made of one of the men who has complained he can’t connect with his new wife. Grandfather Elder examines him and concludes that his new wife probably just doesn’t like him. Personalities are clear – something that is often missed in the colonial writing of Indigenous peoples. We are human, we laugh, we disagree and we engage in combat, revenge, grudges, and all manner of human frailty.

The experience could have only been improved by the inclusion of Aboriginal women in the cast. The women, we are told, are away on Women’s Business and although they are often referred to, are missing from the decision making process. In one scene one of the men refers to women as “spoils” of battle and in another, after hearing the younger man simulate the mooing of a cow, a comment is made that it sounds like his wife. Perhaps this is just banter between men, however, historically a range of tropes have been used to typecast Aboriginal women into roles imagined by the colonizers.

The women’s absence suggests there was — or is — a lack of senior Aboriginal women knowledge holders. The truth is far from this assumption. There is ample evidence Aboriginal women were involved in early interactions, amicable and otherwise, with early settlers. For example, it is believed local fisherwoman Barrangaroo — noted for her presence and authority — was present at the first meeting between settlers and her Cammeraygal people at Manly in 1788, and also participated in warfare with settlers at North Harbour in November 1788. She is remembered in early colonial documents as having a commanding presence, inciting respect and fear in those around her. Likewise across the country, there are stories of Aboriginal women emerging including their heroic efforts to defend Country.

This criticism regarding aboriginal women notwithstanding, there is much to highly recommend this play. Funny, informative, somber, real, imagined and very enjoyable, I would encourage everyone to see it.

The Visitors runs at Carriageworks until 26 January.

This article appeared in theconversation.com on January 22nd, 2020 and has been reposted with permission. For the original article click here.