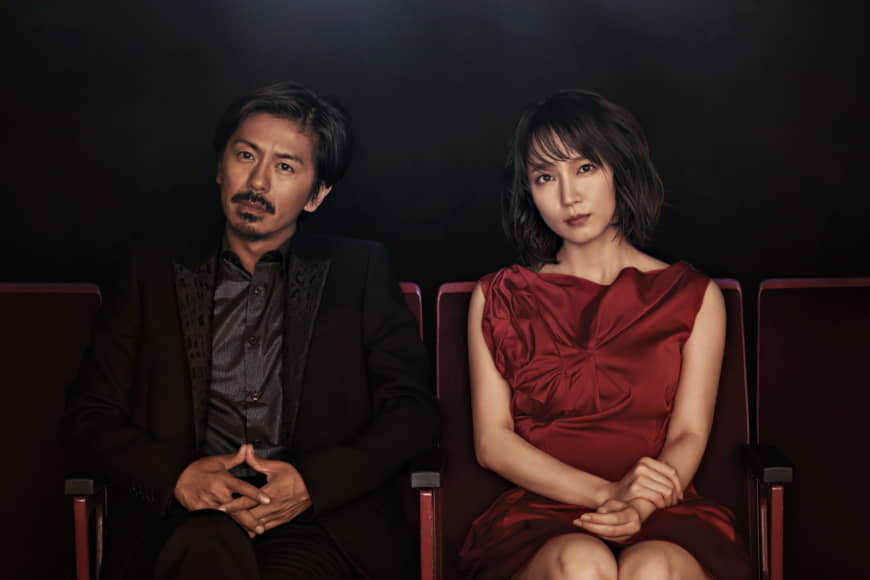 Deal with the devil: In "Fortune," Go Morita (left) plays Fortune George, who sells his soul in exchange for success and the love of Maggie (Riho Yoshioka), in an update to the classic tale of Faust.

Japanese theater gets off to a flying start in 2020 with a collaboration between leading British and Japanese creators on the world premiere of a major new play being staged in Japanese.

Posting this exciting landmark is Fortune, a witty but starkly contemporary take on the legend of Faust by one of this century’s darlings of Western theater, the English playwright Simon Stephens.

Although still only 48, Stephens has long been in high demand in the United Kingdom, the United States and around Europe — indeed, he is one of the most-performed English-language writers in Germany. However, from the time of his earlier works, such as On the Shore of the Wide World, in 2005, Pornography and Harper Regan in 2007, and through to The Curious Incident of the Dog in the Night-Time in 2012, he has also been among the few non-Japanese contemporary playwrights popular in Japan.

Hence it was no surprise that a packed crowd attended a recent press conference held at a Tokyo studio to herald Fortune, which opens Jan. 13 at Tokyo Metropolitan Theater in Nishi-Ikebukuro.

There, Stephens was accompanied by his long-time collaborator and friend Sean Holmes, the play’s director, and Paul Wills, its designer. Beside the Brits sat five of the play’s main actors, who were obviously thrilled to be part of this pioneering production — male lead, Go Morita, also a member of idol-pop group V6, his female counterpart, Riho Yoshioka, and stage veterans Shingo Tsurumi, Toshie Negishi and Tomoko Tabata.

Yet, when Stephens began to speak, he was sombre, saying, “My own country seems to be becoming smaller and smaller and is set to turn its back on the rest of the world,” in clear reference to the U.K.’s upcoming exit from the European Union.

“So I think international collaborations sharing communication across continents have never been more important,” he added, “and, in that sense, this production is the most important thing I’ve made in the whole of my life.”

Then Holmes — the newly appointed associate artistic director of London’s prestigious Shakespeare’s Globe, who, for a decade, headed up the city’s cutting-edge Lyric Theater — explained how the project began.

“A friend introduced me to the producer Tatsuya Ito when he was visiting London. He was looking for a project for Go Morita, and asked if I could recommend a play for a lead actor in his 30s,” Holmes said. “After he left I found that Morita starred in Simon’s ‘Curious Incident’ in Japan. And as Simon had already written Fortune, and I’d been talking to him about doing it somewhere, I said to the Tokyo side: ‘This is probably a bit of a crazy idea, but there’s this new play by Simon Stephens …’ And immediately they said ‘Yes.’

Later, when the three of us are able to chat together, Holmes explains that, though he and Stephens were at the University of York in northern England at the same time, they didn’t meet until they started to work in theater in London.

“That was after I saw his new work, Herons, at the Royal Court Theater in Chelsea in 2001,” Holmes recalls. “It is still among my top 10 favourite plays, because the writing feels very true and, despite its sense of menace, it is unexpectedly funny — but with hope and tenderness in there, too.”

Seven years later at the Edinburgh Festival Fringe, Holmes garnered positive reviews for his staging, with Wills, of Stephens’ play Pornography, about seven people’s lives at the time of the 2005 London bus and Tube bombings — which happened the day before London was awarded the 2012 Olympics.

Since then, Stephens and Holmes have teamed up several times, including on A Thousand Stars Explode in the Sky (2010) and Morning (2012) at the Lyric, where Stephens was an associate artist. Regarding Fortune, the drama broadly follows the classic structure of the story of Faust, which dates back to at least 15th-century Europe. It tells the tale of a man who accepts the devil’s offer of unlimited earthly success — at the price of eternal damnation thereafter.

Fortune, though, plays out in the cut-throat setting of today’s London, where a famous film director named Fortune George (Morita) meets Maggie (Yoshioka), an attractive young producer who is married and loves her husband very much.

Fortune is a workaholic, but he’s just starting to find himself attracted to Maggie when he meets Lucy (Tabata), a mysterious woman who gets him to sign a contract guaranteeing him further artistic and business success — and Maggie’s love — for a limited period of 12 years. It’s a duration he insists on because he wants to live a year longer than his father did.

After that, Fortune’s life becomes a ridiculous and chaotic mess, as he gradually loses his sanity in the dog-eat-dog world he inhabits.

“This play, Fortune, is plundered from many different sources — for sure (Christopher) Marlowe and (Johann) Goethe, but also Wim Wenders’ Wings of Desire; David Lynch’s Lost Highway and Blue Velvet; Alan Parker’s Angel Heart; and also Hamlet’s father talking about the afterlife,” Stephens says, spanning more than 400 years in his references.

“Since childhood, I’ve been terrified by the notion of hell,” he admits, “but Fortune has elements of the romance of Goethe and the horror of Marlowe. And though Fortune George is a fictional person, the play imagines that devils and hell are real — not metaphors.”

Stephens explains that in Fortune he takes a more literal approach to Faust’s deal than in some of his past works.

“When (Fortune) sells his soul, in the world of the play he’s going to hell forever, and he’ll suffer eternal damnation and spend eternity in agony. I’ve written plays before where the so-called Faustian fact was a metaphor, but here it’s real,” he says. “When I think about the vertiginous nature of eternity, and the possibility of eternal damnation, I’m terrified. But terror is a great place for writers to go to.”

At this point, Stephens draws parallels between the story and the real world of today.

“As a culture, as a world, as a species, economically and ecologically and politically, I think we feel ourselves to be looking into an abyss at the moment,” he says. “We don’t know what will happen, but we are staring into eternity and every day we make transactions dealing with that. I think we need stories to help us make sense of those transactions.

“In fact, I even flew to Japan to make the play despite knowing the planet’s ecology has never been more vulnerable. There is a Faustian fact in that, and we face them all the time. So there has never been a more important time for a new Faust story.”

Picking up that theme, Holmes continues, “The play makes that metaphor of evil concrete. There is a woman on stage who is a devil. There is a hell. You can lose your soul. These things in the world of the play are real. They are, obviously as far as we can tell, not real in our world now, but we say — as most plays do — ‘Imagine a world that’s slightly different; one where the devil isn’t inside us, but next to us.’

“This gives us a way to explore that decision about which way do I go to get what I want? What am I prepared to do, and to give up? And that’s something we are all familiar with.”

Holmes goes on to describe Fortune as an exciting story with parts that are “really funny and sexy.”

“Though it talks about dark themes in our world, I really want to say that it’s a love story,” he says. “The first half after he sells his soul is exciting — there is a party, Hollywood and music, and that rush of excitement and possibility is really important. Also, Simon wrote songs into the play, and our composer Shuhei (Kamimura) has done a great job with them. So ‘Fortune’ is littered with song and music and life and big scenes — before it all goes downhill. And there are even some good jokes in there.” Tried and tested: Simon Stephens (left) and Sean Holmes have been collaborating on stage productions for over a decade. | NOBUKO TANAKA

Besides this production’s cast of 13 Japanese actors and Kamimura, its musical director who often worked with the late Yukio Ninagawa, its lineup also includes contemporary theater choreographer and dancer Shuji Onodera overseeing the actors’ movements.

However, despite this being Holmes’ first experience with a mixed-nationality team, he says he is already comfortable working through translators and is enjoying interacting with the “bold and funny and creative” Japanese cast and staff.

“My first responsibility is to deliver Simon’s vision, refracted through my own instincts, tastes and energies, with a group of people, some of whom are Japanese and some of whom are British,” Holmes says. “The aim then is for the audience to experience something that is transformative. Of course, theater’s not very often going to change our lives, but what it can do is just poke us, or slightly turn things into a different perspective.”

Holmes also draws parallels with the modern world, especially with his home nation.

“For a lot of us, we’ve gone in a very short time in Britain from, say, the 2012 Olympics in London — when the U.K. seemed to be one of the most open, welcoming and diverse countries on Earth — to one that is removing itself from the European Union. And that’s very upsetting; it’s horrible,” he says. “So it’s really good to come and work here and meet new people. I know it’s a very simple and sentimental statement, but it’s also very true and we’re better for it.”

Stephens then notes that it would be foolish to generalize about Japanese theater or culture based on his few days in Tokyo, before admitting that working overseas has challenged his ideas.

“I think people don’t travel to learn about where they’re going, but about where they’ve come from. So for me, working here is illuminating assumptions I’ve made about theatre that I realize aren’t necessarily true,” he says. “For instance, there’s a fascination in British theater with exploring psychology as an engine of behavior. But I now realize that’s not because it’s the right way to do it; it’s just the way we do it.”

He sums up by describing it as a case of “different passages to the same waterfall, and that’s wonderful to experience.”

“The joy of theatre, the joy of art, and the joy of our imagination is that we can take ourselves collectively to unthinkable places,” he says. “If we can do that with fearlessness, then I think this great empathy machine of the theater becomes our greatest art form. So as artists we need to ask ourselves how remarkable do we dare to be. And though I don’t know how good ‘Fortune’ is, at least we’re trying to do something. That makes me very happy.”

All that and history in the making, too.

Fortune runs from Jan. 13 to Feb. 2 at Tokyo Metropolitan Theatre. It will then tour to Matsumoto, Nagano Prefecture; Osaka and Kitakyushu until March 1. For more information, visit stage.parco.jp/program/fortune.

This article was originally posted at japantimes.co.jp  on January 3rd, 2020 and has been reposted with permission. To read the original article, click here. 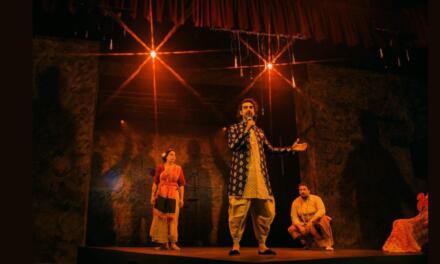