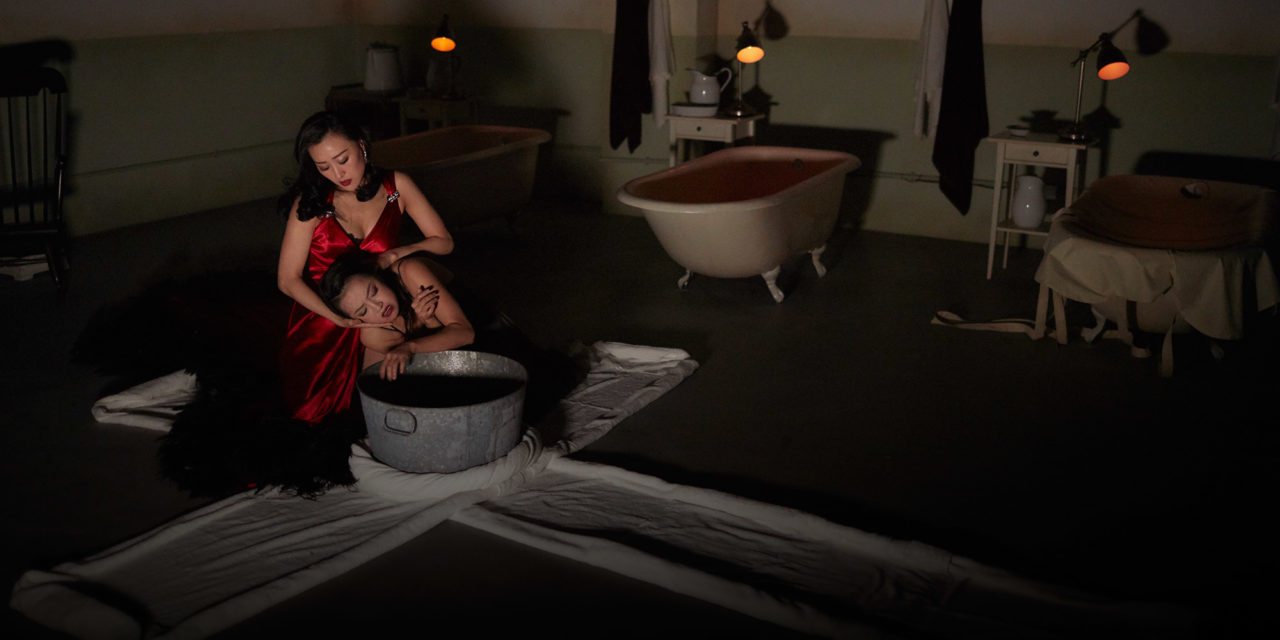 As we neared the elevator doors, a woman dressed in a beautiful 1930s-era gown directed us to keep our white masks on. “This is an individual experience,” she murmured in Chinese. “If you’ve come with a loved one, it’s time to bid them farewell. Fortune favors the bold.” With that, we were ushered into the elevator, our group gradually dispersing as the bellhop let us out into spaces on different floors: a stone graveyard, the hallway of a hotel, an open ballroom with trees scattered around. When it was finally my turn to get off, I could have sworn I heard him say, “Good luck.”

Those who have attended the Shanghai staging of production company Punchdrunk International’s immersive theater piece Sleep No More might recognize this as the opening act of a wild and chaotic journey into the fictitious McKinnon Hotel. For up to three hours, audience members can explore the “hotel”—the multistory building in the city’s Jing’an District that houses the play’s Chinese adaptation. There, they unlock the mysteries of the story, which is set in 1930s Shanghai and draws heavily from Shakespeare’s Macbeth, Alfred Hitchcock’s film Rebecca, and Chinese mythology. It’s proven a popular draw: Sleep No More just celebrated its second birthday this month and is now the city’s second-longest-running show.

It’s not surprising that Sleep No More found a home in China, given its previous runs in London and Boston, its ongoing popularity in New York City, and the near-cult following it’s built online. But there’s more to it than that: Sleep No More is part of a long tradition of Macbeth adaptations, and Bard’s tale of unchecked ambition, conspiracy, and ruin seems to have special resonance here. Whether in the form of the Punchdrunk production’s immersive staging, the syncretism of kunqu opera versions, or more traditional renditions, Macbeth has proven itself no brief candle in China. 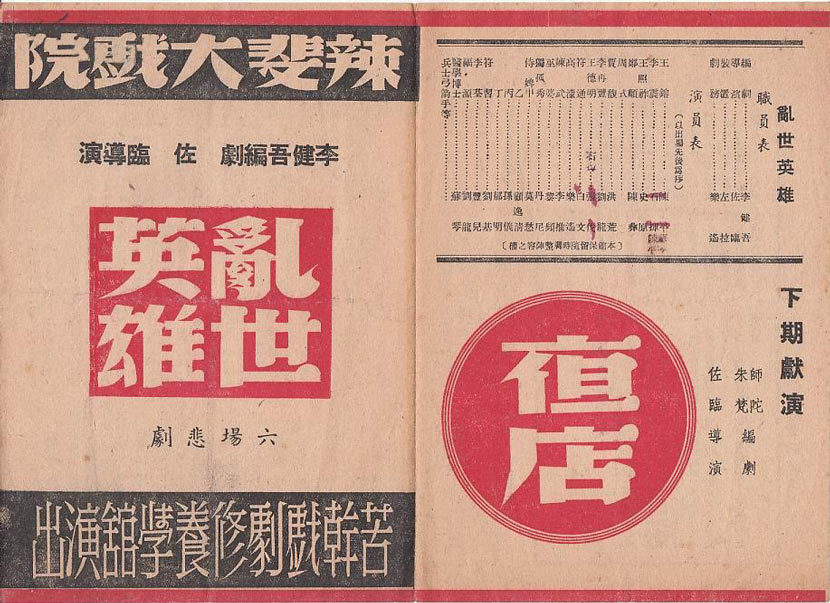 A poster of a theatrical adaptation of Wang Deming from 1945. From Douban

The play’s history in the country is an interesting one. The Usurper, one of its earliest Chinese adaptations, hit the Shanghai stage in 1916 and contained thinly veiled jabs at Yuan Shikai, a warlord who had crowned himself emperor the year before. Decades later, in 1944, the tale reappeared as Wang Deming, which was set amid the ongoing violence of World War II. Adapted into a film in 1945 — just four months before Japan’s ultimate surrender — Wang Deming was both a call to arms and a way of reassuring audiences that no ill deeds go unpunished.

Several decades and a few less-than-peaceful transfers of power later, Macbeth was revived again. In 1980, just four years after Mao’s death and the end of the decade of chaos that was the Cultural Revolution, the Central Academy of Drama decided to stage its own version of Shakespeare’s play.

In her book Occidentalism: A Theory Of Counter–Discourse In Post-Mao China, the scholar Xiaomei Chen argues that this version, like earlier ones, was tailor-made to fit the times. The story’s doomed protagonist—a once-admired war hero toppled by his own ambition—allowed audiences to quietly work through their feelings toward their own fallen leader. To quote the contemporary critic Xu Xiaozhong, Macbeth was a story of “how the greed for power finally ruined a great man.” I can only imagine what audience members, some of whom had perhaps witnessed or even indulged in their own “black and deep desires” over the preceding decade and a half, would have thought as they watched Lady Macbeth struggle with a guilty conscience or her husband descend into paranoia. 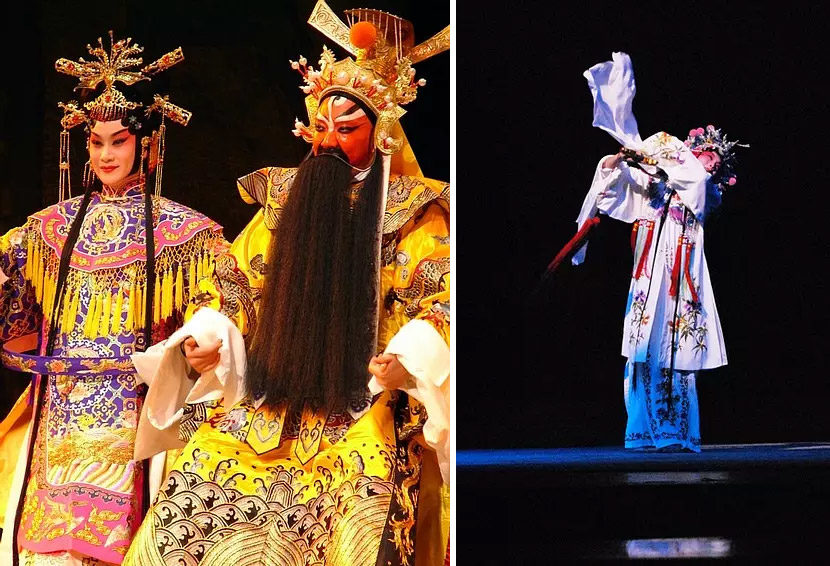 Photos from a 2008 performance of the kunqu opera Bloody Hands. From Douban user “清平调”(left) and “清音”

In the years since Chinese directors and playwrights have continued to adapt Macbeth in unique ways. It’s been turned into both the kunqu opera Bloody Hands and the Peking opera The Kingdom Of Desire. A 2015 Hong Kong rendition even used time travel to get the characters to ancient China.

So, what about Sleep No More? One of the first things that set it apart from a traditional staging of Macbeth is that it is in no way, shape, or form a traditional staging of Macbeth. Whereas most modern interpretations of the story still treat it primarily as a tale of power-hungry rulers and the collateral damage caused by their greed and ambition — hardly irrelevant material in a country with a long history of official corruption and high-stakes struggles among its leaders—Sleep No More shifts its attention to the audience.

Punchdrunk’s staging boils Macbeth down to a visceral set of emotions: ambition, betrayal, and paranoia. Set in a twisted, labyrinthine hotel, it seeks to instill a sense of claustrophobia and anxiety as characters rush along corridors and past white-masked attendees. Audience members are encouraged to root around hotel rooms for clues to the story rather than follow it linearly. I lost track of Macbeth himself in the complex maze of staircases and corridors early on in my visit and ended up spending several minutes reading notes left on an abandoned typewriter. In any other play, this might be a problem, but in Sleep No More, it’s part of the experience.

According to production director Tiffany Zhang, who helped bring Sleep No More to Shanghai two years ago, the show’s directors and production team were nervous about how supposedly shy, cautious Chinese audiences would respond to a play that asked them to stop being passive receptors of a story and instead play an active role. Apparently, they needn’t have worried. 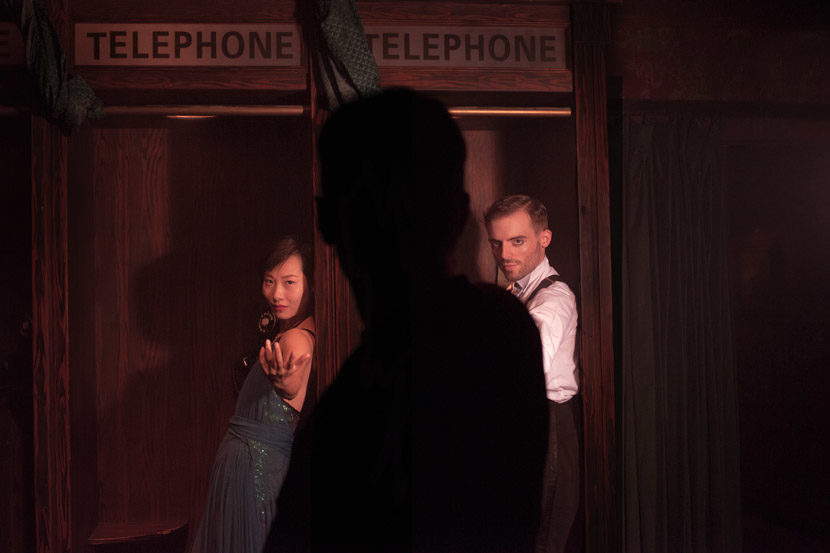 A photo from the Shanghai adaptation of Sleep No More, Jan. 1, 2017. Courtesy of Jiang Fan

Chinese audiences have taken to the active role. “I went on my own; I directed myself,” an audience member I interviewed after the show told me with a hint of pride. One of the show’s most well-received elements, one-on-ones—interactions that take place when a character singles out an audience member and pulls them aside to share a detail that can’t be found anywhere else—has proven particularly popular in China. According to Zhang, the Shanghai staging has added a number of one-on-ones in the two years since the show began its run. Some fans have gone to see it hundreds of times in an effort to see them all.

But Chinese theatergoers’ fascination with Sleep No More goes beyond pure entertainment and speaks to a deeper need. Zhang told me how, when one of the characters would reach out to the audience for a one-on-one, there would be 20 hands reaching back. People I spoke to after the show praised the multiple storylines and freedom to choose whichever ones they were interested in. Sleep No More is another incarnation of Macbeth, yes, but one that plays with the relationship between fate and free will to suggest that a worthwhile tale can be witnessed only by making personal, autonomous choices. It tells citizens of a country of 1.3 billion that they can and should be singled out, that their decisions matter, and that anyone can be a protagonist.

The desire for an individualized experience isn’t unique to China, but given how often netizens complain these days about being reduced to passive actors in their own lives, its potency here shouldn’t be underestimated. Whereas more traditional incarnations of Macbeth focus on the king, Sleep No More focuses on the kingdom. Zhang told me that, as of last year, immersive theater has been cropping up all over China.

“I think [Sleep No More] opened this small door,” she said. “There are more and more people interested in this kind of art—or rather, experience.”

This isn’t to say that the show has been met with unanimous praise. Zhang told me the production has received complaints about hard-to-follow storylines, and critics have expressed frustration at the sometimes chaotic crowds. Overall, however, while previous generations may have had an easier time connecting with communal, shared narratives meant to be passively taken in, younger Chinese seem hungry for something else. Sleep No More, aims to do more than just offer a space where audience members can exercise their own agency: It is—as Zhang told me—a way to “get it back.”

Sleep No More likely won’t be the last adaptation of Macbeth to appear in China: The Royal Shakespeare Company, for one, has commissioned a new Chinese translation of the play that may well spark renewed interest in the story. But for the moment, a tale that at different times in modern Chinese history has offered space for political commentary, expressions of patriotism, and cathartic reflection is resonating most as a vehicle for personal agency and choice. Macbeth may indeed be full of sound and fury, but now, more than ever, it can signify anything—to anyone.

This article originally appeared in SixthTone on December 30, 2018, and has been reposted with permission.