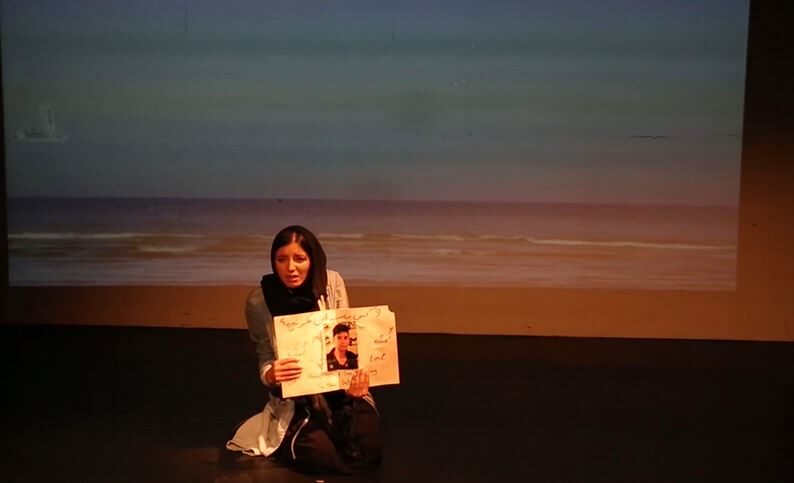 I saw Amid the Waters amid the hustle and bustle of Tehran’s downtown at Tehran City Theatre Complex in August. Sāmirih Rezāeī, who wrote, directed, and played the lead role, is of Afghan descent but was born and raised in Iran. She is also an educator and documentary filmmaker.

During one of her workshops for young Afghan adults in Tehran, Rezāeī met Mujtabā Mūsavī, another second-generation Afghan immigrant, whose recent failure to cross into Europe convinced him to resettle in Tehran. Together they wrote a series of monologues based on their experiences and stories from the community of Afghan immigrants in Tehran and its suburbs. The creative and rehearsal process took three years and resulted in a seventy-minute, two-person play called Amid the Waters. It ran for thirty nights at Theatre Workshop (Tehran City Theatre Complex).

The play’s narrative is divided between two parallel monologues and blended with documentary video footage created by Rezāeī. The juxtaposition of the two monologues drives the plot from past to present and dramatizes the characters’ fears, insecurities, interpersonal conflicts, and endless limbos spent waiting. Rezāeī waits for a call from her lost brother, and Mūsavī waits for the Iranian criminal court’s verdict on his accidental crime. The play is a docu-drama inspired by the real-life story of Rezāeī and Mūsavī, who have lived in Tehran for about four decades. Despite being born and raised in Iran, they have no identification documents and lack the legal status required for employment and purchasing or renting property. With non-existent social lives and uncertain futures, Rezāeī’s brother Mahdi and Mūsavī decide to undertake the perilous journey to Europe across the Mediterranean Sea, exposing themselves to the elements and the threat of smugglers.

There is a screen at the back of the stage. At the start of the play, it displays a projection of close-up shots of a drowning woman wrapped in a black veil and fused with bubbles, followed by a series of Rezāeī’s childhood photos and lyrics of a lullaby.

The juxtaposed monologues by Rezāeī and Mūsavī then begin. Rezāeī narrates her childhood memories of working on turnip farms with her mother, being bullied at school, getting punished by her teacher, and the last memories of her mother before her death. Mūsavī recounts his upbringing among the neighborhood’s gang of hooligans, and the brutality and discrimination he faces at work because of his refugee status.

The monologues are interspersed with scenes, Rezāeī’s monologues about her brother’s journey to Europe, and two sets of videos. These include documentary footage of young Mūsavī talking with Rezāeī about his determination to leave Iran and news reports of migrants on boats and landing on European beaches. In the scenes, Mūsavī plays Rezāeī’s brother’s smuggler, and Rezāeī is Mujtabā’s mother speaking in a Dari accent. These portray small slices of the lives of Afghan youth, along with a frank and detailed rendition of Afghan immigrants’ vulnerabilities. One of the videos shows Mujtabā’s conversation with Sāmirih before his failed attempts to flee Iran. The contrast between the present-day Mūsavī, and the past Mūsavī in the videos depicting his unflagging zeal to leave Iran, adds thought-provoking layers to his growth from a child to a man. This non-linear narrative aligns with the scenes’ confessional undertones and imaginary conversations that are enacted in an alienating style of acting. During their conversations, they gaze at the audience rather than looking at each other. The confrontational quality of this style drags the audience out of their comfort zone. The two most moving scenes are toward the end when both characters describe their endless waiting. Rezāeī stands in front of a backdrop of the sea and holds a notice of a missing person in silence. This is accompanied by Mūsavī’s constant sense of uncertainty during his imprisonment in Iran. The key element of the set design is the five lengths of barbed wire separating the stage from the front rows of Theatre Workshop’s small auditorium. In addition to the symbolism of barbed wire as confinement and entrapment, the real-life videos and images heighten the audience’s affective engagement and establish an immediate confrontation.

Almost a year later, I can easily recollect several scenes from the performance. This is due to the originality of the narrative about the Afghan diaspora in Iran, and the urgency and resonance it has with the universal experience of refugees. What might make the play off-putting at some points is its dramaturgy, which is formed by a patchwork of memories told through dialogue and videos. This structure means that it lacks developed characters who are not sufficiently integrated into the dramaturgy.

Nonetheless, the play’s remarkable contribution to the cultural diversity of the Iranian stage and the timely message it conveys makes it a worthy and memorable production. The fact that the cast is of Afghan descent and uses Dari Persian accents indicates Iranian theatre is trying to respond to the interests and expectations of its increasingly diverse audience. Productions like this foster dialogue by bringing underlying issues relating to minorities in Iran to the fore, and reminding audiences of their ethical responsibility for the injustices that happen to Afghan immigrants. They also remind us how Iran’s legal and administrative systems fail immigrants. Such productions invite theatre artists and authorities to ask whether Iranian theatre is culturally pluralist. Poster of Amid the Waters

The play’s relevance is striking, particularly given that a new enthusiasm for migration is spreading among Iranian young people who do not live in war zones. As Rezāeī notes in an interview with Mehr News Agency, her focus has been less on Afghan migration and more on migration as a universal topic. According to the United Nations High Commissioner for Refugees (UNHCR), Afghan refugees make up the second-largest refugee population in the world. Continuous war and persecution have forced them to flee their country and resettle in Pakistan, Iran, and other countries around the world. In recent years, however, international economic sanctions have aggravated economic constraints and living conditions in Iran, forcing migrants to move to the European Union.

Amid the Waters is a poignant portrayal of displacement, constant resettlement, identity, waiting, and uncertainty within diasporic communities in the Middle East. The performance raises more questions than answers, but at the heart of each tragic question, there is hope for improvement to immigrants’ legal status in Iran, and changing the cultural landscape of the country. This hope deserves additional attention and discussions. 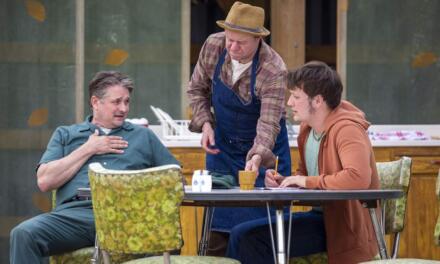