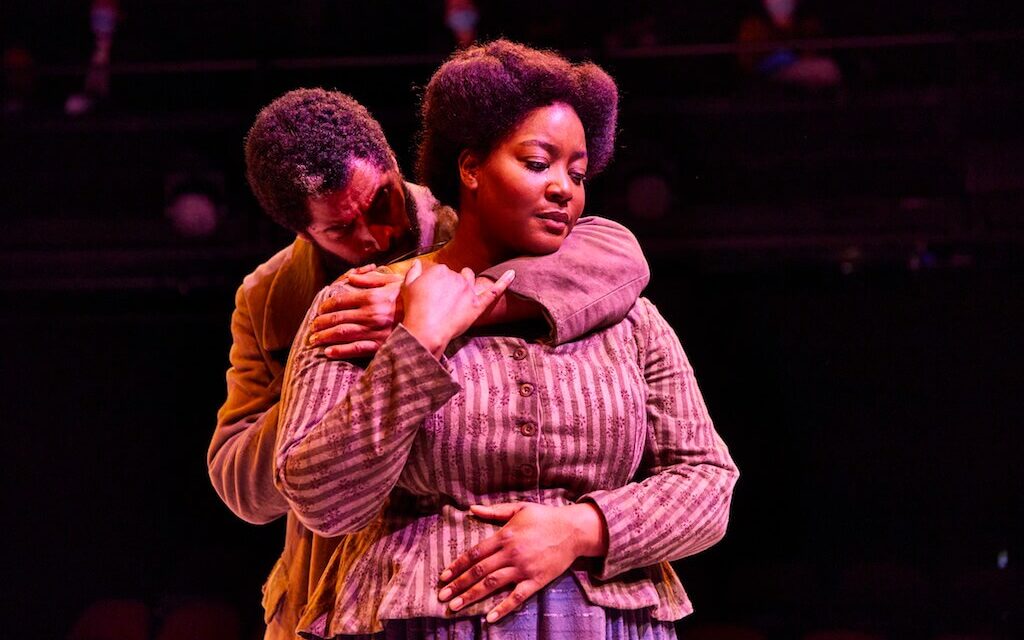 Karl Collins and Rochelle Rose in "Rockets and Blue Lights" at the National Theatre. Brinkhoff Moegenburg.

“There’s a sidestep that Europe does where it takes itself out of the triangle… I’m never quite sure how that sleight of hand is achieved, but it’s like, slavery, it’s that American thing, we don’t have to worry about it,” said playwright Selina Thompson when talking about Britain’s role in the transatlantic trade of humans from Africa. She’s not wrong: The narrative of slavery in the UK has long been shaped by the celebration of white abolitionists, while the violent part is often obscured.

Most plays, television shows and films about slavery are set in the US. They tend to repeat the same traumatic images of violence against Black people as if there is no other way of getting the horror across than in such visceral and gruesome scenes, particularly those involving Black women.

Speaking about Black British director Steve McQueen’s film 12 Years a Slave, and many films like it, Black feminist cultural critic Bell Hooks said: “If I don’t see another Black woman naked, raped and beaten as long as I live, I will be just fine.”

Five recent plays by Black British women have taken this on as they tackle Britain’s missing history, rewriting the record of it as “the country that ended slavery.” They do not resort to violence to show the seriousness of their stories but do so through thoughtful writing and by drawing connections between real stories from our past and our present.

A play in three parts, Tucker Green’s Ear for Eye, which has recently been adapted into a film for the BBC, is about the different ways that racism plays out in the UK and USA. While part two explores the power of language and how it can be weaponized to create dangerous stereotypes in the media and in conversation, parts one and three show clear threads that connect contemporary police brutality against Black people to legacies of colonial violence.

Part one portrays African American and Black British parents having “the talk” with their sons about how to conduct themselves when they’re stopped by the police. Many Black parents will know this talk; it stresses how the onus is placed upon young Black men to behave in ways that avoid appearing “threatening,” “aggressive,” “belligerent,” or “provocative.” Yet, the play suggests that any gesture he adopts can be misinterpreted.

Intergenerational conversations about civil rights and contemporary activism are interspersed with scenes describing police officers teargassing Black protesters and using aggressive and humiliating arrest techniques. These are similar to scenes that played out across the world in 2020 as many protested against racial injustice and police violence.

Part three features excerpts from the US Jim Crow segregation laws and the British (Jamaican) and French slave codes, which are read aloud on camera by white actors and non-white actors. While US laws focused on keeping Black people and white people separate, British slave codes legislated the brutal punishments of runaways. Hamstrings were cut following a second attempt to escape and death was the punishment for a third. These infringements of Black human rights show how contemporary violence against Black people stems from much longer histories of racism.

The Gift also uses a three-part narrative structure that moves from Brighton in 1862 to the present day rural English countryside.

A story about the adopted African goddaughter of Queen Victoria, Sarah (Forbes) Bonetta are paralleled with present-day Sarah – “a black middle-class woman staying in a Cheshire village with her husband and [white adopted] small child.”

Okoh implies that colonial ideas about race continue to shape understandings in the present. This is clear when well-meaning white neighbours drop by for a cup of tea and microaggressions start to slip out in comments about it being unusual for Black parents to adopt a white child.

Contemporary resonances are also evident in Juliet Gilkes Romero’s The Whip, which focuses on the abolition of slavery in 1833. This play moves the narrative away from the celebration of white abolitionists by providing a backroom view of British politicians wrangling about abolition in parliament.

Gilkes Romero focuses on the much-obscured part of this legacy – the £20 million borrowed to pay to “compensate” owners of enslaved people for the “loss of property.” This was such a large debt (the modern equivalent of £17 billion) that it was only fully paid off in 2015 using taxpayer’s money. While enslavers were paid off, reparations to those descended from enslaved people have been denied – many of whom have unwittingly paid towards this “compensation” through taxes.

A one-woman show, Salt., part of which has also been adapted for the BBC, narrates a journey that Thompson took on a cargo ship in 2016 to retrace the transatlantic triangular route from Europe to Africa and the Caribbean. Thompson explores African-American scholar Saidiya Hartman’s notion of the “afterlife of slavery,” which is the idea that a racial logic that was established during slavery continues to disadvantage Black people through “skewed life chances, limited access to health and education, premature death, incarceration and impoverishment.”

Thompson shows how colonial dynamics are reproduced in racist and sexist assertions of power on the ship and on the surveillance of her Black female body as she passes through border security controls. She experiences contradictory feelings as a Black woman visiting the dungeons of the notorious Elmina’s Castle in Ghana, where enslaved people were held before being transported, and in Jamaica, where she recognises the implicit racial dynamics of the tourist industry.

Rockets and Blue Lights uses a dual narrative framework that is set in the present and the past. One strand portrays the making of a film about J.M.W. Turner’s 1840 painting, “The Slave Ship” in the present day. The other strand is set in 1840 as “Londoners Lucy and Thomas try to come to terms with the meaning of freedom” and Turner boards a ship to research the sea for his paintings.

Turner’s painting is believed to be a response to the Zong Massacre of 1781, when the captain of a ship ordered the crew to throw 133 enslaved people overboard so that he could make an insurance claim for the loss of cargo.

Pinnock’s use of past and present questions the responsibility of storytellers when exploring enslavement. The Black actress in the fictional film challenges the director’s decision to cut aspects of her story to give more space to Turner’s. This draws attention to how certain stories are written out of historical narratives while others are foreground.

This article was originally posted to The Conversation on October 25, 2021, and has been reposted with permission. For the original article, click here.