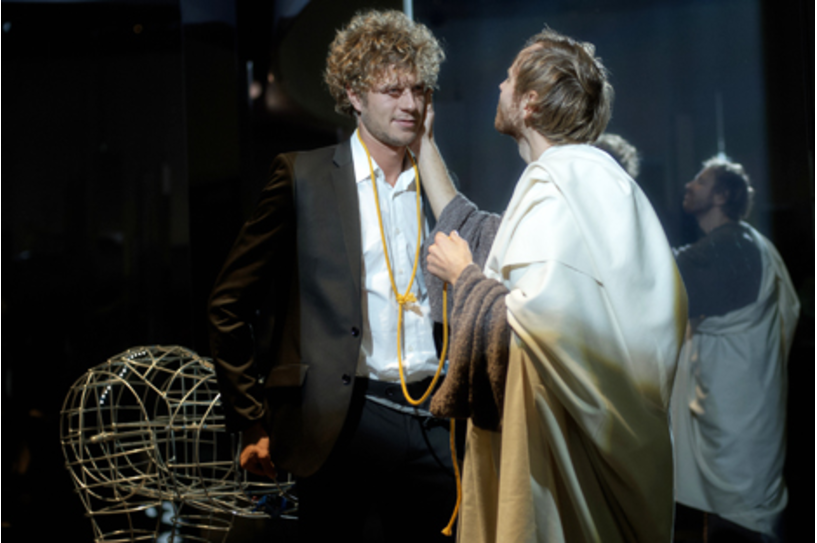 The premier of Telluria caused little controversy when it opened in St. Petersburg. Maybe Russian theater is finally ready for the writer’s dystopian view of the world.

St. Petersburg’s Alexandrinsky Theater opened its New Stage season at the end of September with a stage version of Vladimir Sorokin’s novel Telluria. The dystopian work is made up of a series of stories in which Russia is broken down into small princedoms in a kind of future version of the Middle Ages. The princedoms are populated not by people, but by fantasy characters and exaggerations of stereotypes. Among the characters are cynocephali (dog-headed men), centaurs, dwarfs and giants, Orthodox believers, crusaders are all looking for happiness in the form of a magical metal whose deposits are found in the new state called Telluria.

This was not the first time a version of Sorokin’s work has come to the stage, but it may have been the first time one was performed without significant controversy.

Scandals seem to follow Vladimir Sorokin, one of Russia’s most vivid postmodernist writers. His dystopias with gloomy pictures of an apocalyptic Russia won him plenty of fans, but also alienated members of Russia’s conservative literary establishment – as well as some of the public at large.

The group filed a lawsuit against Sorokin alleging that his 1999 novel Blue Lard, which depicts sexual encounters between clones of Stalin and Khrushchev, was pornography.

In 2002, they erected a toilet bowl outside the Bolshoi Theater and invited people to throw Sorokin’s books in. Later that year, the group organized a protest outside the Ministry of Culture. More than 300 people attended.

Sorokin’s international profile grew when the Bolshoi Theater commissioned a libretto from him for the new opera Rosenthal’s Children, which debuted in April 2005. The opera, which was composed by Leonid Desyatnikov, was the Bolshoi’s first operatic world premiere in 26 years.

In the opera, a German doctor by the name of Rosenthal clones five great composers: Wagner, Verdi, Tchaikovsky, Mussorgsky and Mozart in the early 20th century. When the Nazis come to power, the doctor and his clones immigrate to the Soviet Union where they are forgotten; they sink to the very bottom of society and become wandering bums. In the end, they all drink some counterfeit vodka and die, except Mozart, who is immune to poison.

Walking Together protested outside the theater and the State Duma passed a resolution ordering the Ministry of Culture to assess the moral character of the work. As a result, tickets for the performances sold out months in advance.

Sorokin has outlasted his Kremlin-backed foes – Walking Together (disbanded in 2005) – and it appears he has found a kindred spirit in Marat Gatsalov, the director of the Alexandrinsky’s New Stage, who championed the production of Telluria. Born in 1978, Gatsalov was part of the first generation of Russian directors able to stage contemporary Russian drama. While at the Stanislavsky Theater, Gatsalov staged I Don’t Believe by Mikhail Durnekov, inspired by Stanislavsky’s autobiographical book My Life in Art. The play is about how the Russian psychological theater began – among the characters are famous directors Constantin Stanislavsky and Vladimir Nemirovich-Danchenko themselves. The director portrayed them with sympathy, but without reverence, which is characteristic of Russian psychological theater as far as its founding fathers are concerned. Like Sorokin, Gatsalov seems to believe that no topic is too sacred for artistic interpretation.

This post first appeared on Russia Beyond on October 17, 2014 and has been reposted with permission.

This post was written by RBTH and Dmitriy Romendik.