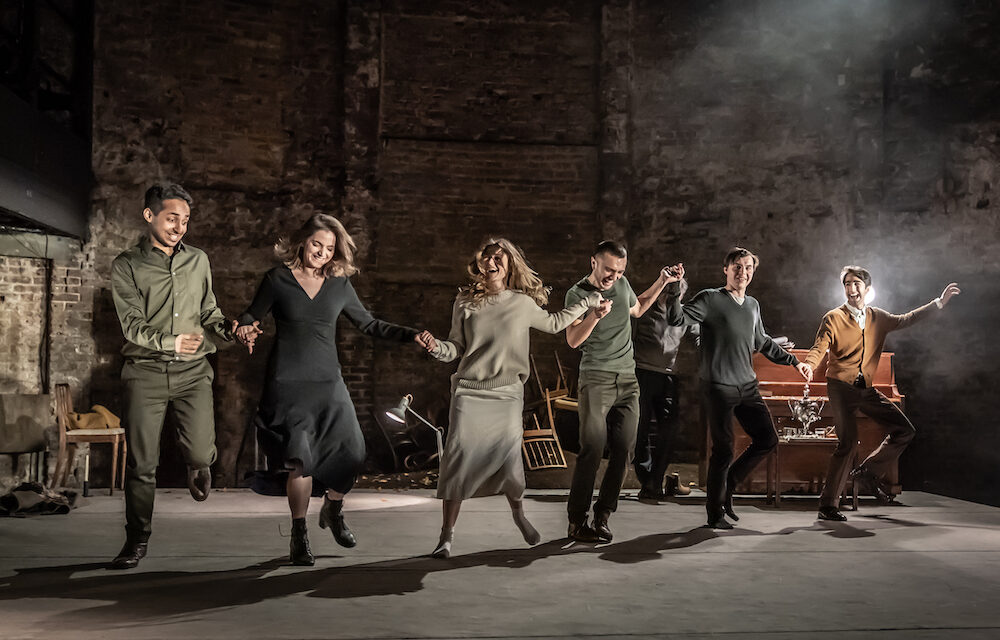 About a year ago, director Rebecca Frecknall electrified this venue with an award-winning revival of Tennessee Williams’s Summer and Smoke, rescuing the play from obscurity and showcasing the star qualities of actor Patsy Ferran. Now Frecknall and Ferran take on a much less obscure drama, Anton Chekhov’s 1901 classic Three Sisters, which has been newly adapted by Cordelia Lynn, a young Royal Court playwright whose previous work includes the very impressive Lela & Co and One For Sorrow (a kind of two sisters story). But can this dream team adequately reveal the psychological richness of Chekhov’s masterpiece?

Having grown up in metropolitan Moscow, the play’s three sisters — Olga (Ferran), Masha and Irina — are frustrated with life in provincial anonymity. When two glamorous military men, Lieutenant-Colonel Vershinin and Baron Tuzenbach, arrive in town, the emotional and sexual temperature rises. But other domestic problems intrude when the sisters’ brother Andrey marries Natasha, a vulgar but ambitious young woman who gradually wants to take over the running of the household. When she comes up against the barely concealed condescension of her husband’s siblings, she responds in kind.

More than any other great naturalistic playwright, Chekhov continues to be dogged by preconceptions and prejudices about which performance style best suits his work. Should it be set in the early 20th-century, dressed in period costume, with samovars, moody guitar music, and a gentle melancholy? Or should it be fast, furious and comic, with superfluous frills cut out and contemporary references accentuated? Given these possibilities, Lynn’s version is disappointingly middle of the road: her text is mainly contemporary in tone, with a sprinkling of Russianisms and a handful of declamatory renditions of famous passages. Much of this overly clear and most of it lacks subtext or subtlety. All the ideas are signposted and there is too much repetition. And Lynn’s desire to be fair to all of the characters, no matter how small, results in verbosity and longwindedness. Worst of all, this version is set in a never-never land which is vaguely Russian, but also vaguely British. Nowhere.

There is a feeling of plenitude and repletion, which means that nothing has been omitted, although there are many moments during this three-hour marathon when I longed for more focus and more concision. However, the central relationship between the three sisters does begin promisingly with a fresh depiction of youthful impetuosity alongside sibling bickering. These Act One exchanges underline the sense that this is a teen coming-of-age story, in which getting older means becoming disillusioned. If this simplicity gets a bit lost in the other plots and subplots, then the fault lies in the decision to include too much of everything. But at its best, which is during Act Three when an offstage fire brings a sense of emergency to the household, the pace quickens and there’s a satisfying intensity to the acting of all three siblings.

Each of the sisters makes the long journey to disappointment. Although I’m not convinced that Ferran is a natural for the role of a schoolteacher, her performance has many good moments, as when she crumbles under the onslaught of Lois Chimimba’s Scottish Natasha. She is convincingly helpless when she is unable to stand up to the domineering pretentions of her sister-in-law. By contrast, Pearl Chanda’s depressed Masha blossoms when she falls in love with Peter McDonald’s Irish Vershinin and discovers a joy in life that her pedantic schoolteacher husband, Fyodor (Elliot Levey), can’t give her. At the end, when she and her lover have to part, she radiates pain. Meanwhile, Irina, played with an extreme pleasure in playfulness by Ria Zmitrowicz, is courted by Shubham Saraf’s rather wet Baron. At one point, unable to take his advances, she buries her head in a blanket. The awkwardness between these two is very well done. As is her panic when she realizes that she will never get back to Moscow. By contrast, Freddie Meredith’s boyish Andrey has a youthful appeal but doesn’t really convince me that he is a compulsive gambler or hopeless with money.

Too often, during the storytelling, the exchanges between the characters lack the spark of emotional connection. Yet this should not distract us from some of the incidental joys of this version. For example, Alan Williams as the drunken doctor Chebutykin is a very well judged performance, and even a very minor character, such as the old nanny — played by Annie Firbank — comes across very well. Although I have my doubts about some of the playwriting, the drama’s themes of nostalgic longing, ethical helplessness and the desire to give meaning to life, to suffering and to imagined versions of the future, shine clearly in the gathering gloom. The repeated refrain, given a variety of inflections, of the importance of hard work is also clear. I just wish that this version was much more explicitly contemporary.

Frecknall’s production, which has a bare chair-littered design by Hildegard Bechtler, does tend to get bogged down in detail, and there are too many distracting longueurs. Okay, these are all in the original, but who says that you have to slavishly follow your sources? And yet. Just when I begin to feel that the whole thing is mired in inconsequentiality, Frecknall conjures up a genuinely magic moment that raises my spirits. At one point, colour photographs are projected on the Almeida’s back wall; at another, a lively dance sequence or a beautifully lit spinning top that hums bring a touch of sweet theatricality. With George Dennis’s thumping soundtrack, the most exciting episodes make you wish that the rest of this version was equally alive. Instead, the piece’s acute psychological observation is sadly dissipated.

Three Sisters is at the Almeida Theatre until June 1.

This article appeared in Aleks Sierz on April 16, 2019, and has been reposted with permission.