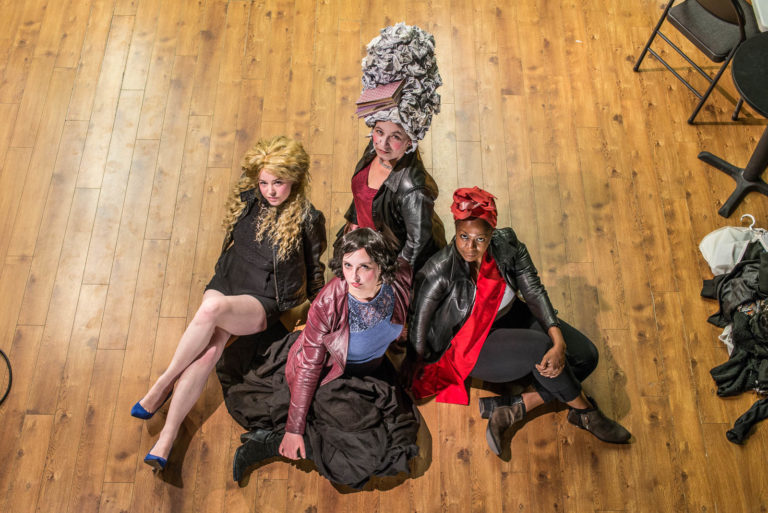 Marie Antoinette’s wig could be a play unto itself. An eye-grabber in the Three Sisters Theatre Company’s smart production of Lauren Gunderson’s The Revolutionists at The Gladstone, the wig is a beehive of crumpled, handwritten pages emblazoned with a couple of books which, in turn, are topped with an ink well and quill pen.

The wig, like the play’s Marie Antoinette, is emblematic of a frivolous, hyperbolic obsession with self and style. But it also represents the power of the word and Marie’s dawning understanding, over the course of Gunderson’s clever story about four women swept up in the French Revolution, of that power and her own responsibility to stand up for something bigger than herself.

Words, the role of art and individual responsibility underpin The Revolutionists. Set in 1793, the year that Marie Antoinette and her husband, Louis XVI, were executed on the guillotine, the play explores the French Revolution not from the usual perspective of the event’s male players, but from a women’s viewpoint embodied in the four women.

The slightly wacky and charmingly entitled Marie is played by Robin Guy.

Rebecca Benson depicts the initially timorous Olympe de Gouges. She’s a playwright struggling to put into practice her belief that art has a higher purpose by encapsulating the feminist struggle and the tenor of the times (should her creation be a musical, she wonders more than once?).

Cassandre Mentor plays the angry Caribbean champion of slaves, Marianne Angelle. Her fever pitch in the early going could be a reminder that angry women are rarely thought of favorably, but it does get tiring. Fortunately, like the other characters, Marianne becomes more nuanced as the story evolves.

Victoria Luloff is Charlotte Corday, the assassin of the French revolutionary Jean-Paul Marat. Luloff is terrific, subverting her character’s innocent gaze with a spine-stiffening single-mindedness that one wishes some Republicans would show toward Donald Trump.

The four characters—sometimes battling each other, sometimes offering emotional and intellectual support in a fraught time–join forces in taking a stand for women and trying to correct the French Revolution as it veers off track.

In exploring these four people and their varying revolutionary leanings, Gunderson gleefully mixes history, fiction and the odd delicious anachronism (it’s hard to say whether the matches briefly displayed in the play, and not invented until the 1820s, are a deliberate anachronism or a production blunder).

Gunderson underlays the story’s comedic elements with the high seriousness and dread that the guillotine, never far from our or the characters’ consciousness, demands. “It’s so nice to pretend there’s nothing wrong in the world,” chirps Marie at one point, a funny reminder that things are very much wrong.

It’s no spoiler to mention that things go really wrong for some of these characters.  But in the process, they strike a blow for, as they say, “Liberté, Egalité…Sororité!”

Like any revolution, Gunderson’s play could go awry, its impassioned core and characters dissolving into silliness and self-indulgent performances. Under director Bronwyn Steinberg (who’s also showing her directorial metal in Raising Stanley/Life with Tulia at the undercurrents festival), that doesn’t happen. Instead, the edges are kept as sharp as Charlotte Corday’s knife.

Andrea Steinwand’s set of gigantic books, letters, and rolls of paper works superbly, and the reliable Vanessa Imeson’s costumes capture the spirit of late 18th century France, where women’s bodies were both encumbered and on display.

This article was originally published in the Capital Critic’s Circle on February 16, 2019, and has been republished with permission. 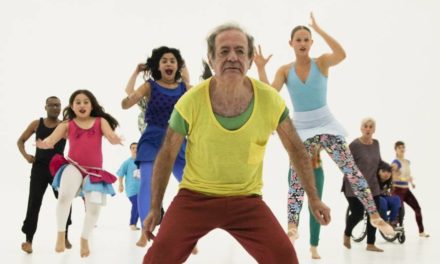