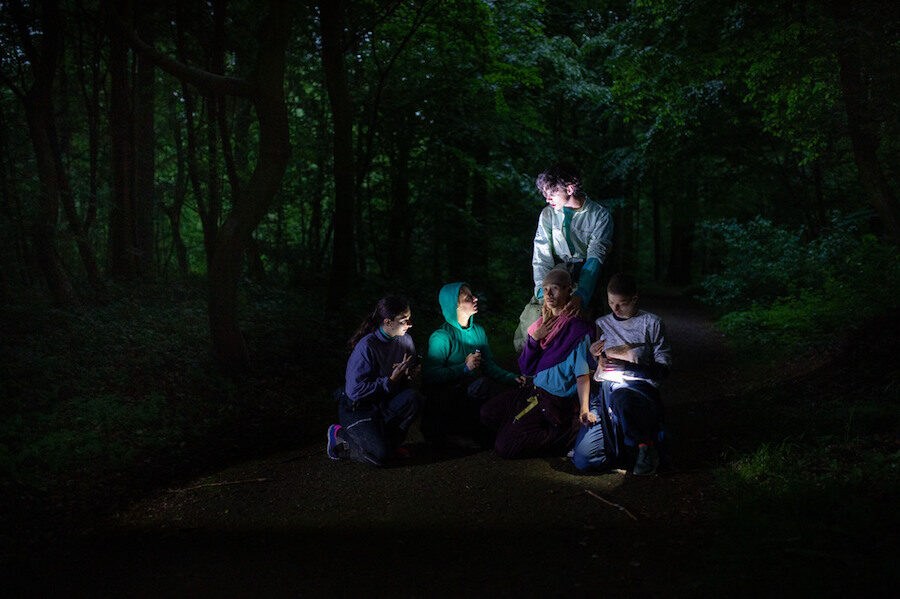 Engaging choreography in a green discourse

Anyone associating ‘De Keersmaeker’ and P.A.R.T.S. mainly with ‘dance’ is surprised by the fact that over three quarters of the ‘choreography’ and performance informing Somnia pivots on the narratives adapted from William Shakespeare’s Midsummer Night’s Dream (1595/96) and Johannes Kepler’s Somnium (1608)—the former being much more recognizable in the show than the latter.

Although this is not the first time Anne Teresa De Keersmaeker lays hands on Shakespeare, former pieces like Partita and Golden Hours (As You Like It) only rely on works of the literary icon as ‘hidden metanarrative’ and sources of the composition of ‘abstract formal movements’, respectively. Fuelled by extensive speech and, at certain intervals, musical adaptations of Henry Purcell played by a mobile ensemble of recorders, Somnia engages with bodily movements and the distribution of those movements in space as integral to spoken narratives.

The titles of these source texts suggest they are apparently about dreams. However, the way the De Keersmaekers and P.A.R.T.S. frame them, especially via the extracts in the pamphlet accompanying the show, resituates these narratives in an ecological preoccupation that Somnia aspires to have. The environmental concerns were indeed already prominent in Anne Teresa De Keersmaeker’s Golden Hours (As You Like It) and its foregrounding of ‘the utopian motif of returning to the golden world of nature, represented in the Forest of Arden’. Yet, Somnia leaves the black box and exposes both the performers and the spectators to the real natural landscape of the Gaasbeek Castle. With the extract from Midsummer Night’s Dream, the artists astutely tease out the usurpation of the natural order underlying Shakespearean conflicts and appropriate it in Somnia as an indication of a ‘human-driven climate crisis’: ‘But with thy brawls thou hast disturbed our sport…The seasons alter…The spring, the summer, the childing autumn, angry winter, change their wonted liveries…We are their parents and original’. The extract from Kepler, on the other hand, is meant to advocate an anti-earth-centric cosmology and anti-anthropocentric viewpoint—an extension of Anne Teresa De Keersmaeker’s preoccupation with the gaze we have seen in Golden Hours — whereas an anthropocentric way of looking and understanding is the key agency of the Anthropocene: ‘All Levania experiences the succession of day and night as we do, but they lack the variation that goes on all year among us…For Levania seems to its inhabitants to remain just as motionless among the moving stars as does our earth to us humans.’

Charged with its ecological and anti-anthropocentric frame, it is interesting to reason further why the project is not realised ‘in a [natural] clearing of the woods’, but, in fact, the idyllic gardens and woods of the Gaasbeek Castle—a kind of pastoral landscape whose physicality exudes the agency of human hands which keep it a well-maintained nature. Despite this potential tension, the choice of the site mostly heightens the sense of dream and utopia inherent in both Shakespeare’s and Kepler’s chosen texts.

De Keersmaekers and P.A.R.T.S. keep their spatial translation of the master narratives engaging with several techniques. First, the denaturalization of bodily representation where signifiers are at odds with the signified: the representation of one character is split across various bodies. Four performers of different sexes, genders and ethnicities, for instance, are made to represent each of the main characters of Midsummer Night’s Dream, namely ‘Hermia’, ‘Lysander’, ‘Helena’ and ‘Demetrius’. The multiplicity may be for a practical reason given the vast expanse of the ‘theatre’ in the gardens and woods of the Gaasbeek Castle. But the end result is compelling. Spectators, who at one point are divided into at least two groups with each still seeing the other, see at least two different re-enactments of Shakespeare’s narratives at the same time, though they could only hear one and not the other. It feels as if you were watching a video installation with multiple screens. This astute decentring of centrality and fixity of theatrical perspective, typical of Anne Teresa De Keersmaeker, culminates, at least according to my experience of the performance, when Helena—played by a man very convincingly cross-dressed as a woman despite her prominent moustache—hysterically enacts, while running around the spectators, the famous ‘use me but as your spaniel’ lines to one of the Demetriuses (I don’t know how many Demetrius there are!!) only to be uncannily echoed by another ‘Helena’ embodied in a different performing body, now a female one, delivering the same lines while it runs past us. As Shakespeare’s narrative unfolds at multiple places in the Gaasbeek Castle gardens and woods, spectators in Somnia are placed in Kepler’s cosmology where they are made to realise how limited and relative their experience, perceptions and knowledge are. Choreographically speaking, this multiple production of the same narrative at different spatial points, by different bodies, yet during the same time, can be seen as an astute extension of Anne Teresa De Keersmaeker’s ‘counterpoint’ technique, which she appropriates from music, to engage her practice in the timely anti-anthropocentric discourse. Indeed, if Somnia’s desire is to make an impact in relation to the ecological discourse, this is how it spatially, very subtly, yet very strategically, achieves it.

Other strategies keeping the choreographic and spatial transposition of the metanarratives engaging are when the artists mobilize a well-orchestrated set of contrasts between, first, the distance and proximity between the performers’ bodies and that of the spectators (you can really feel the intense velocity when they run past and around you in Anne Teresa De Keersmaeker’s signature spiral and vortex patterns). This also includes the assemblage of the spectators themselves in the enclosed circular ‘clearing’. Second, the contrast between sound and silence and between light and darkness. This is most intensely experienced at the moment nearing the ‘climax’ when the main characters of Midsummer become completely exhausted after running after each other in search of—or, in the case of Puck under Oberon’s order, in an attempt to effect—requited love. At this moment, they eventually, collapse on the ground. (The spectators are deliberately made to feel this exhaustion, too, given that the show is made to unnecessarily last for more than three and a half hours.) One woman beside me has her feet literally entangled by the sleeping body of one of the Helenas. After the intense commotion and noises, and just as the natural light completely goes out and the darkness crawls in, the whole enclosed circular garden of the Gaasbeek castle falls suddenly quiet. It becomes magic. You feel the breeze caressing your skin. You hear the trees above rustling. You yourself stop and take deep breathes. You are for a moment one with nature again.

After this climactic purge, the staircase leading upward back to the castle is lit by almost, if not, all of the forty-four performers whose arms form what I interpret to be ‘a wedding’s archway’ up the stairs. Now the jolly music comes back and we all are celebrating us spectators’ participation in Midsummer Night’s Dream’s denouement, acting out the reconciliation scene when the main characters resolve their conflict in the wilful marriages—another witty interdisciplinary twist bringing together literature, theatre, performing arts and visual art where the strategy of participation flows in and out of one another.

The very end of Somnia sees a dance performance by P.A.R.T.S. in front of two bonfires. The choreography captures the ethereality of the Midsummer Night’s Dream’s fairies and the joyful spirit of the marrying mortals after the reconciliation of Oberon’s ‘unnatural’ intervention into nature.  The geometric pattern of the spiral, which Anne Teresa De Keersmaeker herself once said is almost a fetish for her, is perhaps the most outstanding of all forms visible in the pleasingly airy choreography of this ecological appropriation of Midsummer. Speaking at the Collège de France, she said, ‘Spiral is the figure of the conception of life. You turn, you change, then, you find yourself at the same site as before but no longer in the same place.’ ‘The spiral has decentred me and I reread them in the light of the experience I have acquired.’

Ending an anti-anthropocentric project with this notion of ‘life’ as encapsulated in the form of spiral, signals the artists’ optimism in humanity in relation to nature. As if whispering through abstraction that if we want to live on and sustain life, we may want to reflect and do that outside the remit of ourselves so that we are no longer at the centre of our thinking.

This piece first appeared on Etcetera and was reposted with permission. 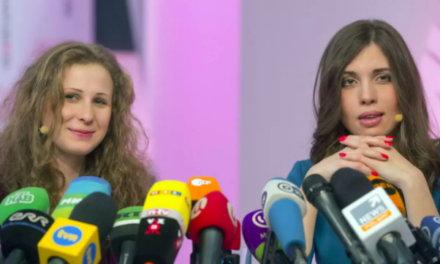