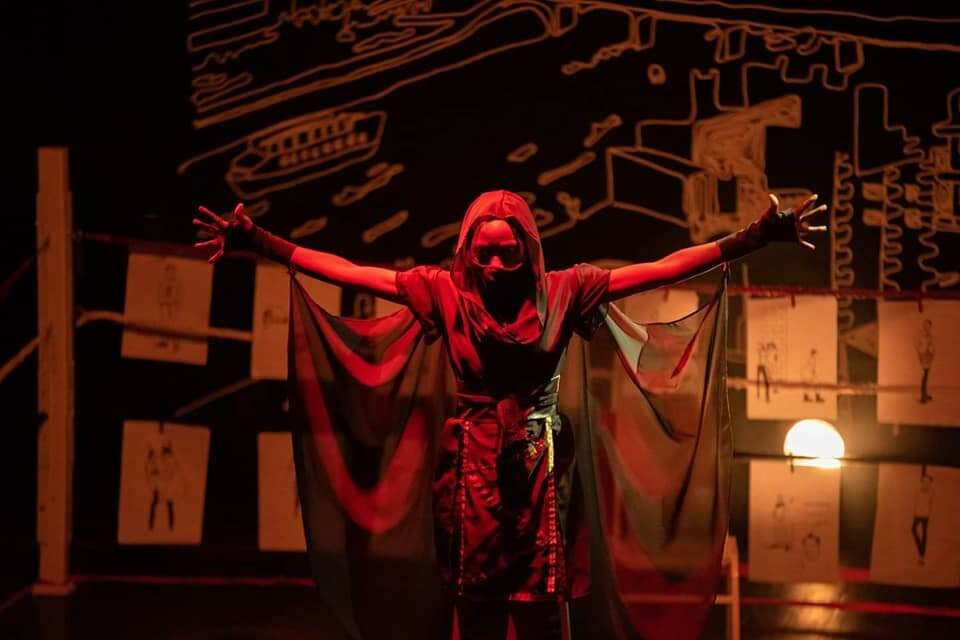 Silent Voices has always got such technical aesthetics of lights, costumes and sound but this time around, you could sense they outdid themselves. Photos by Zahara Abdul

Silent Voices Uganda has for many years now outdone themselves while producing theatre. From a set on wheels in Ga-aD!, Just Me and the Silence or Holy Maria to swift transitions between these plays, it is clear the director, Adong Judith is always trying to push the envelope.

And she did the same with the latest production of a two-cast play that was her re-imagination of Sara Sharaawi’s Naqabi Ninja. It is an Egyptian play about Hana, a girl that has been sexually assaulted and seeks revenge in the form of a vigilante, an avenging crusader like those in comics.

Of course, one of the first things many thought about was how Adong was intending to place a superhero on stage – how she would work with such costumes, action sequences and yeah, such effects. Yet, when the show premiered at the National Theatre in Kampala on July 19, it was clear she had done her homework well enough; her two actors did not leave anything to chance but neither did her technical crew.

Of course, Silent Voices has always got such technical aesthetics of lights, costumes, and sound but this time around, you could sense they outdid themselves. In a Facebook post earlier, Adong had celebrated a rehearsal when she noted that never in Uganda has she worked with a light designer and thus was thrilled – but that was the beginning of what was in store for the audience.

Sharaawi put together an ugly episode that details rape and assault that women protesters who showed up at the Tahrir Square went through during the 2011 Arab uprising that Egypt was part of. 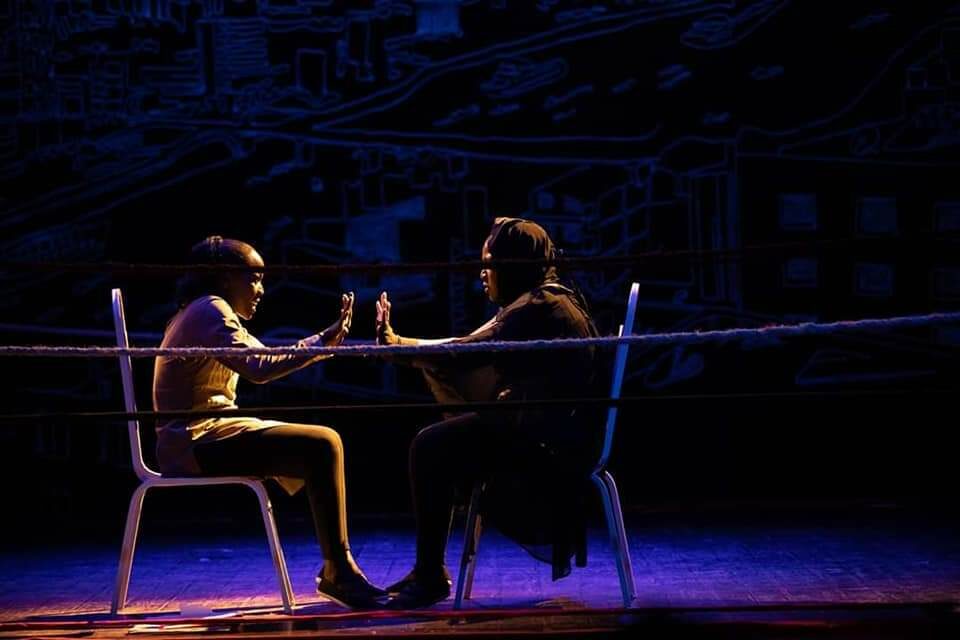 The production is the other face of this revolution. The unfortunate ugly truth is known only to some people. The injustices committed against some women that came out to protest the government along with fellow Egyptians.

The playwright is explicit in many ways, especially while describing the famed circles of death; It has been documented that in the Tahrir Square, public mass organized sexual assault took place; in these assaults, men would encircle a woman while outer rings of men deter rescuers. The attackers regularly pretended to be there to help the women, adding to the confusion. Women reported being groped, stripped, beaten, bitten, penetrated with fingers, and raped.

Brought to life by bankable actress Rehema Nanfuka and Zimbabwean actress and TV personality Lisa Gitu, Niqabi Ninja takes place in a boxing ring, with a backdrop of Cairo – here, Nanfuka’s Hana draws the different scenarios she has been assaulted as Gitu’s Ninja encourages her on how she should deal with those responsible. 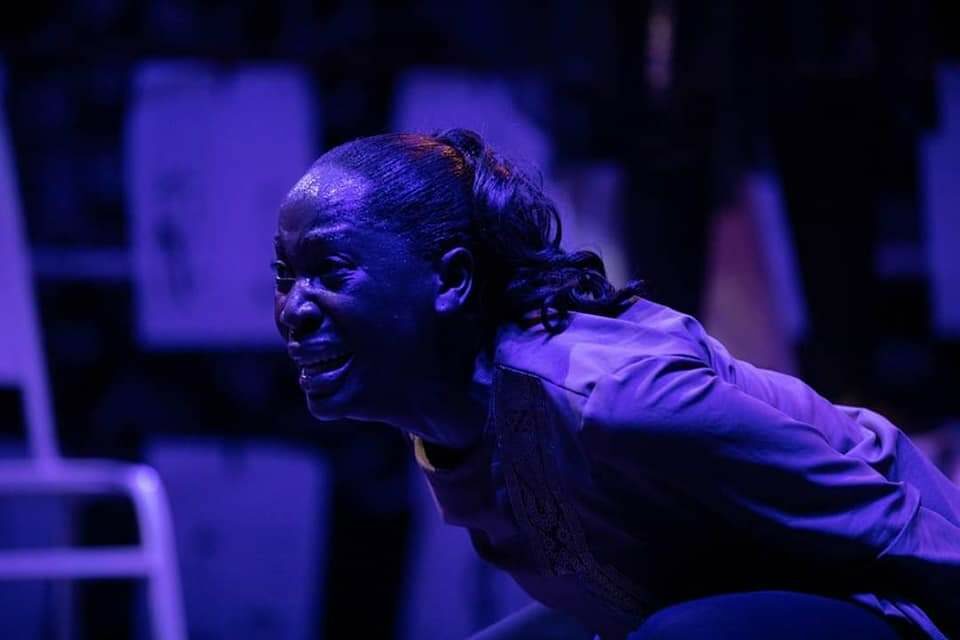 Much of the play tends to talk about the extreme length the abuse led Hana to and eventually turned her into the vigilante, Niqabi Ninja – the production is her process of turning into one.

But much of  the strength was the technical team that included the art design and music among other things – for instance, the lighting designed by Dan Ozminkowski provided the much-needed surprise, changing colors to the right feel that made the show an experience; the lighting made you fear for Hana in a lonely place or pray for her as she took that jump from one building to the next. 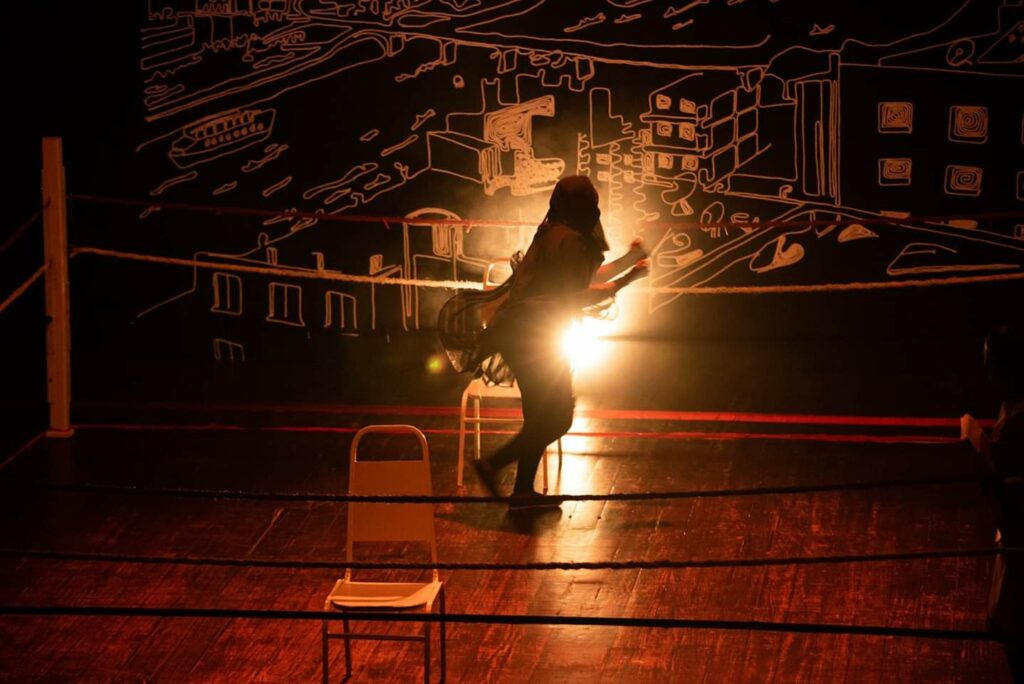 Then Kaz Kasozi’s music direction, out of his own element, he brought a sound that fused his funk, African touch, teraab, and something from the Arabs, he was believable even when he sang English lyrics. Kasozi’s team instrumentation changed the way we have consumed theatre music; he had a song for the entire production, scene, and emotion. Be it a frozen rape scene, Hana and the Ninja flexing muscles, the music had you covered and much of this was well synched in the whole production in a way that made so much sense.

By Kaggwa Andrew Mayiga. Andrew is an Arts and Culture reporter, a trained theater, music and film critic. In the past, he has served as a jury member for various film festivals and is one of the co-founders of African Movie Night Kampala and founder of the annual Nteredde Documentary Showcase.

This article originally appeared in The African Theatre Magazine on July 24, 2019, and has been reposted with permission.