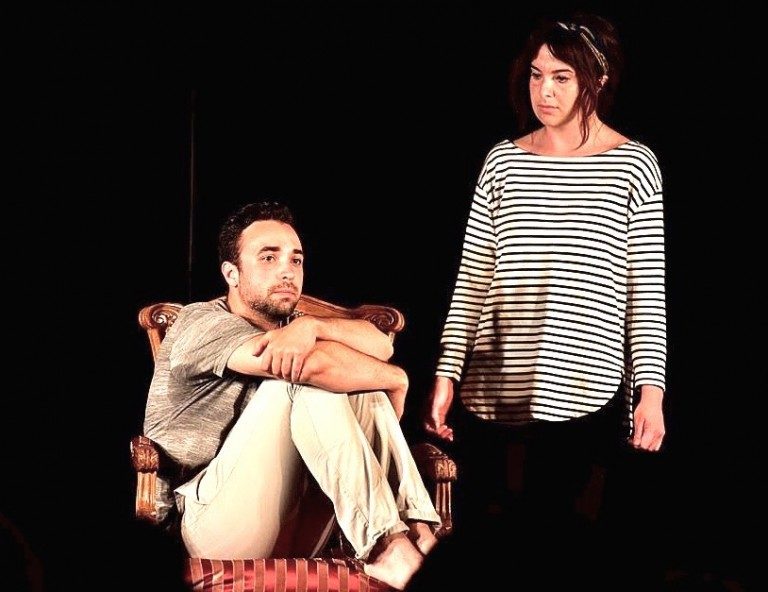 What do we mean by “home?” This is the central question posed by Romanian playwright Andreaa Bortun in her play Ashes Afar, recently performed in English at the Romanian Cultural Institute in London’s Belgrave Square. Bortun’s raw and uncompromising script shows us glimpses of the lives of a migrant couple from two different cultures living in a third culture and the conflicts and misunderstandings that arise in this increasingly common European scenario. Aine, played by Crissy O’Donovan, is a fiery Irish girl who lives with her partner – the brooding, reclusive Mihail – in a series of rundown flats in London. Hopes of finding fame and fortune and a better life soon fade, and when the couple faces a crisis in their relationship, Mihail’s attempt to evoke past memories in a therapy game causes further conflict and pain.

Performed on the small stage on a bleak set with only a spinning armchair to indicate the series of grotty flats the couple inhabits, the audience is immediately drawn into the bleakness and emptiness experienced by the émigré pair. The new space at the Romanian Cultural Institute is ideally suited to such a production which is short – just about an hour, but nevertheless corruscating in its intensity.

In this small, intimate setting O’Donovan’s poignant portrayal of a woman literally losing her mind sometimes makes uncomfortable viewing, as she visually and verbally documents the stages of Aine’s breakdown. Liviu Romanescu as Mihail gives a measured and thoughtful performance in a dual role, skilfully distinguishing between the two characters in stance and tone. Both actors use all their considerable skills to extract every nuance from Bortun’s tight, dense script which in every scene questions, challenges and confirms the audience’s assumptions about the true nature of the couple’s relationship.

How reliable are our memories? How do trust and power determine the course of a relationship between two people in crisis? The sweetness at the start of the couple’s life together, fuelling their upward trajectory in London, eventually sours when, like all couples, they hit an obstacle. Alone in a foreign land with no support mechanism and faced with the daily grind of starting a new life from scratch, their relationship fragments, the cultural differences and references exacerbating the wounds. The healing process proposed by Mihail is raw, cruel and manipulative….or is it? Romanescu skilfully depicts a man whose passivity masks something far more sinister whilst O’Donovan displays a fragility and vulnerability which disturb and unsettle the viewer.

And what is home? Is it where you live or where you come from? Can you really make a new life and a new home for yourself in a foreign town, given that we now live in a transglobal society where attitudes, influences, and opportunities appear to be the same for all? The experiences that Mihail and Aine have in post-Brexit London suggest the dream of a unified Europe with free movement and cultural interchange is still just a dream, although tantalizingly desirable.

Established in the UK in 2014, the Vanner Collective, the team behind Ashes Afar, was awarded Best Production, Best Play and Best Female Performer for the play at the Bucharest Fringe in 2015 and the production was very positively received at the Edinburgh Fringe in 2015. Led by Andreaa Bortun and Bopi Pricop, Vanner is an international team of theatre-makers dedicated to producing and creating new work, and translating contemporary texts, giving European theatre to a wider audience and promoting cultural understanding and diversity.

It’s especially important to acknowledge the work of the Romanian Cultural Institute in bringing such an English language production to the UK and promoting it to a wider audience. It’s to be hoped that this work continues, especially in the light of current European fragmentation.

This article originally appeared in Central and Eastern European London Review on April,17th 2017 and has been reposted with permission.