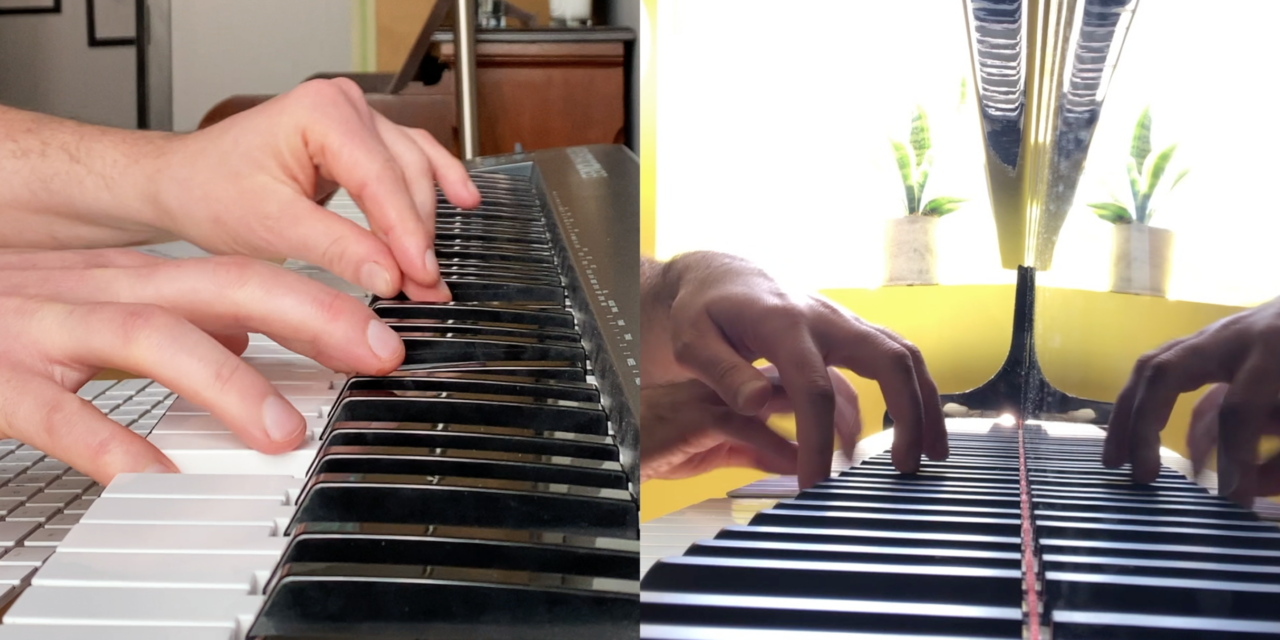 Nico Muhly and Adam Tendler. Photo provided by the author.

Throughout the pandemic, Guggenheim has been committed to financially supporting artists and providing opportunities to experience music and art through their “Works in Progress” series. Two such works that premiered on YouTube on July 12 and July 13 respectively were Let Me Freeze Again to Death and Off the Grid.

“Let Me Freeze Again to Death,” composed by Missy Mazzoli with video by Adam Larsen and mixing by Daniel Neumann, opens with a message:

Move to a dark place.

Brighten and louden your device.

Lean into your screen

(The closer the better).

Press play and close your eyes.”

Immediately I was intrigued and did as I was told, plugging in my headphones and turning off the light in my living room, plunging myself into complete darkness. Leaning into my screen I pressed play and closed my eyes. A moment passed.

Then, an electronic bass note struck my ears as red light bloomed in front of my closed eyelids. Instantly, I felt transported. Light alternately blossomed and skittered across my screen mirroring the rich bass notes and screeching chromatic runs of the synthesizer. I felt as though I had entered an alternate, abstract dimension where walls of sound and curtains of light composed my new physical space.

Just as began to orient myself to the reality of the piece, Anthony Roth Costanzo’s beautiful, rich, angelic voice appeared in my ears. A countertenor, Costanzo’s voice is heard in a vocal range typical to a mezzo-soprano female singer. Drawn to a recent recording Costanzo had made of Henry Purcell’s “What Power Art Thou” and seeking a vocal element in her work, Mazzoli sampled the recording, bringing forth something entirely new and completely emotionally effective for “Let Me Freeze Again to Death.”

Sampling is when composers employ musical excerpts from other pieces and incorporate them into their own compositions. It’s a clever way to reconceive of existing music, taking what already exists and re-imagining it into something original. Hearing Costanzo’s gorgeous and ethereal voice in combination with Larsen’s pulsing lights and Mazzoli’s buzzing instrumentals drew me in further, increasing my sense of weightlessness and immersion into the piece.

Listening to the lyrics also recontextualized “What Power Art Thou” for our time in a powerful way. While Mazzoli notes that Let Me Freeze Again to Death was written before the Black Lives Matter protests and the murder of George Floyd, she observes, “the lines ‘I can scarcely move or draw my breath’ take on new resonance amidst the daily chants of ‘I can’t breathe.’”

“Let Me Freeze Again to Death” is an entire experience. As I leaned closer and closer to my computer throughout the piece, the sound enveloping me completely, I felt the closest to experiencing a live performance that I have for all of the quarantine. Unlike many Zoom Play Readings or virtual concerts, Let Me Freeze Again to Death felt up close and fully engaged me aurally, visually, and, in a way, physically. When the synthesizer played a chromatic upward sweep with the light scampering across the screen, my skin crawled. As the piece crescendo-ed to a climax, I felt my pulse quicken and I tingled with excitement. In short, the stunning combination of the audio and video made me feel something.

When the piece ended and I opened my eyes, I sat in the dark and reflected on that feeling of being immersed in a performance, a feeling so many of us are missing and craving. I did not remove my headphones; I did not turn on the light. Rather, I scrolled back to the beginning of the video, closed my eyes, and started the piece again.

Composed by Nico Muhly for synthesizer and piano, Off the Grid is a bright and energetic duet. With Muhly at the synthesizer and performer Adam Tendler at the piano, the piece is an exciting and compelling musical experience. Characterized by rapid arpeggiated chords in the piano part with quiet support from the synthesizer, the piece journeys through a 40-chord sequence. The voicing of the chords are beautiful, and the rhythmic agitation perfectly mirrors the speed of my unsettled quarantine mind.

Adam Tendler is clearly an incredible musician. The piece is unrelenting in its movement with the piano part demanding almost constant sixteenth notes and Tendler’s playing is technically flawless and effortlessly musical. The piece is filmed as a split-screen with the focus of the camera on the musicians’ hands. As such, the viewer is able to experience Tendler’s dexterity at the keys up close.

When it came to the mixing of the piece, I was disappointed to find that I was unable to hear the synthesizer well both with and without headphones. Consequently, the synthesizer faded into the background and I was unable to fully experience the two timbres together. I greatly enjoyed the piano part, so this did not negatively affect my listening experience, but I would have wished to hear more synthesizer for a greater understanding of how the two parts functioned together.

That said, I would highly recommend viewing and listening to both “Off the Grid” and “Let Me Freeze Again to Death.” Both can be found on the Guggenheim’s Youtube channel: