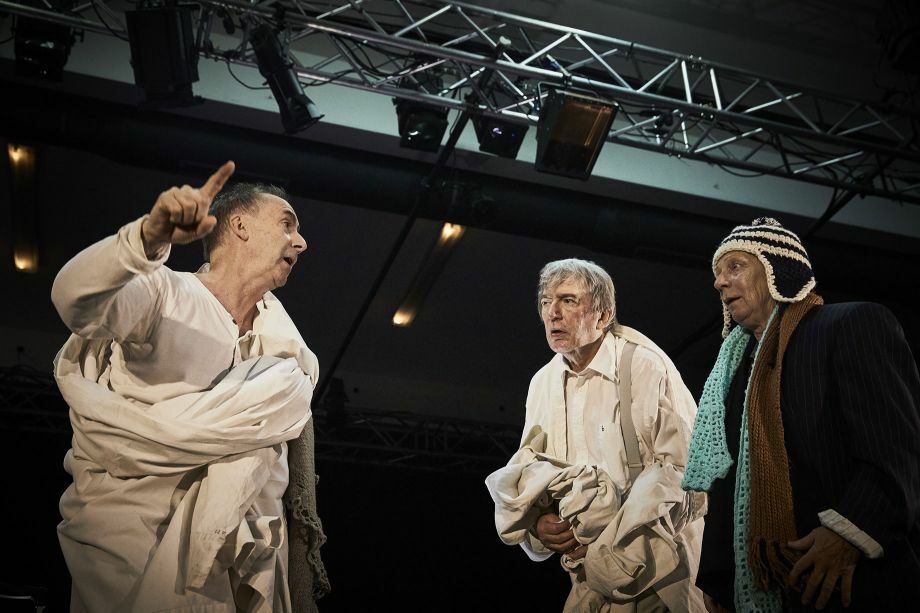 Let me tell you a secret- I love the old good comedy, its extensive gestures, inappropriate jokes, actors playing off each other, a quick change of a costume, a bit of dancing and singing; all that routine that seems to be fading away from the professional stages across the world, giving its place to serious, self-conscious, experimental and politically aware theatre. Please, do not get me wrong- all that seriousness is very important in that world that is falling apart due to its wars, economic crushes, and changes in  the environment. But comedy- people coming together to laugh and cry at their own follies- is vital too.

François Chattot, Jacques Mazeran, and Martine Schambacher- the player of Irene Bonnaud’s AMITÉ – know their craft only two well. On the makeshift stage of this traveling performance, they play with objects and props that come out of the old chest. An old-fashioned telephone, a small broomstick and a scoop, and a large case with bills and notes all acquire the life of their own in this story about human attachments and lost hopes, told by three comedians brought on stage by the genius of Pier Paolo Pasolini and Eduardo De Filippo. In fact, the play itself is an homage to amité or friendship that these two artists shared. 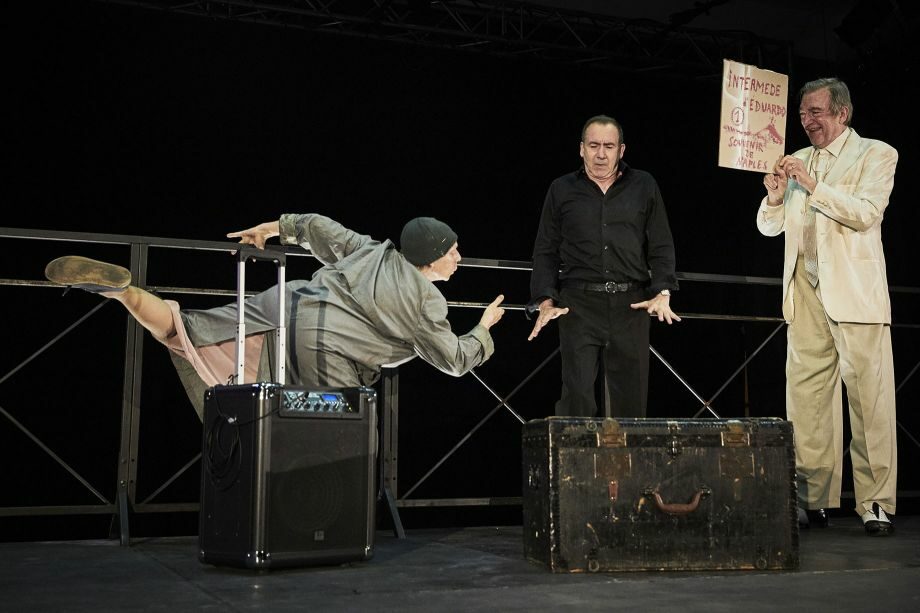 Originally, Pasolini imagined De Filippo writing the dialogues for and starring in the film himself. As the project remained unfinished, the director Irène Bonnaud decided to use this script and the fragments of De Filippo’s plays, such as The Happy Widow (1931), Christmas at the Cupiellos (1931), Locked-Up Pain (1964) and A Good Recipe (1931), to construct her own “philosophical road” performance and thus to ties the characters’ personal stories with this history of the world. “The show starts like a philosophical tale and morphs into a picaresque fable in episodes,” the director explains. “The screenplay tells the story of Eduardo, a Neapolitan wise man who is following the star to Bethlehem but to whom so much happens on the way there so, by the time he gets to the Promised Land, Christ is long dead.”

With a stylistic nod to Christmas’ pageants AMITÉ takes the audience on the road as well. The actors change costumes and characters, they move easily from one story to the next, and they change their onstage behavior as only the most professional and experienced comedians can, switching from pure comedy to direct narration, from clownish routine to tragic innuendos. Using rich and diverse devices of the artisanal tradition of theatre, they take its spectators through the array of emotions, making us laugh at and gasp in disbelief of how egoistical and selfish, but also sacrificial and giving the human nature can be. In the traditions of Italian comedies, not French, as Bonnaud insists, her production mixes genres and feelings. It gives space to the wide comic gestures and laughter, but also invites tears and philosophical thoughts.

The work of Martine Shambacher deserves a special mentioning: not only she stars in each episode of this short production, she really presents its artistic vertebrae. A truly polyvalent performer, she plays the shallowness and the depth of human experiences at the same time. Funny and awkward soprano in the opening sequence that features three operetta singers who seek professional employment, she becomes a loving with and devoted sister in the following parts.

Performed outdoors (at least during the night when I attended this performance), in the theatrical conditions that leave much to be desired, including the absence of personal mikes- a feature that seems to have become the norm in this festival’s edition- AMITÉ is really an anthem to the professional stamina and unconditional love to theatre that we associate with the work of Eduardo De Filippo and as exhibited by the three performers of Irène Bonnaud’s exuberant production. Simply- Bravo!

This article was reposted with permission from Capital Critics’ Circle.