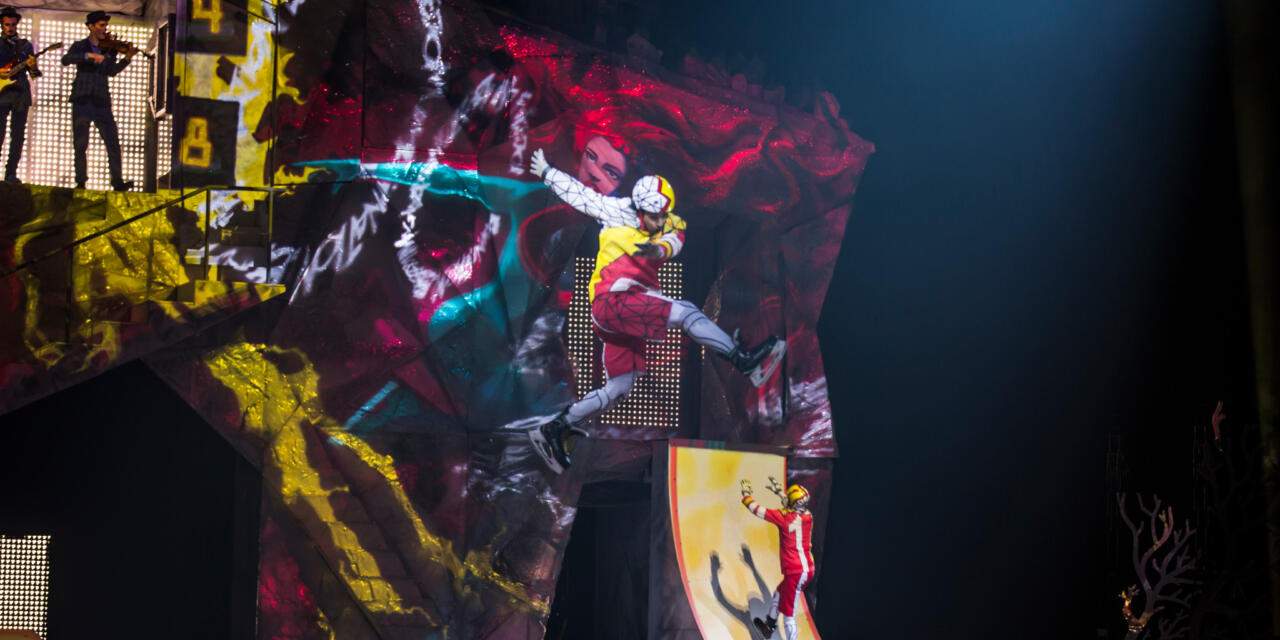 An incredible spectacle, Cirque du Soleil’s CRYSTAL is an artistic feat, blending circus arts with various forms of skating, united with a brilliantly inventive and captivating lighting, sound, set, and costume design. The creative direction by Stefan Miljevic was impeccable, as the unification of all of the creative and technical elements was seamless and completely effective in evoking a vibrant and deeply imaginative world. The performances in the air and on the ice were breathtaking, both in moments that were high energy and boisterous, and in acts that were delicate and lovely. As a circus artist and aerialist myself, I have a first-hand appreciation for the level of strength, flexibility, and artistry it takes to make an act look as effortless and beautiful as the performers in CRYSTAL did – not to mention the added element of doing the whole performance either on or suspended above a sheet of ice! The show was awe-inspiring and captivating for all – the adults in the room and the eager children – in a circus extravaganza for the whole family.

Taking place in the Agganis Arena, the story follows the journey of Crystal, a precocious young girl who is misunderstood at home and at school – known for always having her head in the clouds and failing to focus on her studies and connect with others. In her frustration at the criticisms being thrown at her from parents and teachers, Crystal escapes to the ice, furiously slicing and leaping around the rink. Suddenly, cracks begin to appear as light projections on the surface of the ice. Crystal tries fervently to escape but eventually plunges through the ice. The lights shift and suddenly, we see Crystal suspended in the air, hovering 30-some feet above the ice, slowly twisting and swimming through the air while being lowered down towards the stage as if sinking into water. The world has been turned upside-down and Crystal finds herself in universe of her imagination with quirky, altered images of her usual life. After some exploration, she finds her reflection, who hands her a pen, and suddenly, Crystal is empowered to take control of her own creativity, writing new characters and scenarios for herself and the audience to experience. 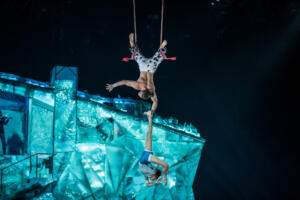 As with many Cirque du Soleil shows, the story for CRYSTAL is not quite a narrative plot, rather the show relies on an overarching concept, existing as a series of vignettes within the upside-down world of Crystal’s imagination. With such stunning performances, however, a linear plot is not necessary to maintain audience interest in the world. Even before the performance officially began, audience engagement was high, with skaters already on the ice, gliding in around illuminated pathways between winter trees, and tossing snowballs up to children in the stands for them to hurl back towards the stage to try to hit the ice-skating clown. Comedically, the clown was slapstick and silly, drawing laugh after laugh from the children in the audience, but his strengths as an acrobat was not to be overlooked. It takes real skill and control over one’s body to flop and fall all over the ice without getting injured, and he was able to stumble his way through the show with impeccable comedic timing and control.

All the members of the company were stunning, with each act bringing something new and engaging. Throughout, there was a mix of circus, figure skating, and extreme skating with an integrated ensemble of skaters, acrobats, and aerialists. Much of the time, the ice and air elements were blended together, as was the case with many large ensemble numbers and an aerial straps duet between Crystal on figure skates, and the straps aerialist. But with a show on ice, one of the most exciting acts of the whole production was the extreme skaters. Dressed in brightly colored hockey gear, the extreme skaters came onstage with a burst of sound, light, and energy at the end of Act One. From the beginning, the excitement for their act was palpable and grew throughout the performance as they made a series of wild jumps and flips off of ramps positioned and shifting around the ice, accompanied by upbeat rock music. And through the series vignettes that made up the show, Crystal skated, stringing the acts together with her joyful, curious demeanor. The performer playing Crystal was on for almost the entire performance and her stamina both athletically and artistically to stay present in the moment throughout, was lovely to watch. 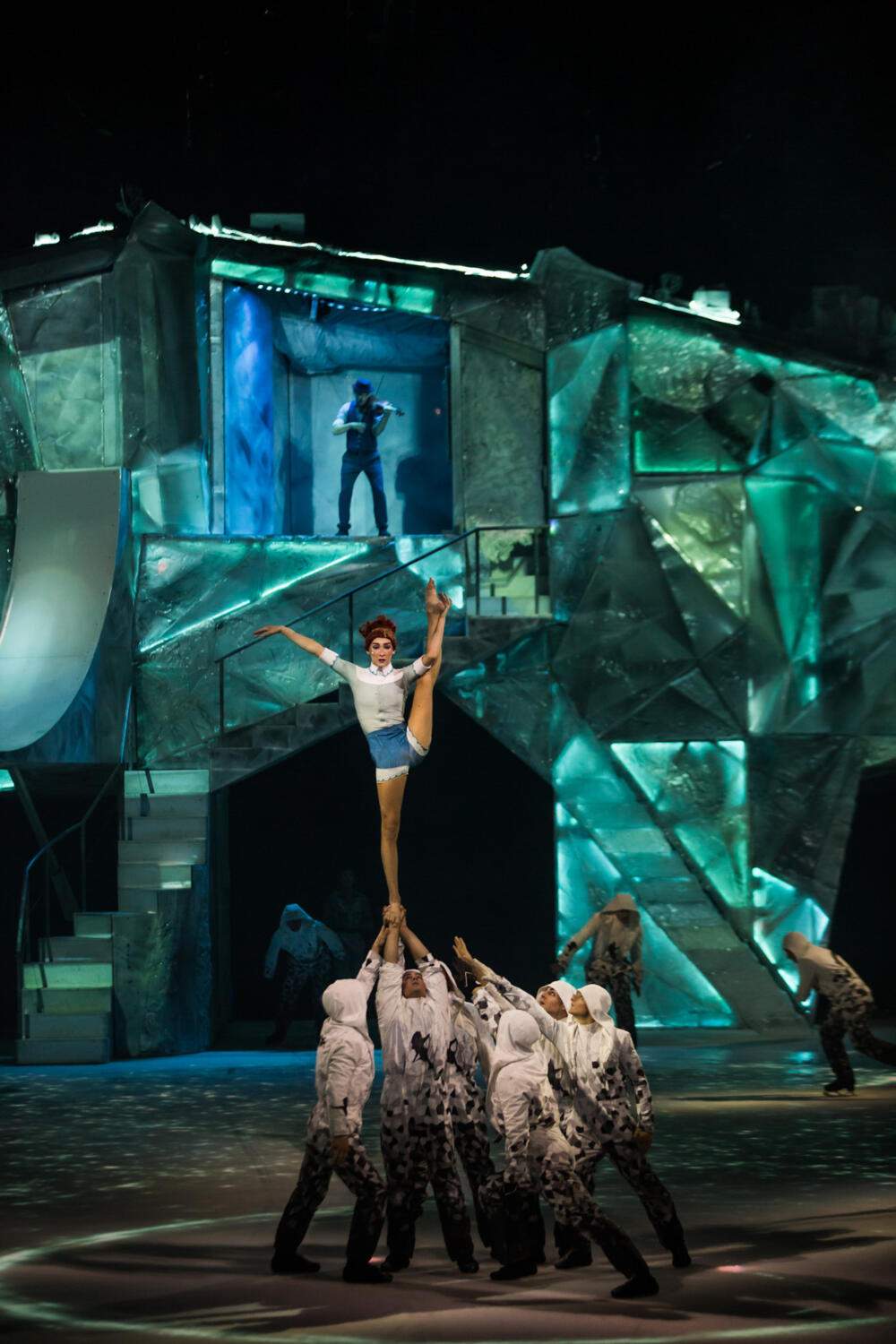 The show was also peppered with live musical performances with instrumentalists coming down to the ice to be a part of the act, and one number going so far as to have a massive grand piano being pushed around the ice rink as the pianist played. It was lovely to see the integration of the circus performers and the musicians together on-stage – it further promoted the ensemble feel of the piece and created an even greater sense of celebration. The music itself, composed by Maxim Lepage, fit each act beautifully, moving easily through different styles, from rock, to Klezmer, to waltz, and even to a corporate soundscape.

On top of the incredible performances, I found that the technical elements, particularly the lighting and sound design, took my breath away for the manner in which they were just as much a part of the choreography and storytelling as the circus, skating, and music. Lighting designer, Eric Champoux, used the ice rink as a blank canvas on which whole worlds could be projected. There were several moments in which the elements of the show were so beautifully integrated that I couldn’t help but say “wow” under my breath to my friend as we watched. One such moment was when Crystal gets the pen from her reflection, as she glides on the ice, ink markings begin to appear, following her path as if she was drawing with the skates themselves. Everywhere she went across the ice, the ink followed in lovely swirling patterns that aligned perfectly with the choreography. Another moment of beautiful coming together of the elements was at the end of the trick skating act. With so much happening in a jaw-dropping display of bravery and athleticism, Crystal moves to the center of the rink. A skater speeds towards the ramp just in front of her and as he leaps over her head, she arches back, the lights shift, and the bass drops and cuts out for the moment he’s suspended in the air over her head. The trick is simple – skater jumps over Crystal – but with all of the technical and circus elements combined, the trick becomes a moment, and I could hear the gasps across the audience.

I am a sucker for all things circus, but Cirque du Soleil’s CRYSTAL was one of the most spectacular circus shows I have ever seen. The integration of the circus artists, skaters, music, lights, and sound all made for a visually and auditorily stunning performance, that took my breath away again and again. The clowning, the death-defying tricks, and the artistry involved all make CRYSTAL a wonderful night out for the whole family.