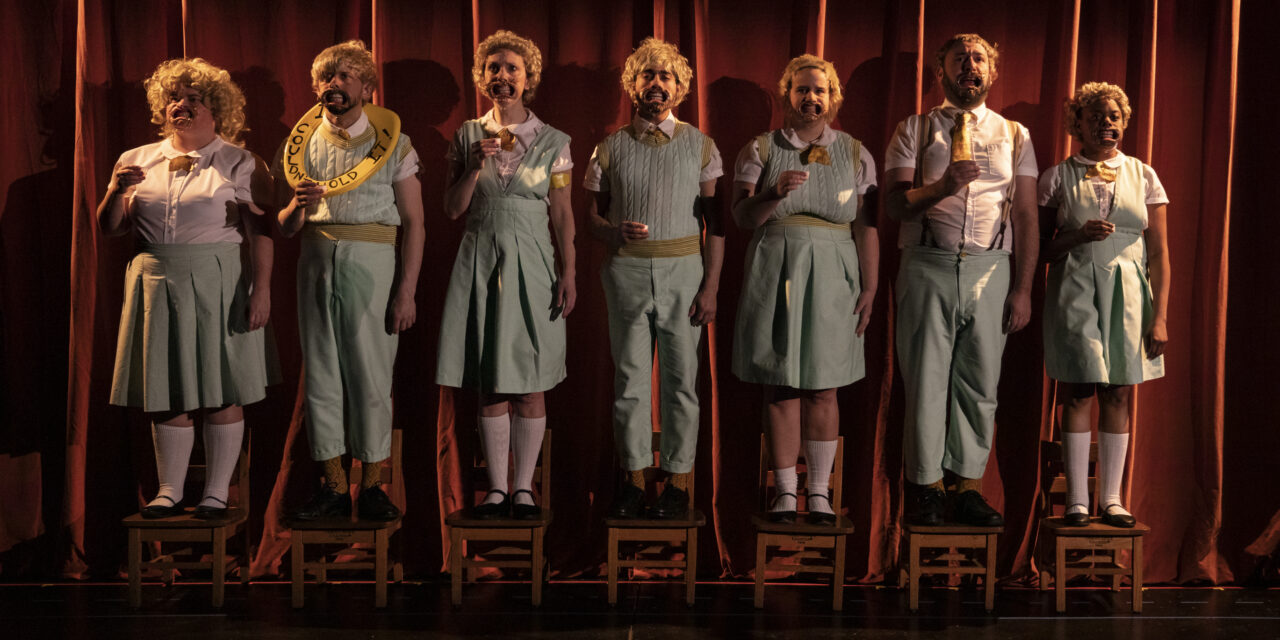 "Skinnamarink" at Next Door @ NYTW. Photo by Maria Baranova.

Skinnamarink is a deliriously diverting new production by Little Lord, a performance ensemble that springboards off often neglected texts to present their own whimsical brand of experimental theater. The production is part of Next Door at New York Theatre Workshop (NYTW), a program created by the venerated East Village theater whereby they provide space for visiting companies. In this case, it is the Fourth Street Theatre’s black box, adjacent to NYTW’s perch on East 4th Street.

Little Lord recently presented The Peanut Butter Show at Target Margin and counts trending The Brick and Bushwick Starr among its credits. Peanut butter figures prominently in Skinnamarink as a prop that each performer applies to their face early in the performance, a vivid example of the sort of iconoclasm the troupe embraces. Whether the sight and smell of the one-time lunchbox staple delights you is a good indicator of your appetite for Little Lord antics. An interesting commentary on the nut allergy panic sweeping through the educational system that might’ve been more effective later in the evening.

The performance begins as several actors in lime green, white, and pastel pink school uniforms sporting comically ill-fitting blonde wigs line up and begin to enact a series of absurd activities involving chairs, dunce caps, and balls. The text is based on a series of elementary school reading books called “McGuffey’s Eclectic Readers” which were ubiquitous texts in American schools in the mid-to-late 1800s. How much of the script is verbatim is not always clear yet Little Lord excels at creating a sense of menace beneath the seemingly benign surface of the wildly popular source material.

Satire is a challenging stance to sustain for an entire evening and there are moments where it’s unclear that Skinnamarink indeed has sufficient peanut butter in its jar to sustain a filling meal instead of a hearty snack. That said, the requirements of a full evening of theater necessitate more than an hour of playing time and Little Lord does a good job of maintaining their energetic momentum.

Michael Levinton is the director as well as Little Lord’s Artistic Director. He presents a tightly paced performance with much cheerleader-like precision. Whitney G-Bowley is the choreographer and movement is a highlight of the evening. Costume designer Karen Boyer creates lurid, amusingly unflattering uniforms for the game, dynamic cast. Lighting designer Cha See does well with a fairly low ceiling and set designer Marika Kent likewise manages the challenge of an in-the-round stage. Joseph Wolfslau’s sound is another highlight of the night, with various effects contributing notably to the overall irreverent antics of the show. The cast is a consistently committed ensemble.

The enduring takeaway of the evening is the absurdity and inherent danger of the largely conformist US educational system then and now. By emphasizing the regimentation of exercise in the militaristic movement of the show Levinton helps underscore the political implications of the performance. Given the show’s intentions, Skinnamarink succeeds at presenting a gleeful evening of experimental fun with more than a nod toward Theatre of the Absurd masters such as Ionesco. Given Little Lord’s notable skills it’d be interesting to see them tackle a text by a modern European master. 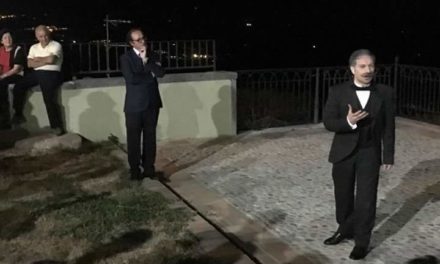 Francesco De Sanctis: From the Electoral Travel to the Stage