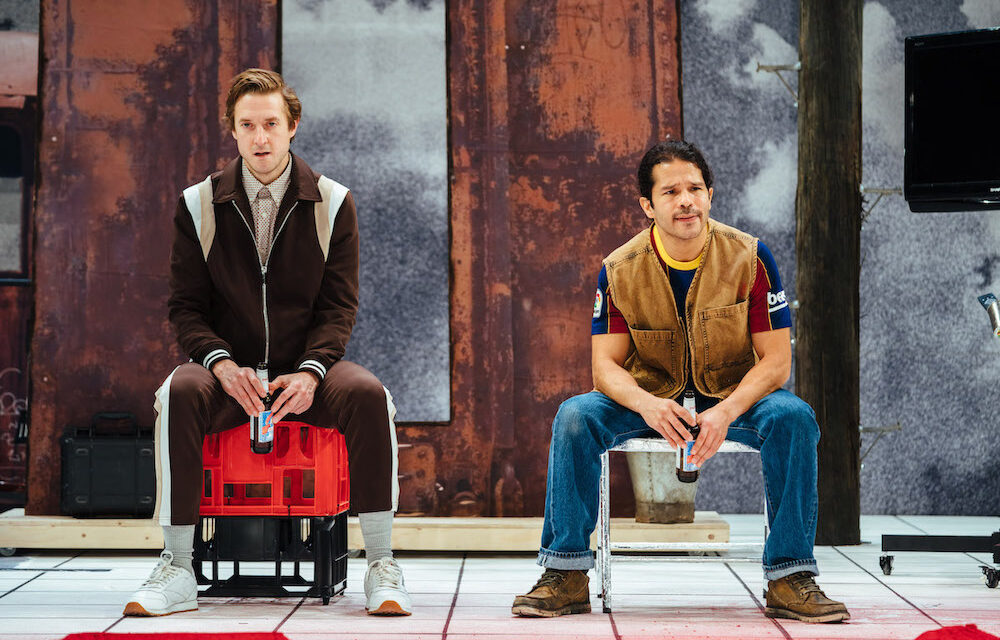 Why are we indifferent to anti-Semitism? In the past few weeks the Royal Court, a proud citadel of wokeness, has been embroiled in an appalling case of prejudice by allowing a character, who is a really bad money-grubbing billionaire in Al Smith’s new play Rare Earth Mettle, to be called Hershel Fink. Racial stereotype, or what? The really stupid thing about this row is not just that Smith created this nominal caricature of a money-obsessed Jew, but also that no one, repeat no one, in this theatre’s script reading process seems to have noticed. Proof, if that was needed, that as comedian and writer David Baddiel has so forcefully pointed out in the title of his seminal book — Jews Don’t Count.

After this bad start, and quite a jinxed series of previews, Rare Earth Mettle is even worse on stage than it was on the page. Set in the Bolivian desert, the story is about a battle between two strong-willed characters, the now renamed Henry Finn, maverick head of Edison Motors (played by ex-Doctor Who star Arthur Darvill), and Anna, an NHS director of research. Both want the rare earth metal lithium from the South American salt flats: the Silicon Valley billionaire businessman, who is a caricature if not in fact an anti-Semitic one, wants lithium for the batteries of his electric cars, while the English doctor wants to put it in the water supply to help the UK population’s mental health.

The indigenous community, who have lived on the land for generations, are mainly represented by Kimsa, a tourist guide who looks after a rusty steam train originally imported by the British and a symbol of decaying imperialism. His 12-year-old daughter, Alejandra, suffers from blood cancer, a legacy of the use of mercury in silver mining by the Spanish invaders of conquistador times. So the results of colonialism, and environmental degradation, are clear to see. In an effort to contest the further exploitation of the area’s natural resources by either Henry and Anna, a local politician, Nayra, is about to make a bid for the presidency of the country. But are her motives any more pure?

What happens next is not only unlikely, not just schematic, but rather distressingly cynical. None of the characters are more than cardboard cutouts and each moves in an amoral universe in which the main motivations are either profit or power — or both. Worse still, the play can’t decide whether it is a sharp satire, or a serious account of power politics. As a satire it is too sporadic; as an analysis it is too weak. If this is not bad enough, Smith’s storytelling is clunky and pedestrian. The plot only really gets going in scene seven, about 50 minutes into an evening that lasts more than three hours. And which feels like it.

Smith’s writing is disappointingly functional, often banal and uninteresting. The early use of the classic device of getting laughs from the fact that the Americans can’t speak Spanish properly soon becomes irritating, and the occasionally vivid phrase or bright image really can’t compensate for the large tracts of unexceptional, often unnecessary, plot complications. The main saving grace is that strong sense of the contemporary: set in the months of March and July 2020, the ominous presence of Trump and the pandemic is here, as well as a host of interesting ideas.

The context of American attempts to tackle the climate emergency, by using technology and exploiting the natural resources of poorer countries, is compared with the British desire to save the NHS by reducing the pressure of patients who suffer mental health problems. At the same time, the realities of political power play are shown in the maneuvering of the characters, and the use of contemporary marketing techniques, with their manipulative language and their designs on our feelings. In the satirical moments, there are many acute insights into subjects such as the growing resistance to antibiotics, the academic history of indigenous peoples, medical and business ethics and, my favorite, “compassionate engineering”.

The trouble is that most of this is lost in a dry desert of cumbersome plotting which, despite one thrilling scene near the end when Henry and Anna finally clash, is both preposterous and wearying. None of this is helped by Hamish Pirie’s directing; characters often speak directly to the audience and not to each other, lowering the dramatic temperature; the scene changes are burdened with irrelevant music and dance moves; and only a few of the jokes work. The colorful design, by Moi Tran, adds to the feeling that this is a cartoon strip — which lessens our engagement with the characters and their different plights —  and the opening image of a slow pendulum serves mainly as warning that this will be a long night.

And it is. Darvill plays Henry, who is a mixture of Elon Musk, Jeff Bezos, Steve Jobs and a touch of Bill Gates, with a boyish energy, but his ferocity never really convinces. Worse still, he is hard either to empathize with or to thoroughly despise. Genevieve O’Reilly as Anna has a cool dignity and air of competence, but it’s hard to believe in her character’s backstory. Of the other actors, two stand out. Firstly, Carlo Albán’s Kimsa who conveys both cunning and anger, and secondly, Jaye Griffiths’s Nayra who proves much cleverer than her exploiters. But, apart from some stimulating ideas, this is one long slog that never really engages the emotions. As others have pointed out, the controversy about the lead character’s name has generated more heat than the play itself.

Rare Earth Mettle is at the Royal Court until December 18th, 2021.

This article was originally published by Aleks Sierz on November 17th, 2021, and has been reposted with permission. To read the original article, click here.