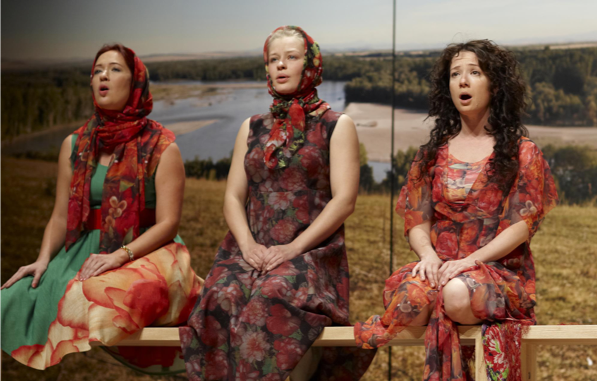 This month, Moscow’s Theatre of Nations graced the Barbican’s stage with Shukshin’s Stories, an exhilarating ensemble of eight tales by Vasily Shukshin (1929-74), directed by Alvis Hermanis and starring Evgeny Mironov. Shukshin’s short stories are based in his native village of Srostki, in the Altai region of Siberia. He depicts the deep inner worlds of his characters, celebrating their everyday pursuits, failings, yearnings, blunders, and compromises. Shukshin’s characters are tied to neither time nor place. They elicit our empathy with their nostalgic attachment to home, their compassion, and, of course, their foolishness. The production combines a backdrop of photographs of present-day Srostki with vibrant 1970s Moscow-style costumes, building bridges between the present, the Soviet past, village life, and the entirely different world of Moscow. As such, Shukshin’s Stories offers British audiences the chance to gain a fresh vision of the ever-elusive “Russian soul.” 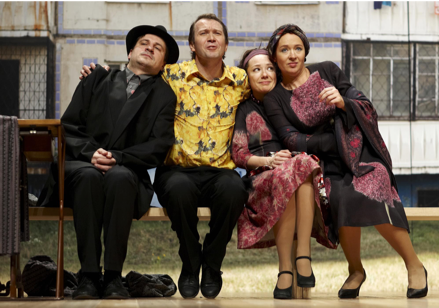 During the creative process, the theatre team visited the village of Srostki to get a feel for life there today, which certainly shone through in the actors’ renditions. Each of the eight tales is performed against its own specially curated backdrop of blown-up photographs, depicting contemporary villagers. The stage exudes the energy of the photographs’ original subjects: sunflowers, the staff at local shops and clinics, people young and old, homes, and a river. Each story ends with the characters in shadow, beautifully frozen in the culmination of action. The backdrop and set changes are masterfully executed, accompanied by music to create a wonderful flow and sense of anticipation as the next photographs slowly reveal themselves. The actors expertly commandeer the long bench which acts as the centerpiece of the stage, breathing new life into it as a bed, riverside, shop, clinic, living room, and courtyard. Conversational narration is combined with sublime dialogue, acting, singing, movement, and sound to create a truly enchanting spectacle.

The characters of the eight stories each have a certain obsession or longing that drives them to folly. We see one man spend an extortionate 65 roubles on a pair of glamorous, white leather boots for his wife, only to discover that they don’t fit her. Another man spends all the family’s savings on a microscope, telling his wife he was given it at work as a bonus. He sees himself as quite the scientist; he becomes terribly paranoid by what he perceives as an alarming epidemic of dangerous microbes. In another story, a man who once spent his Sundays in the village giving dance concerts in the courtyard is driven to misery and drunkenness in his new life as a Muscovite, where he dances madly into the night. He dreams of returning to the village, but cannot leave his wife and baby behind in Moscow; he then spirals out of control. An old lady and her blind husband spend their days on the streets: he sings songs that make passers-by cry and toss coins into a pot which the old lady stretches out strategically under their noses. 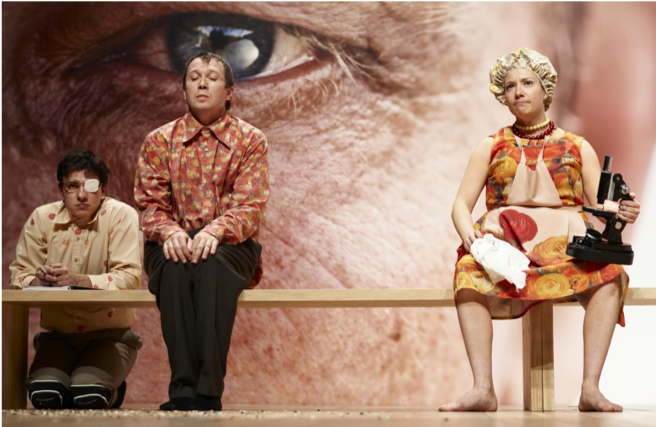 Shukshin’s stories shed light and gently self-mocking humor on the burdens of menial life. However, Shukshin certainly doesn’t shy away from the darker aspects of the human soul. The final story of the production is a fine example of this, both darkly humorous and melancholic at its core. Stepan, with just two weeks left of his prison sentence, escapes and returns home early, unannounced. His desperate yearning for home and family overrode any sense of rationality that would have seen him complete his sentence. His family quizzes him on how he was treated and whether he was fed well, to which he insists he had a great time going to the cinema twice a week. He is soon found by police knocking at the door, and his prison sentence is extended by two years. Most poignant of all is his disabled sister’s devastating outcry about her brother having to return to prison.

The Theatre of Nations’ Shukshin’s Stories is wise, accessible, and inspiring. It is about people who find joy, solace, love, and pain in their personal and family lives. It is about people who tolerate and live in the moment, rather than being consumed by politics or resistance. In other words, it is a universal and timeless production about human nature, resonating as much with modern audiences as with Soviet ones.

This article was originally posted at https://www.russianartandculture.com/ and has been reposted with permission. To read the original article, click here.