Lysistrata In The New World: A Rereading Of The Greek Comedy That Surpasses Its Source Of Inspiration 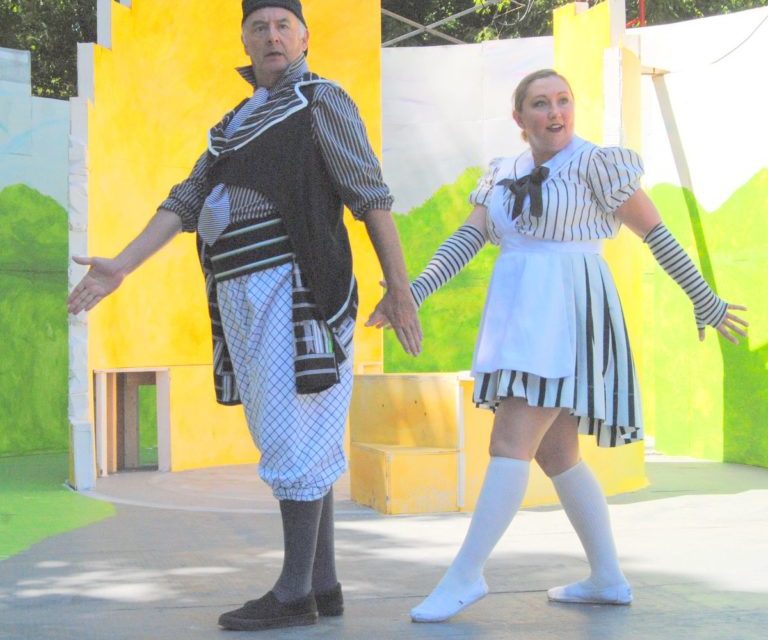 "Lysistrata And The Temple Of Gaia" or "Apocalyptus Interruptus" by David S. Craig. A production of the Odyssey Theatre in Strathcona Park. David Warburton and Catriona Leger. Photo By Barb Gray

Odyssey Theatre has at last been reborn under the stars in this Canadian premier. After a period of experimenting, of reflexion spent by Laurie Steven and her talented team of actors, set, and costume designers and writers, they have found a stage esthetic which has allowed them to make a smooth transition from the use of the Italian Commedia dell’arte that they so beautifully integrated from the start, towards a more flexible, more modern solution to their stylistic confusion of the last few years. This revised version of Lysistrata (created in 411 B.C.) was inspired by a work of theatre that preexisted the famous Italian popular theatre that had so much influence on European Theatre since its inception in the 16th Century. However, the Greek play was clearly attractive for the company because it was related to other masked traditions and that is where the team was able to make an effective move from the past to the present, under the perceptive eye of David S. Craig, award-winning author, director, lyricist, and choreographer. In fact, Lysistrata lent itself to a world marked by all sorts of masked theatre because of its Old Comedy origins in the tradition of the Greek Dionysiac Festivals. Here, the vulgar, the grotesque, the farce, the burlesque, singing, dancing, medieval Bakhtinian lower-body humor combined with masked players which were gross caricatures that integrated the chorus and filled the space with great plots and critiques of the terrible Peloponnesian Wars that were destroying both Athens and Sparta at that period.

A contemporary feminist Lysistrata emerged from this atmosphere and Craig, realized the great potential of his choice. His new work gave us an event that moves easily between various masked conventions and forms of performance some of which the company already knew. Thus the playwright has us slip from one period to another, by cutting scenes, by changing characters, by bringing in the audience, by changing the very function of the mask, by revising the marital situations of the main Athenian women and taking us along at a quick clip from one moment to the next as Lysistrata, becomes involved in a new contemporary world mission. Her idea was not to put an end to war, but to save the world from the horrendous pollution that is destroying the air, polluting the sea and choking every living thing to death. To complicate the situation, the character, Lysistrata played with enormous dignity and much queenly presence by Shelley Simiester who dominates this whole stage world, realizes that if her husband were a father, he would then be interested in the future of the planet but since she is barren she cannot have children. Thus, Lysistrata has called up the Goddess of Fertility/Earth, Gaia, during an impressive ceremony that included singing, chanting, dancing by the three outstanding women in the group hoping the Goddess will appear and help Lysistrata have her baby.

The moment of Gaia’s appearance shows us the importance of the traditional Greek masks, striking objects that appear to be living creatures, created by Jerrard Smith. He has transformed the site of her temple into a place of magic where the past and the future meet as the terrifying Gaia floats into the theatre, roaring with cruel laughter and threatening the whole human race with extinction if the women cannot find five individuals who will accept the will of the Goddess to cease destroying nature by wiping out patriarchy in the world.

Also exciting are the meetings between the couples: Lysistrata and husband Cleon, a war hero and a tough adversary played by the excellent Martin Julien whose love for his wife is very deep but later revelations change completely our understanding of this man who wants nothing more than to become a real tyrant of Greece (we are in the middle of contemporary politics here!) as well as the leader of the Athenian army. The other disciples of Lysistrata, Cassandra (Sarah Finn) and Pandora (Natalia Gracious) have names suggesting other autonomous and powerful Greek deities in the world of Aristophanes who declare their own desire to be free in this new world.

All the characters wear a form of contemporary mask which has a medical function, a tube inserted into the nose to allow them all to survive in the foul air they are all breathing. Also indicative of the period is the link between the opposite sexes where “consent” must always be given before any kind of close physical contact is allowed. The world of the future has new rules but still, the human beings are closely linked to rituals of the past such as great celebrations of joy.

As the women heat up their search for five individuals who will sign the paper to support the vows of Gaia, they receive a visit from the Caliphate of the Levant, a new society that has emerged from the past war with Isis. The representative of the Caliph offers Cleon two beautiful “masked” princesses who come to visit the house of the Military hero, to participate with him in the construction of a “breathing bridge between Greece and the Middle Eastern Society since his barren Lysistrata is not able to have children.

One revelation after the other drives the plot forward, each one plays out with more wit and textual charm with underlying depth than the preceding, creating a delightful text full of fascinating exchanges. In fact, Craig’s script follows the logic of its Greek predecessor in a most astute way, giving us the feeling that everything that unfolds here in the 21st century follows in the footsteps of Aristophanes.

Among the most interesting performances that added much sophistication to the play, were the slave duo made up of the nameless H (Catriona Leger) and the nameless G (David Warburton), nameless as true Greek slaves had to remain. These two voices making up the contemporary Greek chorus with their own saucy narrative, their own style of franc-parler which suggested the prerevolutionary servants of Molière’s theatre, were especially noteworthy for their articulation, their spoken word , their singing, their own personal choreography, and their impeccable comic rhythms that flowed like clockwork all through the show.

As much as Jerrard Smith’s great god-like masks terrified and startled us by their forceful presence and captivating images of these creatures from another world, his background panels that suggested the portions of the dwellings outside the Columns of the Temple of Gaia, were rather bland and uninteresting. I wondered why those walls dotted with wilting red flowers, would not show the crumbling of local architecture, the cracks in the structures and the studied ugliness of a civilization at the point of destruction. That portion of the set missed the point but the rest was so excellent that this bit became a small detail in a whole sea of wonderment we were able to appreciate during two and a half hours of pure fantasy.

Lysistrata And The Temple Of Gaia or Apocalyptus Interruptus is a treat not to be missed. It plays in Strathcona park until August 26. http://capitalcriticscircle.com/odyssey-theatre-st-lawrence-shakespeare-festival-new-summmer-416-play-pass/

This article first appeared in Capital Critics’ Circle on August 2, 2018, and has been reposted with permission.