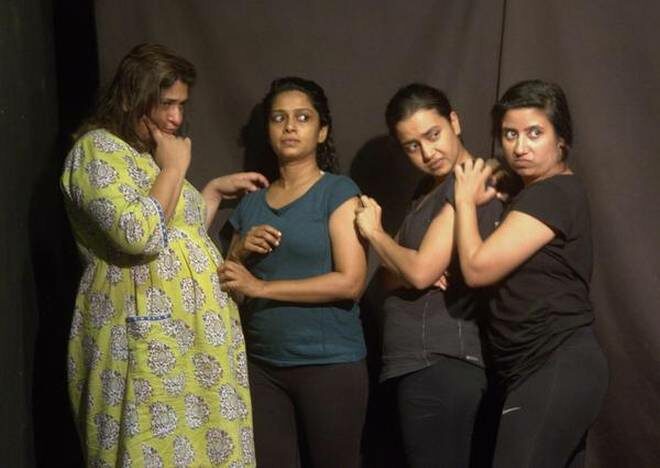 Breaking the predominantly black and white color scheme on their Instagram account is the poster by Valeriya Polyanychko of the Patchwork Ensemble’s new play, Shikaar.

Forbidding shades of green, a gnarled old oak with eyes on its bark, a sullen black cat perched on a skull, and the play’s title dripping blood in a scary-movie font, might evoke mostly dread and fear if it weren’t for its centerpiece- a tattooed tree-spirit on a branch. With soothing Eau de Nil skin and an impish look, the figure conjures up memories of the group’s previous outings like Ila and The Gentlemen’s Club, full of mirth and delight, while not lacking the gravitas and rigor their actors bring to the themes they take on headlong.

Shikaar is a collaborative project which features a host of interesting performers, including Patchwork’s regulars- Rachel D’Souza, Shruti Vyas and co-founders Sheena Khalid and Puja Sarup.

This new production, whose story and the concept is the brainchild of novelist Schubangi Swarup, deals with female supernatural beings called chudails. Although the word has a particular South Asian (and Persian) etymology, Shikaar doesn’t attempt to negotiate existing social contexts like the demolishing of lower caste women in an Indian outback where witch-hunting might still be prevalent.

“Those are not our stories to tell. We’ve been very careful that we are not seen as appropriating a backdrop that doesn’t belong to us,” clarifies Khalid. In folklore, women who have died of unfulfilled desires, or have experienced traumatic deaths, become chudails. Shikaar’s breed is born into their own lineage and are perfectly self-sufficient, hunting down men simply because they must, and not to wreak vengeance for past grudges.

It is hard not to miss a subliminal attempt at reclaiming a word that still carries a considerable stigma.

Patchwork’s association with Swarup dates back to a 2015 event she organized at Dadar’s Sitara Studio in honor of slain Pakistani human rights activist Sabeen Mahmud. A short sojourn in Goa in June by the collaborators yielded ideas aplenty but nothing that could be taken forward. “We wanted to look at the insidious creature of instigation, especially on social media, where something can spark off and acquire a life of its own,” says Khalid. A fun event was organized- an evening of party games at Khalid’s home- where guests diligently played Werewolf, a game in which discreet manipulations are par for the course, while Swarup took notes. Merging these strands together resulted in a story in which a commune of chudails takes center stage. On the surface, they interact with the outside world in ordinary ways, holding down jobs and associations, but once a month, they need to hunt down a virile man and consume his flesh, to cling on to their powers.

A visit from a government inspector (Saurabh Nayyar), tasked with weeding out chudails in the vicinity, throws their world, with its unorthodox morality, into an upheaval that will likely feed the play many moments of sheer levity.

Apart from the aforementioned, workshops for the play brought in some talented actors into the mix including Reshma Shetty and Neha Singh, who have often been part of large rambunctious ensembles in the past (for instance, One Night Only and Ishq Aaha, respectively). Nayyar and Dheer Hira (upcoming actor and the group’s steadfast stage manager) are the only men in the estrogen-heavy enterprise (and its privilege to savor). As is often the case with Patchwork’s productions, much of what will be seen on stage will be devised by actors themselves on the rehearsal floors.

Collective energies and sensibilities coalesce into what invariably ends up as a live adventure onstage for its players. The process for Shikaar has not been without its setbacks, but ultimately the team has powered through to their opening run of five shows in just a few weeks of rehearsals.

This article was reposted with permission from The Hindu. It was originally published on August 14th, 2019.