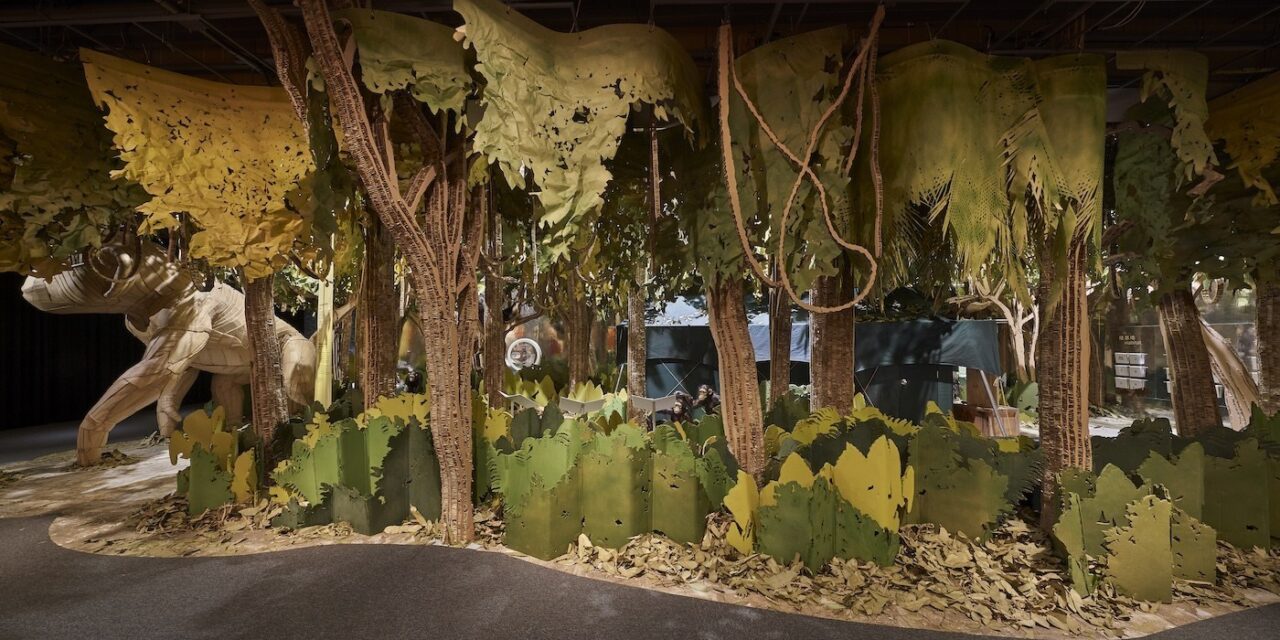 A rainforest has risen on the ground level of the Hong Kong Science Museum. Leaves rustle underfoot, stag beetles meander on the tree branches and exotic moths with wings a vivid shade of pea green blend into the foliage. And all of it is made of paper.

The forest fans out around a tent serving as workstation based on the one in the Gombe Stream Reserve in Tanzania, where Jane Goodall began studying chimpanzees 59 years ago – a lifetime of work that has redefined the relationship between humans and their primate cousins.

Now that work is on display in Becoming Jane: Inspiring a Shared Planet, an exhibition that documents Goodall’s efforts to save the natural world from destruction by exploring how the fates of people, forests and chimpanzees are intertwined. Organized in partnership with the Jane Goodall Institute, which takes a community-based approach to conservation, the exhibition is a showcase for how nature education can be done aesthetically and sustainably.

In the paper forest, trees stand a bit over four meters high, draped in hanging vines, shrubs, falling leaves, birds, insects and animals from lizards to tree toads to snakes. It hums with activity and the sound of children. “Seeing children running around the paper forest, exploring and discovering paper animals hidden in the trees and shrubs, walking or crawling on rocks and shrubs is the most satisfying aspect for me and the team at Jane Goodall Institute,” says Willy Kwong, executive director of the institute’s Hong Kong branch. “We believe the best way to raise children’s interest in conservation is through a combination of education and entertainment.” 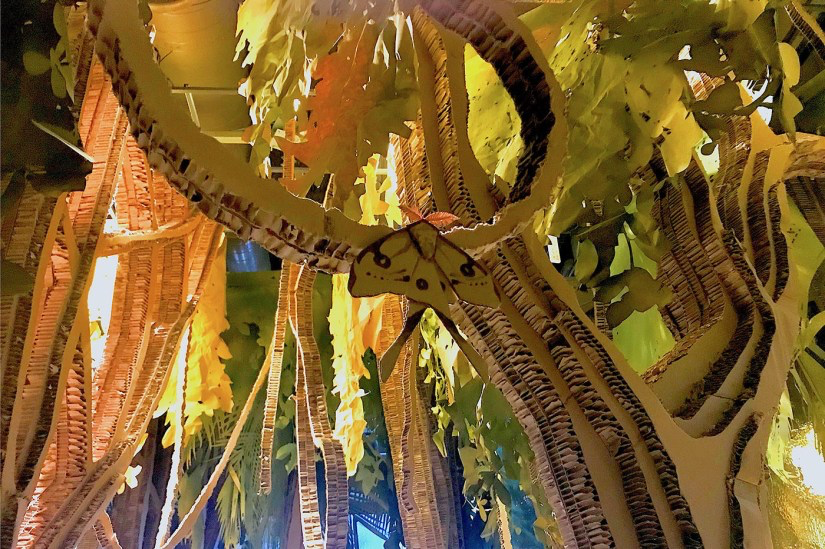 The exhibition came into being after Goodall visited Hong Kong last November for screenings of Jane, a documentary on her life and work. Over a series of meetings in four short days, she entertained a dialogue about the need for more focus on conservation in Hong Kong, which generates a disproportionate amount of waste compared to other cities – and is home to many large companies that enable environmental destruction abroad. 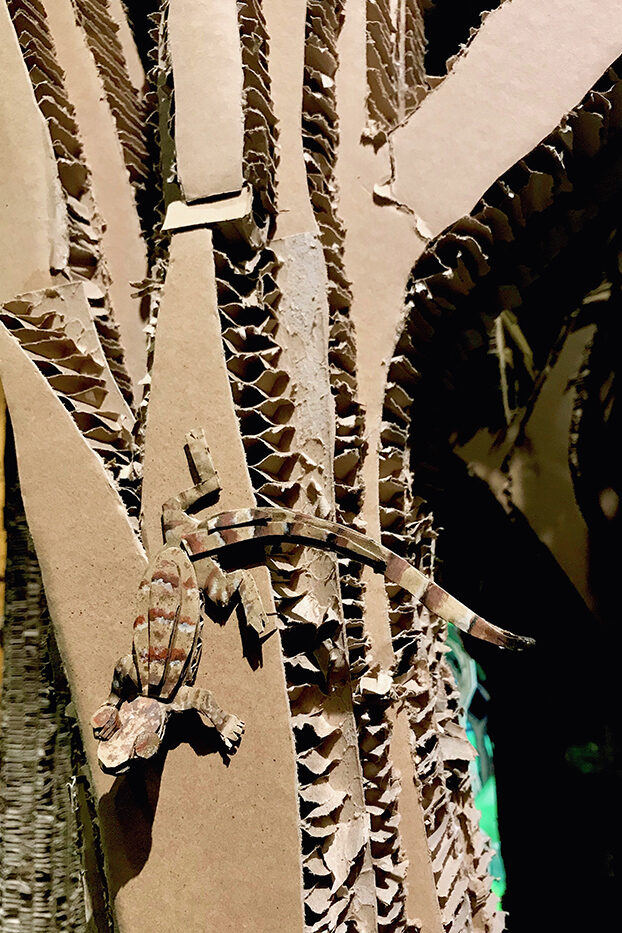 At the age of 85, Goodall is as much in the vanguard as ever, working as an advocate for education, community organization, green finance, and green energy. And despite the world’s seemingly intractable problems, she remains an optimist. “One of the things that give me the most hope is the human brain,” she told journalist Rhett Butler just after her birthday in April. “We are just beginning to use our brains for good.”

Goodall travels 300 days a year for the institute, which she founded in 1977. Its Hong Kong chapter opened nearly a decade ago and has developed programs like Roots and Shoots, which encourages individuals to find their own ways to protect the planet. Throughout her career, Goodall has held steadfast to the idea that each person can make a difference.

After the seed for the exhibition was planted in November, the Hong Kong chapter of the institute secured funding from the Hong Kong Jockey Club Charities Trust and tapped local design firm Globe Creative to create an immersive museum experience. A diverse team of 50 people came up with the design; that team, including content developers, animators, illustrators, paper artists, and sound designers is as cosmopolitan as Hong Kong itself.

But paper was not originally in the plan. When designer Sjoerd Hoestra and his team first set out to build a prototype for the exhibition, they thought the trees would have to be made of plastic, to ensure durability and so that the forest could be packed for travel to other exhibition venues. But plastic seemed at odds with the Jane Goodall Institute’s focus on wildlife, environmental conservation and community-centered efforts to bring about positive change. Paper seemed more appropriate. “I am always making something from paper,” says Hoestra. “It’s really about understanding its limitations and the aesthetic of the material.”

He began by making a 1:100 scale model of a forest out of cardboard, which stood four centimeters high. To convince the clients of the beauty in using paper, Hoestra quickly shaped trees by hand, with a cutting knife. He layered the cardboard to form the tree trunks. In just over an hour, they filled a corner of the room with a three-square-meter patch of forest. It was visually rich and textured, dense with information: the makings of a jungle. 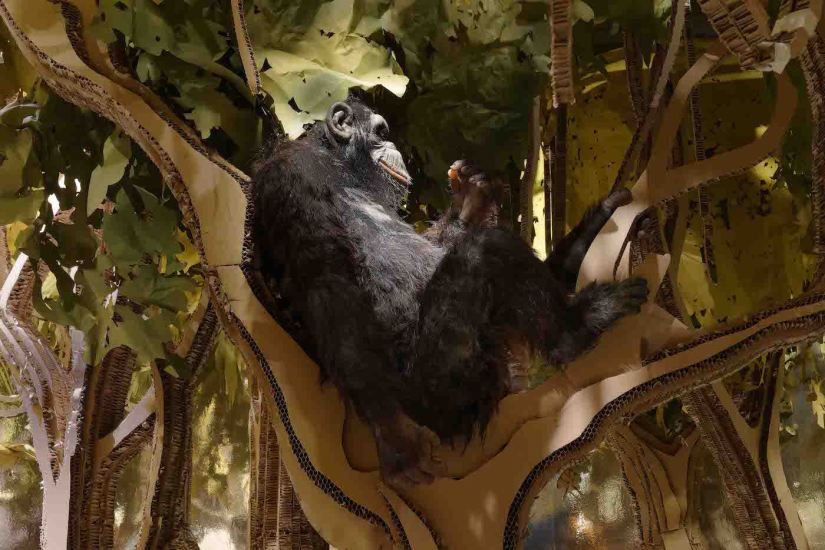 That model was scaled up into the forest that exists today: 1,400 pieces of honeycomb cardboard, 600 pieces of thick triple-corrugated cardboard and one tonne of Kraft paper. Computer numerical control (CNC) cutters were used to shape the cardboard into 40 trees with a total of 30,000 leaves. The fabricators came up with four generic tree forms, which was enough variation is needed to give an impression of nature, notes Hoestra.

Paper adds to the experience of immersion. The cardboard resembles tree bark, with cuts that reveal the innards of the corrugated board, making a rough, jagged surface that looks surprisingly natural. It is tactile and it degrades and breaks down where visitors rub against it, much as trees and other plants do in reality. The paper animals seem poised to move, helped by an aural landscape of wind, rustling leaves and chimp calls, which are fed in through 24 speakers, creating a constantly changing forest soundscape.

A baby chimp named Golden meets the gaze of visitors as they enter the paper forest, staring at them with an expression that is at once innocent and bold. He stands three meters high, fabricated out of triple-corrugated cardboard. A team of four artists and structural engineers spent nearly three weeks to cut 120 sheets into individual pieces to sculpt the lifelike figure of the baby chimp, aided in the process by a primatologist who ensured Golden is anatomically correct. 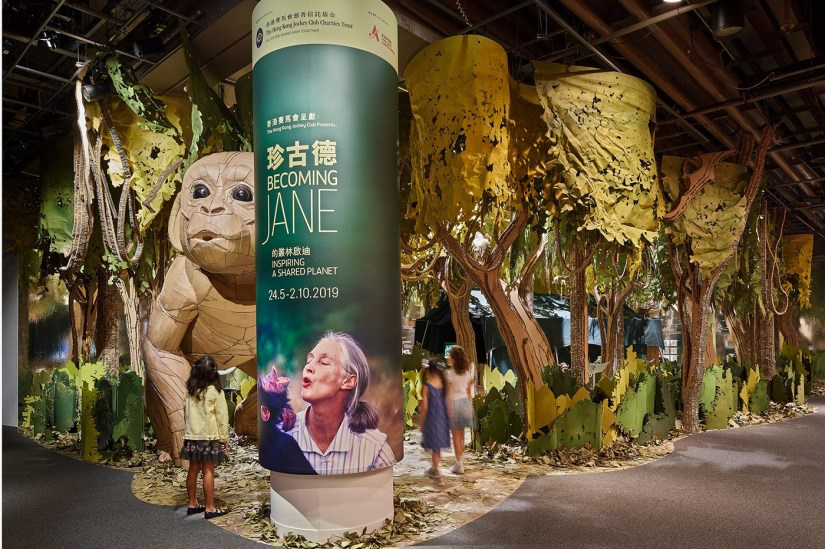 The same team also fashioned invertebrates, birds and other animals out of paper. Led by Taiwanese artist Zhong Kai-Xiang, their goal was to make them appear on the verge of motion, like a lizard that seems ready to swing its tail. A snake hidden in the corner is coiled to strike. Some of the hawks, high in the trees, seem to have just fallen still, resting in the branches. Another hawk is in flight. Moths, tree toads, and other paper-fashioned invertebrates inch along the tree trunks, where they fade into the dappled pattern of leaves and their shadows in the paper forest. As Karen Chang, founding partner in Globe Creative explained, the forest setting and chances to interact with multimedia installations, docents and lifesize chimpanzees reinforce the message of conservation.

The result is a forest that feels entirely natural, but its footprint in the museum is shaped like a cumulus cloud on the institution’s ground floor as if to underscore that this Gombe Forest is a reproduction and an illusion. Once visitors step over the cloud’s edge, they tend to linger. This was one of the aims of the creatives behind the exhibition: for visitors to dwell for a time. The space of the paper forest enables young people to try their hands at being a ranger, or an observer of wildlife. Or they may come up with a project for the earth that is all their own.

This article was written by Kathy Lowry for Zolima City Mag on August 21, 2019, and has been republished with permission. 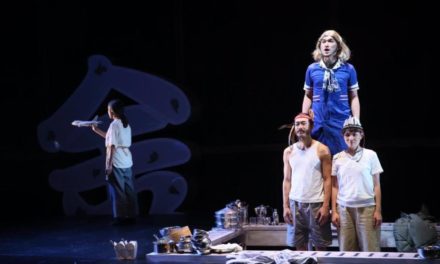 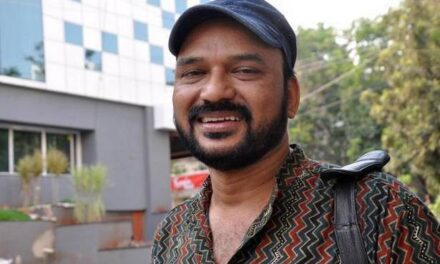