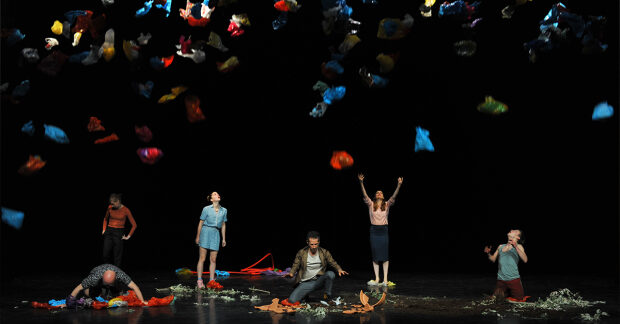 Are we not drawn onward to new erA. Photo: Mirjam Devriendt

It should be not at all surprising that climate change was one of the hot topics of this year’s Edinburgh Festival Fringe. Whether authors wove the theme into their plays or solo performers elaborated on it at length, the variety of the ways in which ecological crisis made it to the stage was striking. Moreover, the stylistic features of these works were often in direct correspondence with what the artists were attempting to convey.

Perhaps the most shattering example of such formal ingenuity is to be found in the Belgian company Ontroerend Goed’s palindromic Are we not drawn onward to new erA (ZOO Venues). A painfully beautiful exposé of ecological irreversibility, this brilliantly perplexing piece consists of two mirrored sections: At first, a group of performers inundates an originally bare stage with plastic bags, smoky gases, and the golden statue of a man, all of which follow upon their savage destruction of an apple tree. Then a screen comes down, and we watch the entirety of what has happened as it is played backward. Smoke is sucked back; bags fly up into the air; the tree gets reassembled. Whatever the performers were saying before now makes sense, as it turns out to have been in English, but read in reverse.

The enchanting but heartbreaking implausibility of this second half reveals a deep yearning to make things right while nodding at how devastatingly impossible it all is. The central change in medium, from performance to film, is a thoughtful move that underlines the discordance between this fantasy of full recovery and the simple rules of nature. By the end, when the projection shows a lone tree, but behind the translucent screen remains the whole mess, one cannot help but feel profound grief.

This sense of loss is also prominent in Sea Sick (CanadaHub), a solo performance by the Canadian journalist Alanna Mitchell on how the oceans have become warm, breathless, and sour. Mitchell’s Ted Talk-like presentation has the gravity of a crushing revelation, but because she elegantly embeds her personal narrative into her eloquent account of marine life, the experience of watching her is consistently refreshing. What she delivers is a wake-up call that is not loud in its volume, but has the right tune to induce alertness. “Science gives us knowledge,” she claims early in the performance, “art gives us meaning.” And Mitchell gives us both.

In Pathetic Fallacy (CanadaHub), Anita Rochon attempts to take her environmental message up a notch by removing herself from the performance space, so as not to increase her carbon footprint with a flight to Edinburgh. Instead, an unwitting but pre-arranged member of the audience stands in front of a hyperactive green screen and follows the instructions provided by Roch. While this set-up sounds promising, its execution—and particularly the content that accompanies it—proves hollow. Barring a few passing references to climate change, it is not clear what the piece wants to achieve: Roch’s voice-overs are chiefly about the ways in which humans’ relationship to weather has always been anthropocentric, but her quirky observations do not add up to a meaningful whole. Only at the end, when the clever use of a green cloak suggests that our absence from nature could be a corrective to ecological damage, does Pathetic Fallacy make meaningful use of its medium.

Tallulah Brown’s play When the Birds Come (Underbelly) borrows from recent environmental phenomena to create the backdrop for a story of two siblings living in the Alaskan tundra. As the ice melts and the rivers rise, the siblings grow aware that they must leave home and start a new life in Anchorage, whatever the cost may be. Though the play is admirable in its revamping of a family drama with the rarely staged issues of forced relocation and Alaskan indigeneity, its clunky dialogue and implausible plotting prevent it from delivering its full effect. Remarkable scenic elements (shiny plates of glass as pools of water) and dynamic lighting make this a pleasing production to behold, but more thought could have gone into characterization and pacing. Yet despite its weak spots, When the Birds Come points to a simple but significant fact—that it is increasingly harder to imagine contemporary narratives without regard for how, and why, ecological disasters impinge on them.