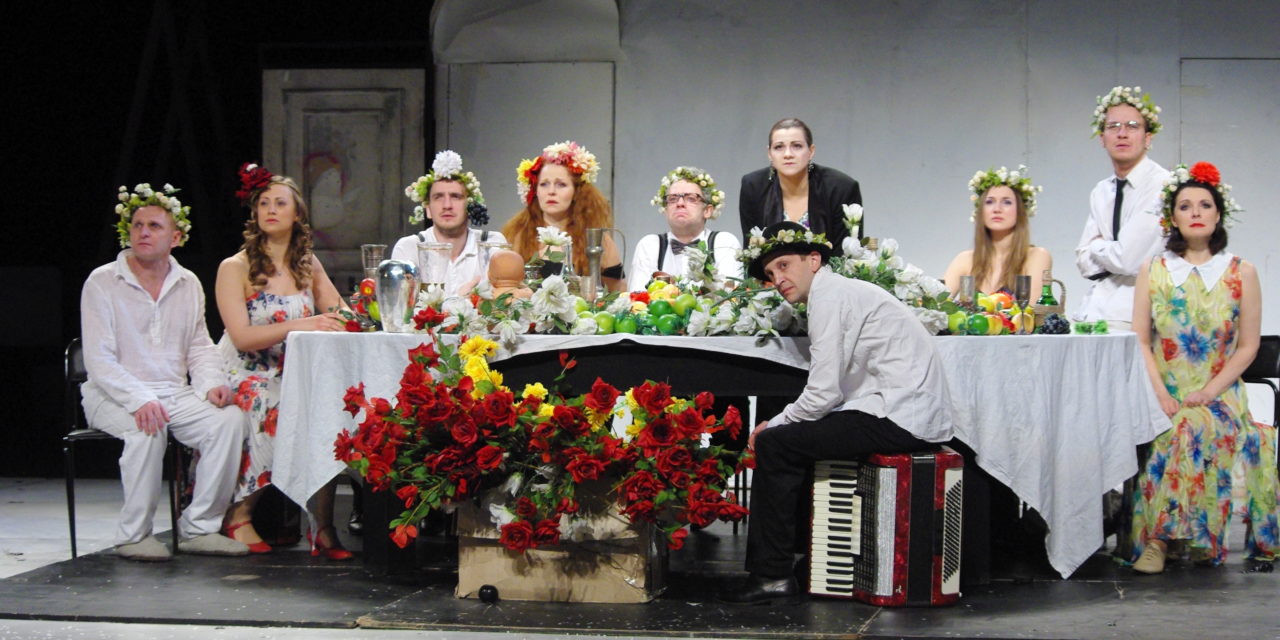 Yury Butusov’s The Seagull is an exuberant feast of a theatrical performance. In the nearly four-hour long filmed staging, the actors seemingly never stop moving: they dance, toss objects across the stage, swing from ropes hanging from the ceiling, scream, gyrate, crawl on the ground. The stage is an electric whirlwind of energy: abrasive, frenetic, chaotic, enticing. As the first production of the second season of the cinematic series Stage Russia HD, this play was filmed on the stage of Moscow’s Satirikon Theatre so that it could be brought to audiences in the West (this season includes screenings in the US, the UK, Ireland, and Canada). If The Seagull is any indicator of what is to come, we are in for a wild ride this season. 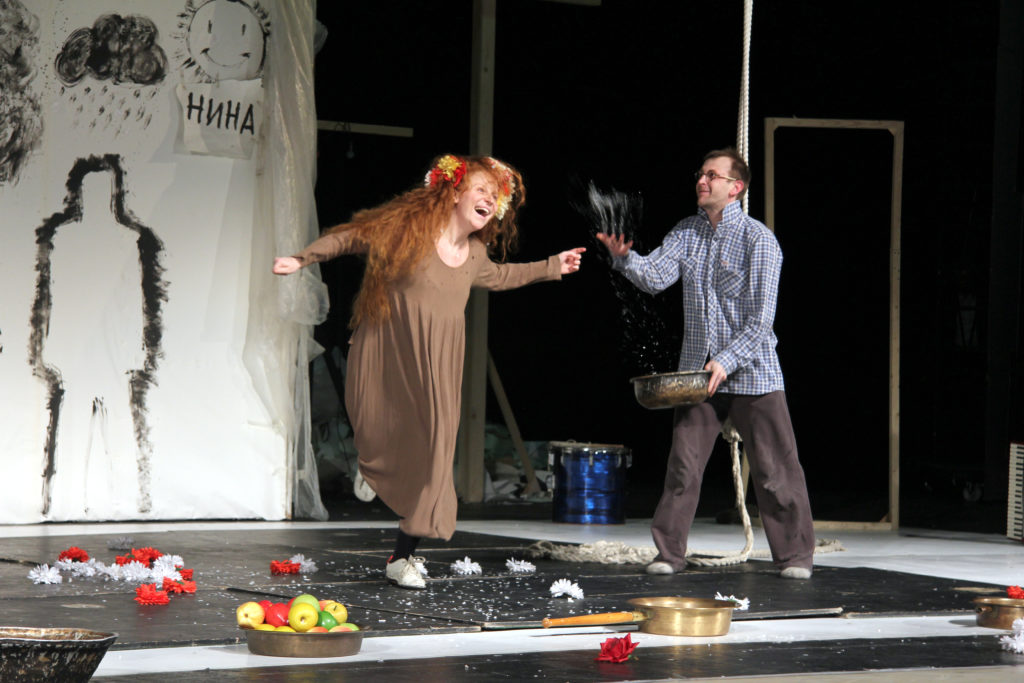 Butusov – whose work will also be featured in March when Stage Russia HD premieres its screening of Macbeth.Kino from Saint Petersburg’s Lensoviet Theatre – is one of the foremost directors on the contemporary Russian stage and a favorite of younger generations of Russian theatergoers. His theatrical work is known for its ceaseless energy, its cycles of repetition and doubling, and its eclecticism in tone. The Seagull is Butusov at his best. Calling to mind everything from a rock concert to vaudeville, the production is transcendent, striking in its layers of visual and aural imagery, as the music and the actors and even the objects tossed through the air unite to tell (and retell) Chekhov’s story of artistic and romantic collisions. Butusov himself appears onstage several times, joining in the dancing and bursting through the paper backdrop to deliver Treplev’s final monologue, shouting his lines into a handheld stand microphone like an impassioned rock singer.

Butusov and the cast of The Seagull revel in the text of Chekhov’s famous play like children in a playground. All linearity is stripped from the text as scenes are rearranged, elongated, omitted, or repeated. The performance opens not as does Chekhov’s play with Masha’s declaration that she is in mourning for her life—although that will come a few moments later—but with Treplev’s first monologue and his fervent call for new forms in the theatre. Actor Timofey Tribuntcev screams this line, seemingly aiming it squarely at the audience, the camera. Butusov suggests that this sentiment has never been truer than it is today, and he meets this challenge with a vivacious theatre of excess. 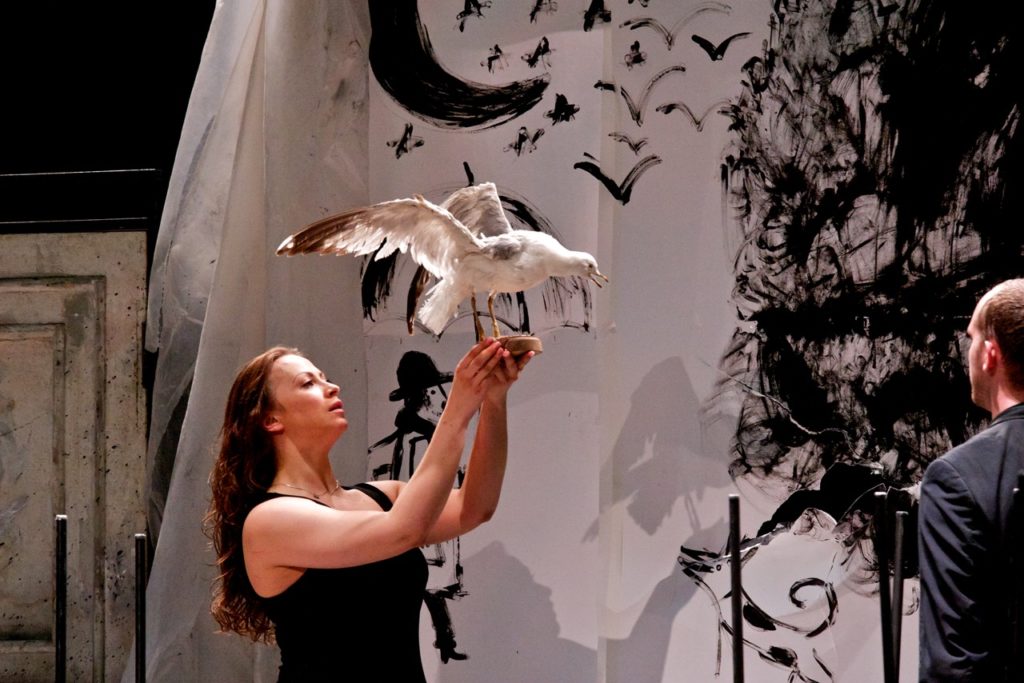 In bringing The Seagull to the screen, Stage Russia HD had the special challenge of conveying Butusov’s infectious energy and swirling stage images to a remote audience. As Eddie Aronoff, creator and producer of Stage Russia HD, explains, this was accomplished through the use of six cameras—variously positioned in the house and on the stage—and close collaboration with Butusov: “We involved Yury early in the process. He decided what moments he wanted us to focus on and even made the cast and crew available for 3 hours prior to the performance to run through a few scenes, which were filmed from the stage to create the potency that Yury felt was necessary. We wove those into the final edit and they add, I think, an undeniable amount of energy. We’re working together again on his Macbeth.Kino for a March release and will employ the same strategy.”

A second challenge in bringing The Seagull to Western audiences was the exorbitant length of the play, which runs nearly five hours when it is performed at the Satirikon. Aronoff explains: “We seriously considered editing it down, and Yury was game, but in the end, there was really no way to do it without compromising the epic nature of the piece. It’s about 4 hours 40 minutes for the live performance at the Satirikon, but that includes 3 twenty-five minute intermissions. We opted for [a single] fifteen-minute one, which allowed us to shave off about an hour.” 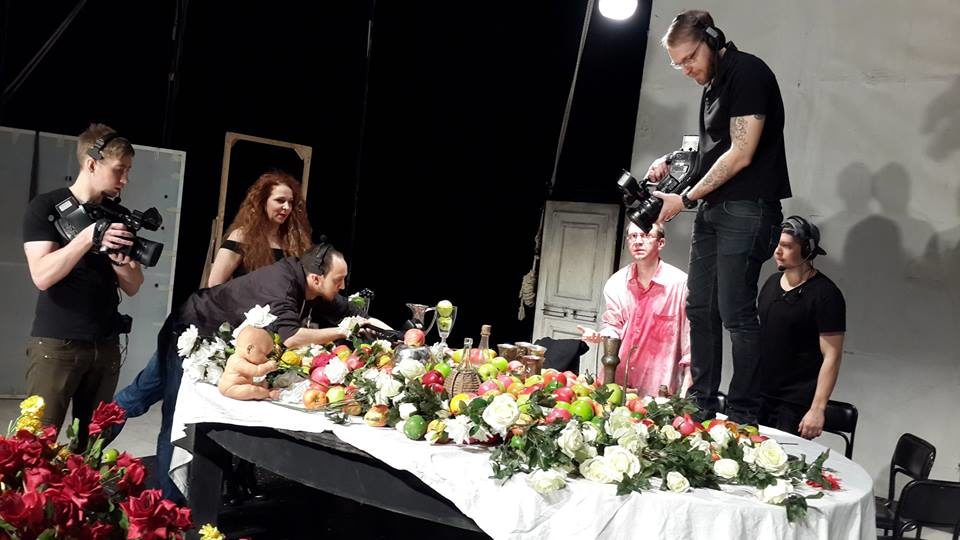 What comes next for Stage Russia HD? Aronoff speaks enthusiastically about series’ reception and its future, promising upcoming productions that continue to bring the best of the Russian stage to Western audiences. In its first season, Stage Russia HD premiered four productions from Moscow theatres: the Vakhtangov Theatre’s Eugene Onegin and Anna Karenina, the Moscow Art Theatre’s The Cherry Orchard, and the Young Generation Theatre’s The Black Monk. Per Aronoff, feedback to this inaugural season was “almost unanimously positive, which is heartening when you’re doing something as niche as this. It’s a long, arduous journey getting Western audiences to come out and see what amounts to a three and a half hour foreign film with absolutely no recognizable stars, but slowly but surely we’re making progress. Once they come once, they’re hooked.”

The second season is expanded in number, geography, and chosen plays (including a wholly contemporary work in addition to adaptations and stagings of classic texts). This season includes four Moscow productions—The Seagull, the Theatre Art Studio’s The Suicide, the Vakhtangov Theatre’s Uncle Vanya, and the Stanislavsky ElectroTheatre’s Drillalians—as well as one St. Petersburg production—the Lensoviet Theatre’s Macbeth.Kino. Aronoff explains the season selection: “We continue to be director-driven, choosing pieces that we like first and foremost, but with an eye towards exposing artists who we felt needed to be seen. It wasn’t totally a conscious decision, but we did want to reach out to a younger demographic. Theater here in Moscow is going through a kind of renaissance, particularly with the under 30 crowd. Directors like Butusov, Serebrennikov and Krymov, for example, are revered here by that younger demographic. The idea of exporting that energy to the West was interesting for us.”

Looking ahead, Aronoff suggests future seasons that build on the series’ strengths of presenting stunning, sweeping productions from the contemporary Russian stage while also continuing to expand to new directors and audiences: “Even before the trumped-up charges, we wanted to work with Serebrennikov. We’re also talking with the Fomenko regarding a few titles. Krymov, Bogomolov and Nekrošius, are on our short list. Dodin, of course, too. Ideally, we want to mix classic with modern. Our core audience is older and we want to make sure we cater to their desires as well.”

The Seagull premiered in cinemas in September and continues with screenings through October and beyond. See this page for dates and locations. Stage Russia HD’s next production, the Theatre Art Studio’s The Suicide, premieres in cinemas on November 9. 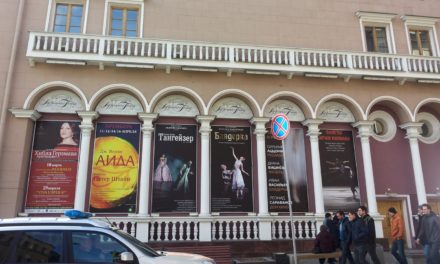