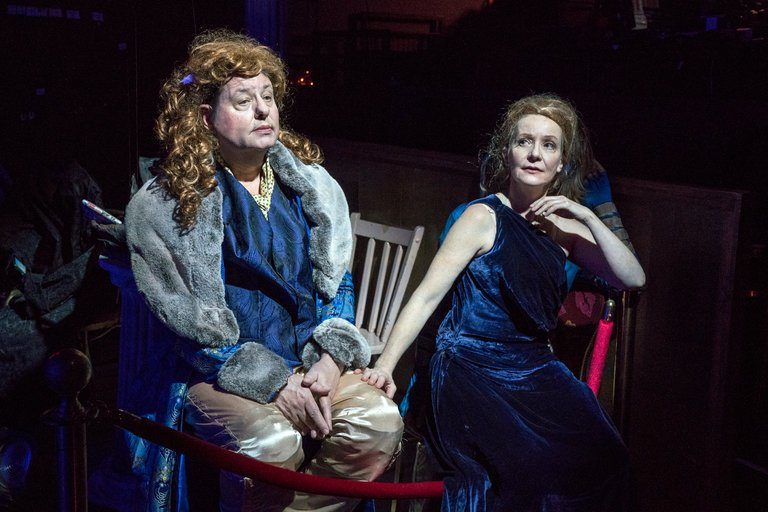 The ghost of Mary Shelley keeps rudely interrupting Mabou Mines’s Glass Guignol: The Brother And Sister Play, an exquisitely overstuffed assemblage of Tennessee Williams’s texts about his troubled sister Rose. Shelley appears at the top of the piece as an empty dress, texting back and forth with her companion Lord Byron about misplaced playbills, initial impressions of the performers, and aesthetic theory. What we are about to see is an “essay play contrived of Readymades,” she writes, alluding to Duchamp, “The Brother And Sister Play pretends there are such things as ‘Literary Readymades.’” Her analysis is sound, instructive, and wholly unnecessary. The image and idea of Frankenstein’s author witnessing Williams at his most hopelessly consumed by one of his own creations is more fertile and evocative than any learned exegesis of the proceedings to come could be. Additionally, director Lee Breuer and his co-conceiver Maude Mitchell have buttressed the piece with so many framing devices that none individually suffices as an organizing interpretive key. Instead, the company brings us on a thrilling moment-to-moment journey, with expert performers fluidly slipping into and out of a variety of characters and what Breuer calls “takes” on those characters. Our job is to keep up. When Glass Guignol pauses to announce its intentions via its Romantic peanut gallery, it isn’t necessarily telling us anything we don’t already know, but it does give us a welcome opportunity to catch our breath, and to appreciate its dramaturgy of cascading perspectives.

Like so much of Mabou Mines’s work, Glass Guignol is exhilaratingly digressive, but the primary concern here is the fraught relationship between artist and subject. Williams was haunted by Rose, who was diagnosed with schizophrenia as a young woman and subjected to a frontal lobotomy in 1943. She arguably inspired her brother’s best writing, serving as a model for so many of the ethereal and disastrously high-strung female characters who populate his plays. In Glass Guignol a perversely codependent brother and a sister pair, the only two remaining members of a traveling theater troupe, find themselves broke and stranded in a sinister “state theatre in an unknown state.” A life-size crucifix, a couple of people in gorilla suits, bars on the windows, and assorted coils of chains make it feel as though the theater might also moonlight as a chapel, haunted house, asylum, or prison. Mitchell plays the drug-addled Sister to Greg Mehrten’s Brother, whom “you would be likely to take,” it is said, “for a poet with sensibilities perhaps a little deranged.” He is a playwright and she his leading lady, his muse, creation, and monster.

Mehrten is marvelously arch and emphatically himself, radiating aggrieved superciliousness even in an Amanda Wingfield wig and with a corset comically cinched around his ample gut. Mitchell is stunningly transformative, seeming to effortlessly slip on or shed decades of decrepitude depending on which layer of her stage persona she is emphasizing. We see her as the fragile Laura of Glass Menagerie, as the raving, ravaged self-medicator Clare of The Two-Character Play, and the lobotomy patient of Suddenly, Last Summer. We last see her disoriented yet serene face peeking out from the swollen body of a giant, inflatable, crudely stitched-together monster suit in which her body is encased. In this grotesque image, we see all the pieces and versions of her personality that Williams attempted to reproduce in his plays come briefly and artificially to life, like something out of a nightmare Shelley might have had. We also see the disfiguring violence that has been done to Rose, that is done to anyone dismembered by life and reconstituted through art.

Glass Guignol is the company’s first production in their new dedicated space upstairs at PS122, which will officially reopen in 2018 after being closed for several years to undergo extensive renovations. It is, in some ways, a strange time for them to be finally establishing a permanent home base on First Avenue. Mabou Mines is now fifty years old, and the more luxury condo buildings go up in the East Village the more endangered its dwindling population of weirdos, bohemians, and intellectuals becomes. Nevertheless, Breuer and his merry band of deviants still make the best theater in New York. Would that they could all keep at it for another fifty years.

Created from works by Tennessee Williams and Mary Shelley

“Sons Of The Prophet,” Hampstead Theatre