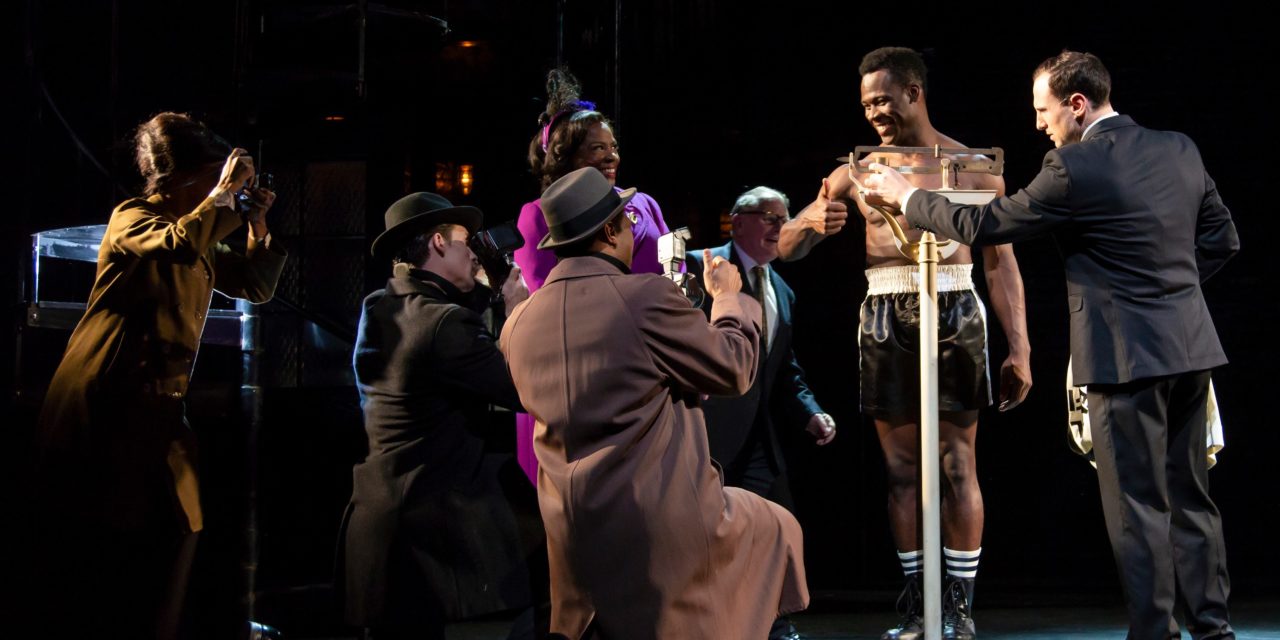 Michael Cristofer, author of the Pulitzer Prize-winning play The Shadow Box—a play about coming to grips with terminal illness—brings to the stage another painful tale of an individual facing a withering death. His new play, Man In The Ring, produced by The Huntington Theatre Company, hits on an emotional level in a way that is hard to shake. It’s a memory play, and, like most memory plays, it deals with themes of regret as the past and the present collide. Added to this already painful narrative are the effects of dementia pugilistica, a condition otherwise known as chronic traumatic encephalopathy (CTE). The memories belong to a real-life Caribbean boxer from the Virgin Islands, Emile Griffith—played in tandem by John Douglas Thompson and Kyle Vincent Terry, who depict the elder and younger Emile respectively. The dynamic portrayal of Emile by Thompson and Terry compel us to study the transformative effects of dementia. While Emile the elder is scared, confused, incoherent, weak, and babbling, Emile the younger is charming, powerful, and bursting with energy. It’s hard to reconcile how these two men could possibly share the same life.

An immigrant to the United States, Emile aspires to be a baseball player but finds himself pushed into a career in boxing, instead, where he proves to be a natural. He enjoyed quick fame and success, although his career is forever marred by a fatal encounter with Benny “The Kid” Paret (Sean Boyce Johnson). After Benny insults Emile with a homophobic slur, calling him maricón or “faggot,” Emile bludgeons him with an onslaught of punches to the head, eventually killing Benny. The play treats the fight as the climax of the first act and the center of Emile’s life story, around which all his memories revolve. He wails with regret, sees the ghost of Benny’s body, and eventually meets Benny’s son, begging him for forgiveness.

Another element the play explores is Emile’s sexuality. An open secret in the boxing community, Emile was a bisexual, and the play focuses a great deal on the developing relationship between him and his caretaker, Luis—played with charm and tenderness by Victor Almanzar. It’s a powerful image, seeing two men of color in a romantic embrace. The relationship is heartfelt and heartbreaking, as Luis takes care of this once powerful man who sometimes can barely remember who Luis is. Almanzar’s quiet dignity as he watches the elder Emile fight to express himself, to regain his lucidity, are among the most affecting moments of the play.

These events are, of course, colored by Emile’s struggles with his own memory, his inability to separate the images in his mind from the people standing before him. Consequently, this is a memory play dealing with the very struggle to remember. The elder Emile watches, sometimes in terror, sometimes in shame, sometimes in longing as his past lives on and on irrevocably in the present. Perhaps the play’s progression follows too linear a plot if it indeed wishes to put us inside the mind of this man in the ring. Emile’s life occurs to him in perfect sequence, even though Luis claims that Emile’s versions of events are faulty: “he gets it mixed up.” But the story doesn’t appear mixed up at all. Its narrative is classically tragic: a rise to prominence followed by a fall from the heights. The events are rarely as disorienting to the audience as they are to Emile.

What is more, Cristofer’s script struggles to depict fully the women in Emile’s life. Outside of his mother, Emelda, depicted with vivacity and wit by Starla Benford, the other women in the play are treated in a cursory manner. His wife Sadie (Krystal Joy Brown) is merely used by Emile as someone he neglects in the favor of men. We never get to know Sadie as an individual. Her absence at the end of the play suggests she mattered little in Emile’s old age. Equally as underdeveloped is Lucia Paret (Carla Martinez), the wife of the late Benny Paret. She only appears to provide context to her husband’s ill-fated fight.

Michael Greif, Tony-nominated director of many landmark musicals, such as Rent, Next to Normal, and Dear Evan Hanson, brings clarity, precision, and a perfect pace to Cristofer’s text. The first act pulses with the rhythm of the percussive instruments as scenes and locations blend through a dynamic interaction of light, projects, and a revolving stage. The excitement of the boxing is staged through blinding flashes of strobe lights that evoke the piercing pain of the punches. However, the strobing effect is too much and, at certain times, makes the boxing unwatchable. Likewise, Michael McElroy’s score effectively uses music—children songs from the Caribbean specifically—as a triggering beat for Emile’s ever-shifting memories. One song, in particular, serves as a leitmotif as Emile sings the ostinato phrase “brown boy in the ring, tra la la la la” idiosyncratically throughout the play. This is a beautiful effect, both alienating and comforting, as Emile’s memory of this song connects both Emile and the audience to his Caribbean upbringing.

The true value of the play remains in the dynamic portrayal of Emile by Thompson and Terry. His charm persists in both characterizations. His vivacity and joie de vivre never leave the stage, even in its most sullen moments, and their depiction of Emile ultimately makes the play feel like a celebration of this immigrant and bisexual living in the mid-century United States, a man whose true essence is and was, from a social standpoint, always outside the ring.