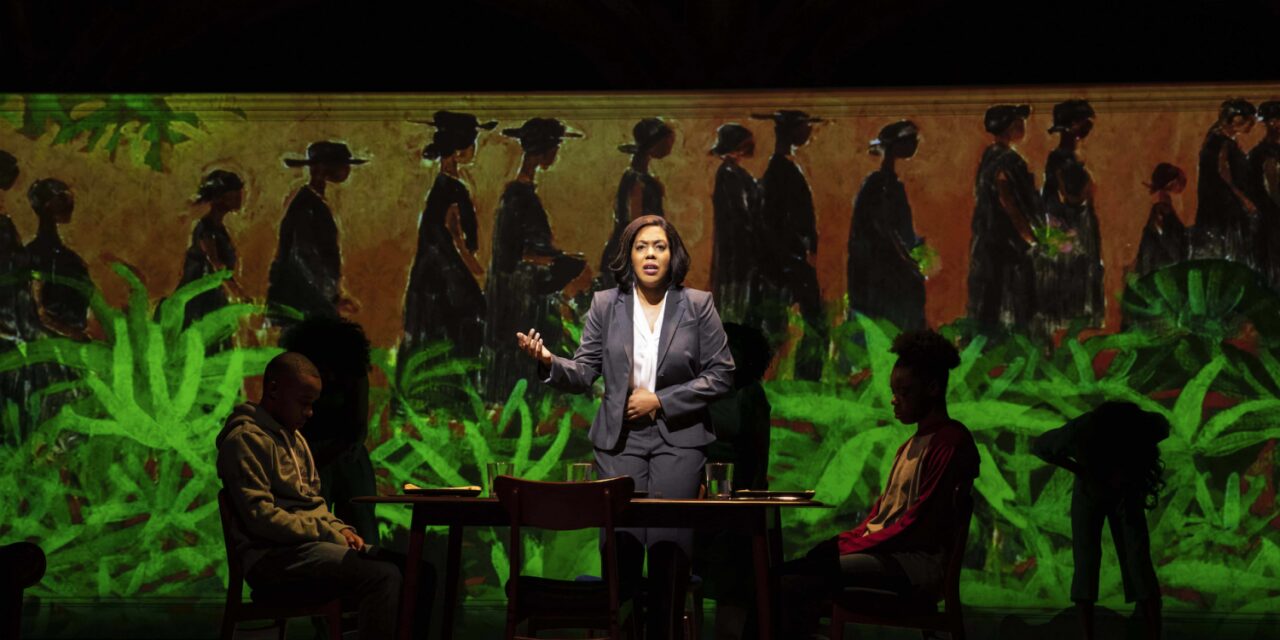 De’Adre Aziza (center) in the world premiere of “Eve’s Song,” written by Patricia Ione Lloyd and directed by Jo Bonney, running at The Public Theater. (Courtesy of Joan Marcus).

“Here is the house. It is green and white. It has a red door. It is very pretty. Here is the family. Mother, Father, Dick, and Jane live in the green-and-white house. They are very happy,” begins the novel, The Bluest Eye. Why does Toni Morrison choose to frame her story of a young black girl, so convinced of her own worthlessness that she fades from this earth entirely, with lines from a children’s book about picket fences and dogs, stable families and happy children?

Because it’s more than irony; it’s a coping mechanism. Tuck in your chair at the end of dinner and the world may – through the walls of your house crack and crumble – seem momentarily in order.

Most of Eve’s Song, The Public Theater’s world premiere by 2017-18 Tow Playwright-in-Residence Patricia Ione Lloyd, is spent around a table, and that’s because Eve’s Song is the story of an American family. “I embrace my American part of my African-American-ness,” says the daughter of this house, Lauren, naive, maybe, to the realities of black experience beyond an upper-middle-class suburb.

Here in this house, where a mother, daughter, and son live, where the air still struggles to fill the emptiness of divorce, still stirs to make sense of Lauren’s coming out as queer, being American is the name of the game. Go to school, go to work and tuck in your chair after dinner. Pass the biscuits, hand over the salt and when the racist blood of America pumps through its veins when it grabs you by the arm every day, keep walking.

But the walls undeniably do crack. Haunted by the ghosts of black America — not of those who were once enslaved, but of those whose blood has been freshly spilled at the hands of police brutality —  the walls of the Johnson house literally crumble as the family within, guided by a mother fighting to shield her children from the world outside, turns down the volume on the evening news. When Lauren (Kadijah Raquel) begins to date Upendo Haki Supreme (Ashley D. Kelley), a young, black activist who paints a picture of diasporic empowerment in opposition to Johnson’s quiet lifestyle, the contemporary ghosts of black lives lost only come closer.

The LuEsther Theater, where Eve’s Song currently resides, is an enormous space in the rafters of The Public Theater, cathedral-like in its chamber, cavernous on the stage. Its mammoth size begs an equally large presentation, and Lloyd has given its stage no lack of leviathan questions to explore. Queerness within the black community, the unrecognized killing of black women by law enforcement, the systematic murder of young black men, parenthood, divorce, ancestry and diasporic identity are all in active discussion throughout Eve’s Song. Its ambition may make it a worthy match for the LuEsther, but it’s also its downfall.

Patricia Ione Lloyd is an incredible playwright, and her focus on queerness and womanhood within black America brings her into conversation with the greatest authors of womanism. (Lauren’s favorite color is, to no surprise, purple.) But Eve’s Song’s many projects leave the play ultimately unfocused, struggling to make sense of its abounding questions within a short 100 minutes. As a result, the specters who haunt its stage, routinely circling behind its living characters, cease to be chilling, poignant monoliths of violence in America; instead, they creep as momentary and necessary reminders of the play’s juggling thematic projects.

Eve’s Song, though creative in its exploration, is thus a play marred by issues of scale and contrast. It looks to pin the activist, an Africanist perspective of Upendo (a name she chose for herself) against the more conservative, chin-up, “no one oppresses you unless you allow them to” perspective of the Johnson matriarch; essentially, Alice Walker’s Everyday Use in motion. However, confounded by the foreground of Upendo’s love story with Lauren, the contrast loses its power.

And while a commendable, truly marvelous performance is given by De’Adre Aziza (Tony-nominated for Passing Strange), she’s forced to carry a narrative that feels, for the bulk of its arc, disjointed, supported by visual metaphors (like cracking walls, projections of police brutality and crooked paintings of Africa) that are too literal for the nuance this play hopes to achieve.

Given time, Eve’s Song is not unlike a contemporary rendering of Marcus Gardley’s masterpiece, The House That Will Not Stand, interested just the same in what happens when the realities of oppression crash in the walls of black family. For now, confined to its lofty ambition, “Eve’s Song” may be content to only — itself no small feat — speak truth to power.