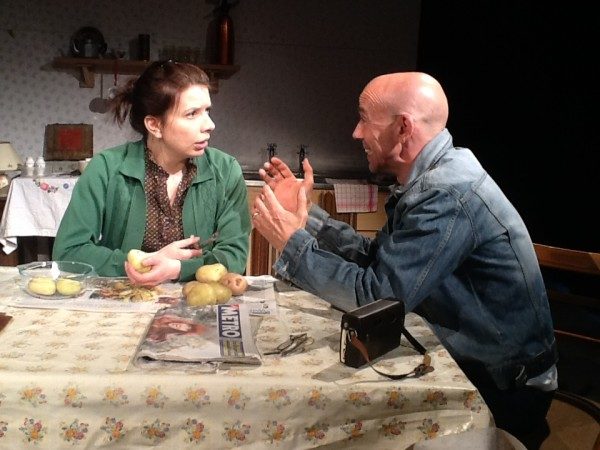 Ignition Stage, a small professional theatre company from Manchester, have taken upon themselves the challenging task of translating and producing Prah, a new play by celebrated Hungarian writer George Spiro, and the result is a considerable success for them.

What would happen to your life situation, your sense of self, your closest relationships if you won the lottery? This is the question the play asks, as we see the impact of a lottery-win, over 80 mins. or so of real time, on the lives of an impoverished married couple (played, with realism and wit, by Anne-Marie Draycott and Zach Lee) who seem first delighted, then tormented by their good fortune.  As the drama and tension unfold and we get to know the couple better, we see two people almost broken by poverty, embittered by the system and hopeless conditions which have offered no way out.

They chew over their struggle against adverse conditions and the shortage of opportunities to earn money. As a young couple, they have been full of willingness, hope and good intentions to make a living, but slowly they have lost these things. There are no good stories to tell, no good people to remember apart from the wife’s deceased father who was a decent man and who would have truly deserved the win.

Slowly conventional euphoria at getting the money gives way to something much darker, as the complications of what sudden wealth will entail – the need to leave the area, a persecuting flurry of attention from family and acquaintances – seem to ramify in front of them and soon, far from being buoyed up by it, the couple’s marriage itself is under threat. On the way, we see a human drama – how Hungarian is it? How universal? – about poverty, the struggle against life and to make ends meet, and provide for one’s family in a world where materialistic gadgets – things we are told we cannot live without – multiply each day. Underneath all these things is the central question: will they take the money or not? Poverty and struggle are the only life they know, but are they capable of embracing another? The decision, which we must wait till the end to see, is properly cathartic, but Hungarian-style, laced with a pessimism that convinces even as it dismays.

The play is perfectly cast, with both Draycott and Lee giving convincing performances, quickly establishing their rapport as a married couple and never being less than believable in all the ups-and-downs that this crisis of good fortune brings to them. But the real honors, perhaps, must go to the director and translator Szilvi Naray-Davey, a Hungarian ex-actress whose ear for British dialogue – even of the Alan Bennett-ish variety – is acute. It’s a testament to the quality of the production and performances that even in the Liszt room of the Hungarian Cultural Centre – a space without theatre-lighting and as different from a down-market provincial kitchen as one could possibly imagine – Prah was able to cast its blackly comic spell. Ignition plan more Central and Eastern European works after this, we are told, and are waiting for an Arts Council grant. On the basis of Prah, a small-scale production that punches well above its weight, it would be money well spent.

This article originally appeared in Central and Eastern European London Review on May 15th,2014 and has been reposted with permission.