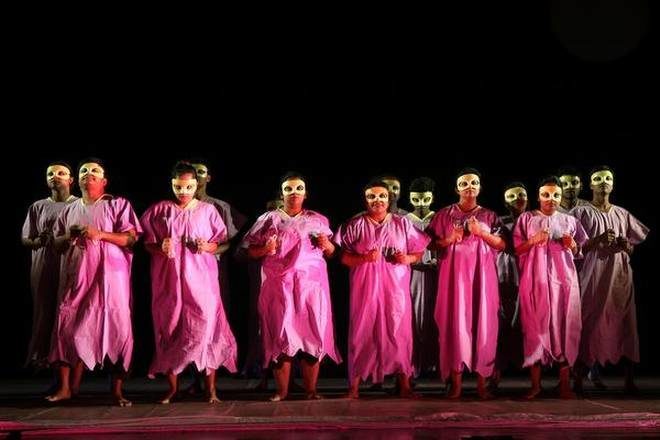 The ruthless exploitation of rural India by the predatory policies of the East India Company caused immense distress to Indian peasants which led to famines. The great famine in 1770 in Bengal is one of such case of man-made human sufferings resulting in the death of millions of impoverished peasants. Based on this tragedy, Syed Shamsul Haq, Bangladeshi poet and playwright, wrote a play titled Nuraldiner Sarajiban which was presented by Kalyani Natyacharcha Kendra, Kalyani at ongoing 8th Theatre Olympics.

The play focuses on the heroic struggle of the people against the Company and its henchman Raja Devi Singh, Zamindar, who instead of providing relief to the farmers imposes on them heavy taxes to please his British masters. Under the leadership of young Nuraldin, the farmers rise in revolt and a parallel administration comes into being run by the peasants themselves. This alarmed the company and a ruthless military operation begins.

Directed by Kishore Sengupta, who was fascinated by Nuraldiner Sarajiban with its epic dimension, went to Dhaka to meet and discuss the play with Syed Shamsul Haq who gladly gave him his consent to stage the play. The hallmark of the production is its evocation of revolutionary fervor to resist the oppression rather than to surrender to it. It also focuses on the dangers of Left adventurism that might defeat the cause of the oppressed.

The play opens with the off-stage recitation of a poem by the playwright which glorifies the revolutionary deeds of Nuraldin underlining the fact that the struggle of oppressed peasants will go on so long as peasant’s exploitation continues and new Nuraldin will emerge to lead the movements. The play unfolds in flashback. We watch two forces representing peasants and the Company using different costumes. The peasants are organized and led by Nuraldin. His friend Abbas is a realist who again and again advises Nuraldin not to resort to adventurism and take hasty steps to attack the well-organized forces of the company. In his revolutionary zeal, Nuraldin wants to attack the oppressor—Raja Devi Singh and his British masters without losing time. We also witness the scene where Nuraldin and his wife meet who needs a new sari. He tells her that hundreds of peasant women are making sacrifices to make the struggle against Zamindar a success so that they could live in freedom and be masters of their own land and she should be ready to suffer for a better future.

On the other hand, the production reveals contradictions in the ranks of the company who are haunted by the fear of defeat. A British colonel accuses a British lady of dereliction of duties instead spending time on her love affair. The lady debunks his accusations and refuses responsibility for the reverses. Finally, the army is reinforced. The peasants armed with lathis and indigenous weapons fight a well-equipped army trained in warfare. Despite the bravery of peasants, they lost the war and their leader along with thousands of peasants became martyrs. 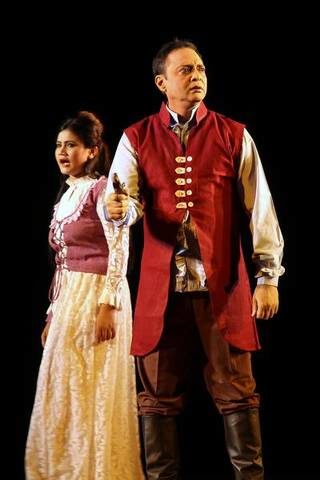 The entire action takes place during night which is established through the lighting design and a bright moon projected upstage. The imaginative choreographic patterns the performers followed in the fighting scenes imparted martial element to these scenes. The costumes and stylized marks and uninterrupted flow of action and the revolutionary undercurrent made the production riveting. In fact, the play is not only about the entire life of martyr Nuraldin but it is the heroic chapter of peasants resistance and revolt against brutal exploitation by British colonialists. In fact, Indian history is replete with rural miseries caused by man-made famines and the people’s resistance and struggle against foreign rule.

The audience was impressed with the fine performances by the entire cast. Dipankar Das as Nuraldin gives an outstanding performance, imparting to his portrayal a great deal of vitality and conviction.

So does, Anirudha Biswas as Abbas, the realist strategist, who fights who tries hard to explain his comrade Nuraldin to resort to tactics to defeat powerful company forces and even though when his advice is ignored he and Nuraldin fight shoulder to shoulder against the enemy. Sanchita Das, the British lady, has undoubted impressive stage presence as he confronts the colonel with forceful arguments maintaining her dignity.

This article originally appeared in The Hindu on March 23, 2018, and has been reposted with permission. 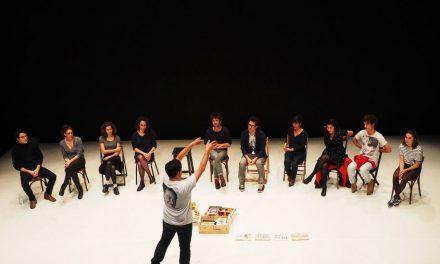