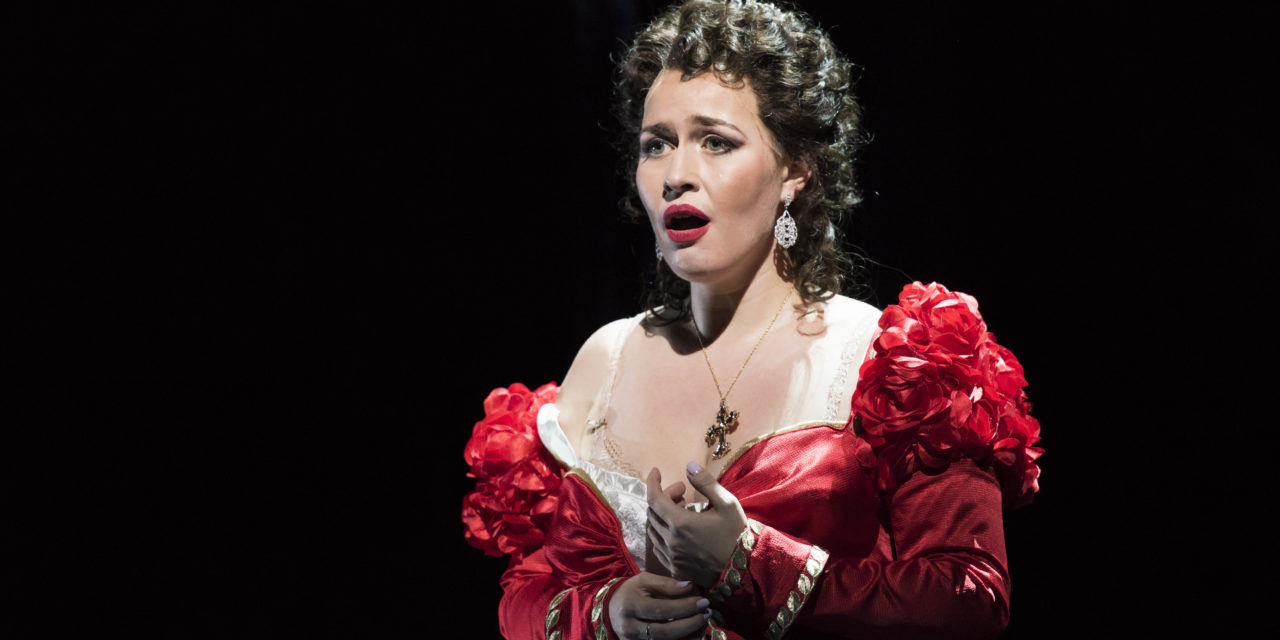 Riding the line between political thriller and melodrama, Joseph Kerman described Puccini’s Tosca as a “shabby little shocker,” but the piece is not without fine musical gestures and is a platform for the ultimate in lyric voices and verismo expression. Historically, the opera is also not without its enthusiastic devotees, and on Friday, the crowd was not disappointed by BLO’s vocally beautiful and dramatically absorbing production at the Cutler Majestic Theatre.  It was a mainly traditional staging with just the right amount of flash.

Set in Rome in 1800, the work follows opera singer Floria Tosca and painter Mario Cavaradossi as they aid the escape of a political prisoner and face the chief of police, Baron Scarpia’s threats of torture, rape, and execution during the Napoleonic invasion and political turmoil throughout the city. A devout though passionate woman, Tosca agrees to submit to Scarpia’s advances in exchange for saving the life of her lover, Cavaradossi, through a staged execution and travel papers for their escape. Instead, she murders Scarpia, only to find out that he never intended to give the correct order, and a real execution takes place. Shocked that her lover was actually shot dead by firing squad, she hears shouts of revenge for her actions against Scarpia and ends her own life, as well.

As the fiery Floria Tosca, Elena Stikhina delivered a creamy tone that seemed effortless and a strong dramatic presence. Her aria, the famous, “Vissi d’arte” was a highlight in its committed stillness and emotive power, as she asks God why she should meet this fate when she has given her life to art and love. Perhaps due to the concentration needed for the timing of the final gunshot, Stikhina’s final phrase seemed to suffer in emotion and direction a bit and instead felt a bit too accurately executed. There was enough dramatic tension in the moment to convey the shock though, and it barely suffered. In a demanding role like this, it is sometimes necessary to choose to be vocally safe.

Jonathan Burton’s Cavaradossi produced a huge, easy sound in the top of the range that connected beautifully and effortlessly to the middle of the voice. His vocal power was matched with the way he threw himself into the character, at turns conveying a smiling easiness with his lover in the opening and his conviction while remembering moments with her during his character’s final hours in “E lucevan la stelle”. 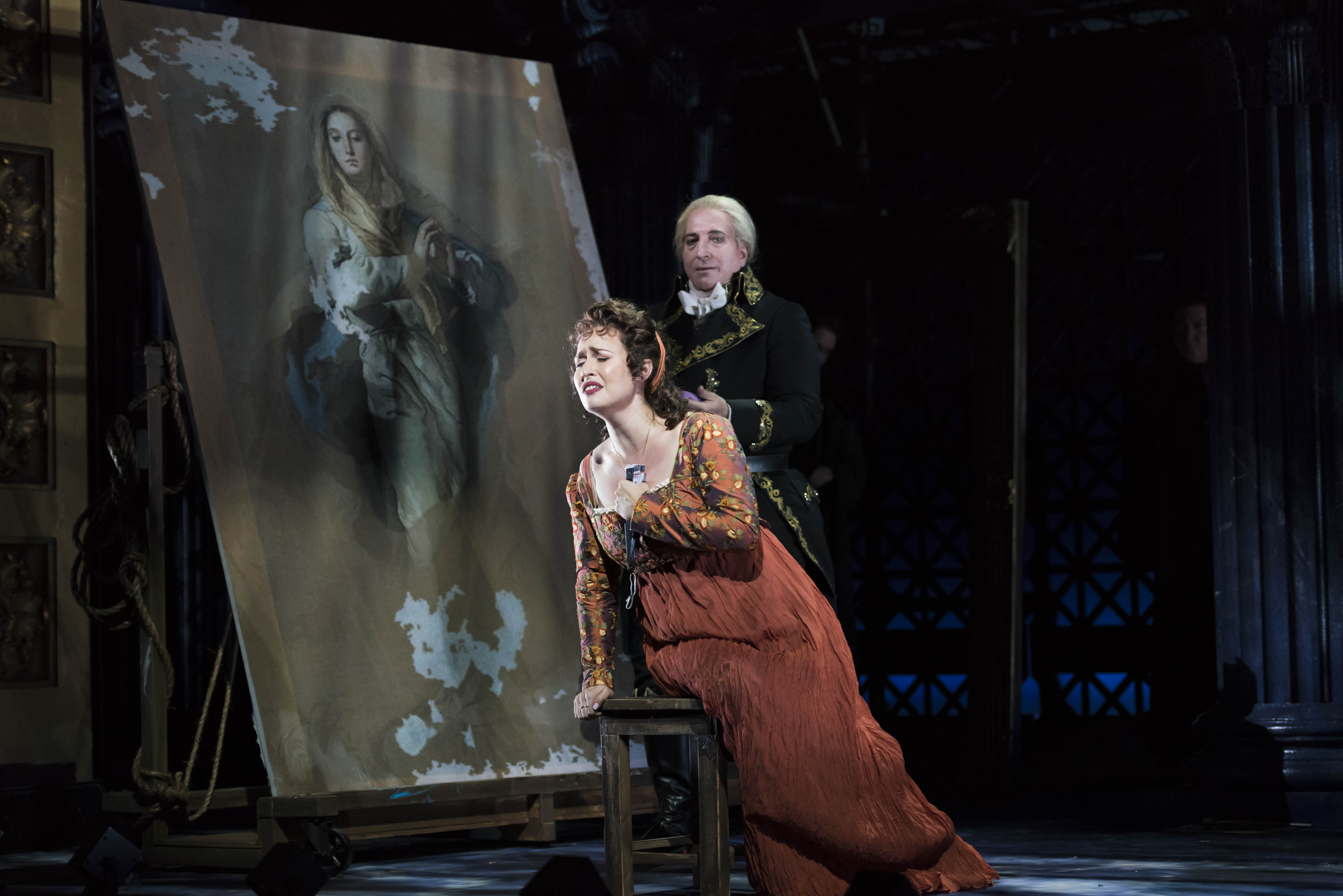 Tosca (Elena Stikhina) is overcome when Chief of Police Scarpia (Daniel Sutin) tried to convince her that her lover is cheating. Photo Credit: Liza Voll Photography

As Scarpia, Daniel Sutin was perhaps a bit stiff onstage, emphasizing a more robotic villain than a cunning one, but this would have been more problematic had the voice itself not been so stunning, in the true sense of the word. Not to say that the singing was always beautiful, and nor should it be, but the multiple colors he was able to evoke with his ample, rich baritone was astonishing. From a menacing growl to more ample phrases with a sheen, he displayed the full range of his character in the voice itself.

James Maddalena in his comedic bellowing as the Sacristan and David Cushing as the escapee Angelotti were in great form as were those playing smaller roles throughout.

The orchestra led by Maestro David Stern appropriately swung the full range of emotions of the opera’s pendulum, emphasizing Puccini’s major contrasts – the ringing of Rome’s church bells and the salve of romantic love versus the hostility of the surrounding political corruption. The chorus, led by Michelle Alexander, provided a powerful backdrop to Scarpia’s Iago-like oath at the end of the first act.

The set, designed by Julie Noulin-Mérat, was “minimalist” for a Tosca, but still held plenty of visual appeal. Corinthian columns punctuated two levels connected by a spiral staircase. This was the essential backdrop of every act, with a scrim on the balcony changing scene images. It managed to feel grand without being too literal or distracting from the action. The orchestra was placed in the foreground on the balcony, in part as was mentioned in the program, to accommodate a full Puccini orchestra in the lack of adequate space in the pit of the Cutler Majestic. The instrumentalists and singers were surprisingly well balanced from orchestra seating.

Costumes by Deborah Newhall were opulent and striking in the typical tradition of the opera. Scarpia’s cronies, in particular though stood out as pallid, sinister, unscrupulous group of derelicts. The top of Tosca’s Act 2 gown seemed a bit ill-fitting until it was made clear why. Scarpia rips it open, exposing her, and highlighting a very uncomfortable, but unfortunately timeless example of male abuse of power.

Directorial additions include an Act 2 opening to Scarpia scarfing down chicken legs, which was viscerally gross on several levels from a man who admittedly takes his female conquests willingly or unwillingly, with both being just as arousing to his character. The piece presents a decision in Act 3 as to whether Cavaradossi believes Tosca when she tells him that his will be a staged execution. Sometimes staging makes it very clear that he is aware or unaware of the reality that Scarpia has not actually ordered a false execution. In Manich’s interpretation, it is a bit ambiguous, which kept things interesting. When Cavaradossi says he will perform like Tosca does on the stage, does he actually believe he will survive or is he referring to false bravado in that very moment convincing Tosca of his optimism? In keeping perhaps with the director’s desire to show the female protagonist’s strength, it is not evident that Tosca is the only one left in the dark at this moment. 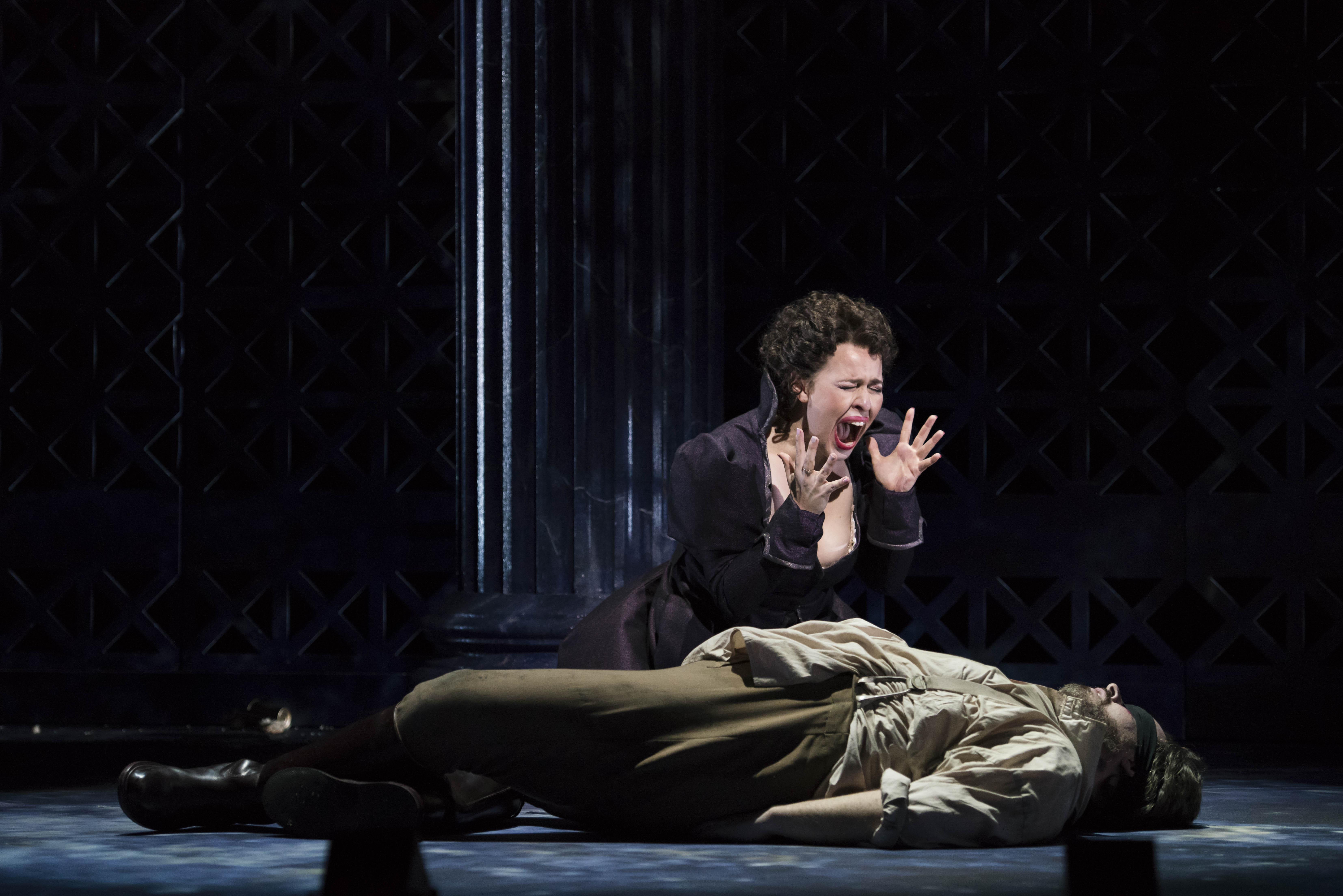 In a bucking of tradition at the end, instead of jumping off the Castel Sant’Angelo, Tosca grabs a pistol she had stolen from Scarpia’s desk and shoots herself in the head before falling with her body strewn over Cavaradossi’s corpse in the shape of a cross. This seemed in no way to diminish the shock of the opera’s final moments.

It’s refreshing that BLO chose to open their season with a vocally solid, well-done classic, because as Executive Director Esther Nelson said in her remarks that evening, there were many new patrons to the art form in the audience. The voices themselves were as exciting as the drama in a city of relatively small opera houses and on average, less grand opera than other cultural hubs. The audience numbers point to the enthusiasm for such works performed by outstanding singers at the heights of their craft. Given that the company tends to delve into the more modern aspects of older works, it will be fascinating to see what they have in store for their upcoming season of 20th and 21st century selections.