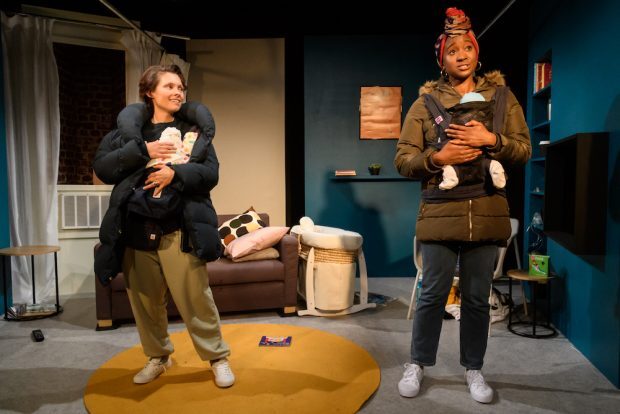 A couple of days ago, I watched a live stream of Milk and Gall, an American-based playwright and screenwriter Mathilde Dratwa’s new play at Theatre 503. Set in a Brooklyn apartment, the plot shows what happens to new mum Vera, who gives birth to her baby boy Roddy on election night 2016, and spends the first year of the Trump presidency trying to hold things together as the world seems to go crazy. This debut play, which was shortlisted for the 2018 Theatre 503 International Playwriting Award, explores the landscape of the personal and the political in the tense relationships between Vera and her husband Michael, her second-wave feminist mother Barbra, Amira her Syrian-American best friend — and her Alexa. The main themes are the uncertainties of motherhood and confusion about this role. The excruciating pains of childbirth are quickly followed by the awkwardness of breastfeeding, then loneliness and depression. Dratwa’s writing is a fine mixture of maternal anxiety and satirical anger, dealing with racial tensions as well as anti-Trump protests. She focuses perceptively on the terminology of childcare, teasing out the metaphorical significance of words and emphasizing the infantile mindset. The result is a mix of elated happy vibes and emotionally truthful downers. The 90-minute piece, directed by Lisa Spirling — with her baby daughter in rehearsals — is designed by Mona Camille. Vividly realized, the production is full of sharp humor, with MyAnna Buring excellent as Vera, and plenty of physical details, from giant syringes to a cow costume for the sex scene, as well as a Trump mask for the baby (although the text also includes criticism of Obama’s presidency). For the French sequence, berets and false mustaches are worn. The music of Also Sprach Zarathustra raises a smile. If the show makes up in energy what it lacks in dramatic conflict, its moments of bleakness balance the hilarity of toilet humor perfectly. Great stuff.

This article was originally published by Aleks Sierz on 2 December 2021 and has been reposted with permission. To read the original article, click here. 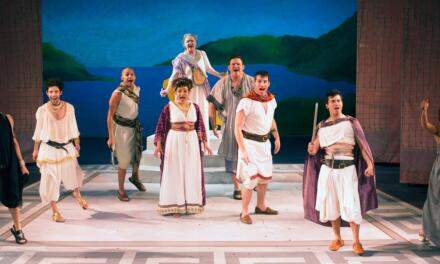