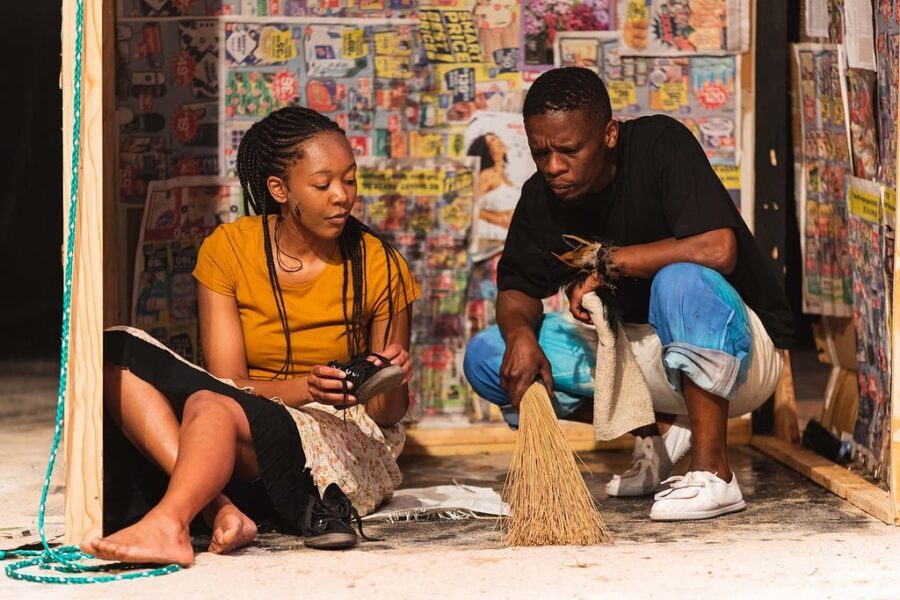 Metsi, staged at the State Theatre is a daring and brave production in how it includes elements of dance, music and drama into one tapestry of creativity. In doing this, it creates two worlds which are seemingly unconnected but which at various intervals connect and as the characters navigate these worlds they are often seemingly dealing with both the physical and metaphysical world concurrently.

In taking a love story and having it retold through dance, the narrative becomes much more nuanced and richer and makes for a compelling production.

Though at times it does come off as a bit overwritten, the story itself is familiar yet strange/fresh due to how the creative talents of van Tonder and Noko come together to make this a worthwhile evening of theatre. The set itself is another layer in how it depicts a barren landscape yet one which contains this odd love story between two characters who could not be more different if they tried.Using Metsi both in its literal and other meanings is both clever and engaging, though the repetitions of both water and the garden, which also is part of the set sometimes do come off as tacky and unimaginative.Van Tonder and Noko are fast making a name for themselves as a creative force having also collaborated on Bleed, The Coin, Kroes Hare, The Cursed Vagina and Kwaito in Sluighuis among other productions.

The dancing duo of are also not new and audiences will remember them from their double-bill show which played at TX Theatre in Tembisa, while the actor has appeared in numerous productions such as Angola Camp 13 among others. Metsi was meant to have been showcased live but due to Covid-19 had to debut on the South African State Theatre’s streaming platform in addition to featuring on the main program of the National Arts Festival which was also streamed, though all the productions were pre-recorded.

Metsi is also one of the productions which have benefited from the partnership between the South African State Theatre and Ster Kinekro Theatres and will be screened from 19 November – 12 December 2021.

Metsi was written by and directed by Hannah Nokwazi van Tonder, with dramaturgy and music composition by Paul Noko and Choreography by Phumlani Nyanga. It featured actors Balindile ka Ngcobo and Abongile Maurice Matyutyu, and dancers Xolisile Bongwana and Thulisile Binda. It was produced by Sketch Productions and was at the South African State Theatre in Pretoria from 1 – 5 October 2021. It will be screened in Ster Kinekor cinemas from 19 November – 12 December 2021.

This article was posted on The African Magazine on November 6, 2021, and was reposted with permission. To view the original article, click here.