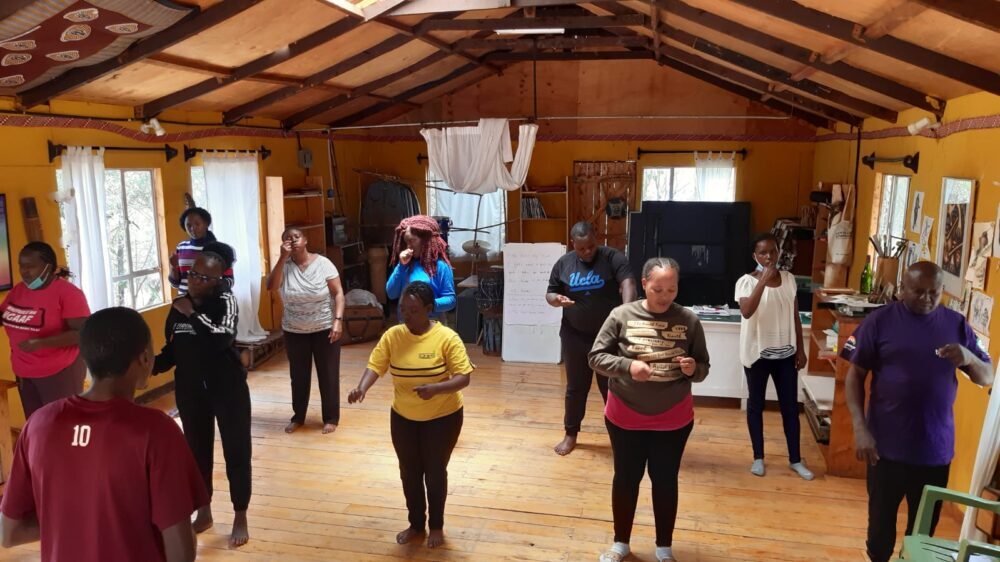 As a practitioner of the arts the burden that I always have is how can I give back? Philanthropists give money, ordinary people donate books, clothes, food but art as a medium can transcend time and be shared many times over, translating differently to each person that interacts with it.

You Will Never Walk Alone brought together ten mothers of children with disabilities from all corners of the informal settlements of Nairobi city to share their stories and experiences with disability. The women were and man were the first cohort of what will hopefully be a project that goes beyond this pioneering group.

The 2019 Kenyan census reported that 2.2% of Kenyans live with some form of a disability. These figures are rather low and in conflict with the global prevalence rate of 15%. In the report, Status of Disability in Kenya: Statistics from the 2019 census one of the possible reasons for the low prevalence is the stigma associated with acknowledging disability which might have prevented accurate reporting.

Sadly, it is not uncommon to still find parents or family members hiding disabled children, tying them to a bed or treating them like curses, or a bad omen that needs to be vanquished.

Even though there are more people living with disabilities in the rural areas than in the urban areas, (2019 Kenya Population and Housing Censuses Volumes I-IV) in the slums of Nairobi, life becomes harder for, and with a child who has a disability.

It is against this background that Call Africa Kenya, a nonprofit organization “inspired by principles of human solidarity and working to fight the causes of poverty and social injustice so to build a better world in which all people are guaranteed dignity, human rights and equal opportunities.” felt the need to take a new approach in educating these communities around matters of disability. You Will Never Walk Alone was a collaborative effort between Call Africa and The Theatre Company of Kenya.

The participants of this project were parents of children with disabilities drawn from various slum areas in Nairobi. People who have experience, education and skills as Community Health volunteers and this initiative was another feather to be added to their hats, this time creatively.

Set in the serene Karichota Retreat Centre in Nanyuki the participants were taken through a month-long program where they got in touch with their bodies through yoga, learnt about the basic rules of staging and devised a 15 minute play based on their real life experiences with disability.

Actor Thuita Christopher himself trained under The Theatre Company, was one of the facilitators of the project and cited it as a humbling experience. “Our mantra was Art Heals, Sanaa Ponyevu. In the beginning it was hard, but by day 3 during our morning sessions of sharing we realized in a way that this was Drama Therapy. The women, most of them 35 years old and above, reported feeling “young again.”

“We had a lot of vocal sessions and one of the women was excited to now have the tools to help her child communicate.” Thuita recalled in a zoom interview.

He mentioned a quote he came across during the workshop: ”The immense potential of theatre is to mobilize community and bridge the divide.” The interactive nature of theatre is such that it can address serious issues in a memorable way, which is what the facilitators hoped will be the takeaway for anyone who sees the piece. Most important too was to garner support from the community for families affected by disability.

As opposed to having the training running straight through the month of September, the sessions were broken down. One week, the women were trained, sent home to rehearse the material, then a week later they were to go back to complete the training. Afterwards, their piece was to tour schools, churches, within their community.

The recurring theme I hear about people who give is the inexplicable feeling that you gained much more. So I put this the Thuita, one of the facilitators, “I learned a lot of patience. I have never had to direct someone who is almost my father’s age (they had one man in the group who was 65 years old), so this meant I had to tread carefully with how I was instructing them. The basic knowledge that I have of theatre and simple instructions such as ‘move stage left’ was something I had to break down for them.” He spoke of his experience.

Another takeaway for Thuita was how inspired he became from their life stories- gaining a whole new understanding and perspective of life.

The best way to give back as a theatre artist Thuita offered, is to start where you are. There is possibly a church, school, children’s home where you can volunteer your time and skill. These small acts of service helped him gain visibility. Also, read widely, learn as much as you can on theatre so that you are training from a point of knowledge.

After weeks of working on the project, the participants created a devised piece, USAWA a Swahili phrase which translates to Sameness. It is about a young girl who on top of having polio, gets pregnant at an early age. This, along with the struggles and frustrations of living with a disability pushes her to make some hard decisions. The participants performed this piece in different communities to engage them on issues of disability, and living with and supporting children that are differently-abled.

This article was posted on The African Magazine on October 31, 2021, and was reposted with permission. To view the original article, click here.