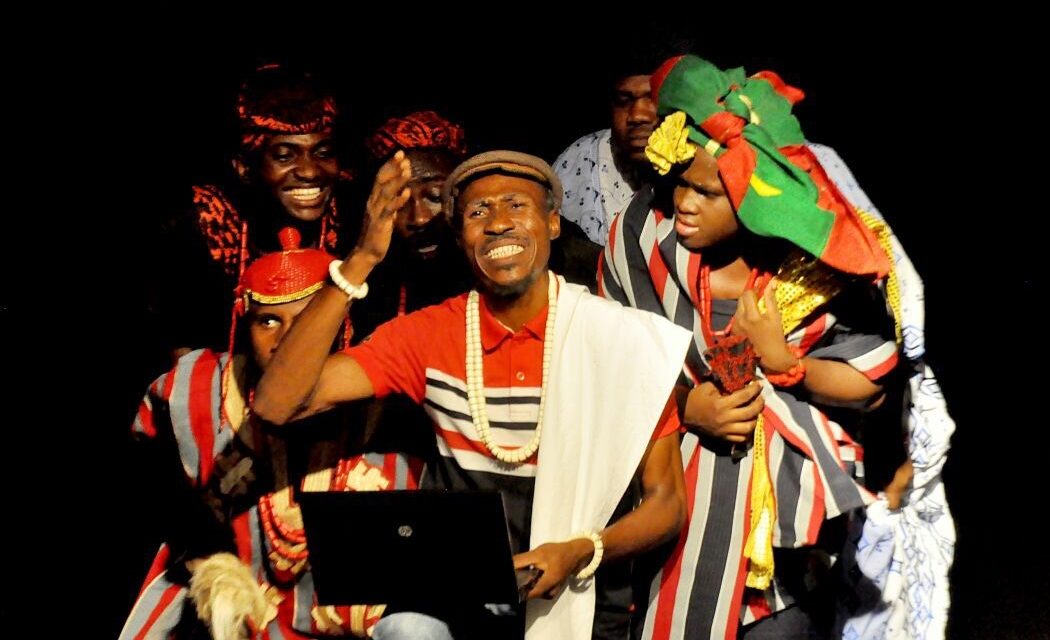 In present-day Ilè-Ifẹ̀, the birthplace of Yorùbá civilisation, a very urbane monarch, His Imperial Majesty Ọbá Adéyẹyè Ẹniìtàn Ògúnwùsì, Ọọ̀ni Ọ̀jájá II, is very perturbed. Some of his Oduduwa subjects and Ifẹ̀-born Hausa tenants, living and trading in peace long before his 1974 royal birthday, allowed a misunderstanding between the Yorùbá-speaking wife of a motor-park thug and a Hausa-speaking man of the same class degenerate into an ethnic bloodbath, widespread arson, mass displacement of the Hausa community in Sabo Ifẹ̀, Northern Nigerian uproar, relative Southern silence, federal police arrest and arraignment of solely Yorùbá suspects, and the first socio-political test of his less-than-two-year reign.

In the twelfth century, Ìgbò warriors (no relation to the Igbo of South-Eastern Nigeria and homeland of Biafra agitations) raided Ilè-Ifẹ̀ for slaves and supplies, ravaging the economic community of Yorùbá souls and causing headaches for the revered monarch. Mọ́remí Ajasoro, the wife of Ọ̀raǹmíyaǹ, the fifth Ọọ̀ni of Ifẹ̀, sought the help of Esimirin, the local river deity, who told the desperate mother of one to surrender herself to the raiders in order to learn the anecdote of their success. In exchange, Mọ́remí promised to give Esimirin the “richest sacrifice she could afford.” Mọ́remí was captured by the Ìgbò raiders, who wore inflammable grass and scary raffia palm costumes. After integrating herself into the lifestyle and household of her ancestral enemies, she learnt their weakness. Mọ́remí returned to Ifẹ̀, disclosed the secret of the burning torch and set their Ìgbò enemies on fire during the next raid. Esimirin demanded payment, and Mọ́remí offered the richest sacrifice she could afford: her only begotten son, Olurogbo.

About a millennium after Mọ́remí’s renowned feminism, Ọbá Adéyẹyè Ẹniìtàn Ògúnwùsì, the fifty-first monarch of Ifẹ̀, erected the tallest statue (42 ft.) in Nigeria and the third tallest in Africa (after the Great Sphinx of Gaza, 66 ft., in Egypt, and the African Renaissance Monument, 161 ft., in Dakar, Senegal) as part of the 2016 Edi festival, a celebration of Mọ́remí’s heroic contributions. At the spot where she once lived, Mọ́remí stands with a torch in her hand like the Statue of Liberty, an elevation from being the glorified name of infamous female hostels at the University of Lagos, Akoka, and the Ọbáfẹmi Awólọ́wọ̀ University in Ilè-Ifẹ̀.

As part of the World Theatre Day celebrations in Nigeria, the Crown Troupe of Africa, the twenty-one-year-old theatre company co-founded by Ṣẹ́gun Adéfìlà, the Bob Marley of Nigerian stage and plays, produced and performed Mọ́remí: Revised Standard Version, written by Ayọ̀délé Arígbábù, as inspired by Sewedo Nupowaku. It was staged at the Amphitheatre in Freedom Park, a commercial art installation on the grounds of the old colonial prison yard on Broad Street, part of the pseudo–Wall Street in Lagos.

Almost every weekend of 2017, Tóyìn Oshinaike, of One Six Productions, and Toritseju Ejoh, of Oxzygen Koncepts, have been hosting the Park Theatre Series, an initiative of their thespian companies, to provide staged entertainment at the former penal institution. On the weekend of World Theatre Day, they hosted the Crown Troupe of Africa and their performance of Mọ́remí before an audience of upper-class Lagos and members of the National Association of Nigerian Theatre Arts Practitioners.

The drumbeat of war, the warm lights in darkness, and a man jumps into the arms of his wife: the beginning of the show foreshadows the end. Yet the woman must politely berate her husband without wounding his pride; this is the premise of Yorùbá feminism: advancement via marriage, political clout by virtue of character and who shares your bed. In the revised standard version of Mọ́remí, Oba Efizie is inept, his council of chiefs are cowards bereft of ideas, Iyalode Oshobi is a selfish market-women leader, and Mọ́remí is the ambitious do-gooder and mother of Olurogbo, a philandering prince who “only becomes a man when the compound is empty, when real men have gone to war.”

Between his seventh and tenth birthdays at Omu Aran, a little over one hour and fifty-five kilometres from Mọ́remí’s birthplace at Offa, the director Ṣẹ́gun Adéfìlà was groomed to masquerade during the Ọdún Eégún festivals of his hometown. After his post-secondary menial jobs as a clerk, bartender, security guard and cleaner, he returned to theatre arts in 1995, understudying for Paul Young and Thompson Tabi at Black Image, a Bariga-based dance theatre company. Afterwards, he co-founded the Crown Troupe of Africa with some friends in 1996, obtaining a certificate in drama from the now-defunct Centre for Cultural Studies at the University of Lagos in 1997 and a bachelor of arts from the same university in 2002.

Ṣẹ́gun Adéfìlà makes cameo appearances as Oba Alayeremo (aka Oba Efizie) and the Yoruba diety Obatala. His mentees Eseosa Eguamwense and Uche Enechukwu play Mọ́remí and Olurogbo, respectively. Twelfth-century water pots are plastic tubes from water dispensers; the Babalawo consults the Ifá oracle with the aid of a laptop, Google and a poor internet connection: a comic clash of generations, the influence of modern inventions and technology in ancient Ifẹ̀. In a style reminiscent of Pa Ikhide Ikheloa’s literary inventions, Ayọ̀délé Arigbagbu’s play navigates the intersections between modern female ambitions, ancient rights of a Yorùbá woman, and the present interpretations of feminism.

Adéfìlà must be commended for the original songs, acrobatic dance routines, and mastering of outdoor realities. Despite the heavy rain trying to interrupt the show, the seasoned thespians continued on stage, irrespective of the drumbeat of nature, the cries of thunder and flashes of lightning. Soaking wet and drenched without mercy, the cast and crew in their dedication embody the resilience of Ifẹ̀ and the determination of Adéfìlà to continue after twenty years on stage.

In present-day Ilè-Ifẹ̀, a performance of Moremi: Revised Standard Version by the Crown Troupe of Africa may lift the town from depression and cure His Imperial Majesty Ọbá Adéyẹyè Ẹniìtàn Ògúnwùsì, Ọọ̀ni Ọ̀jájá II, of his recently acquired headache.