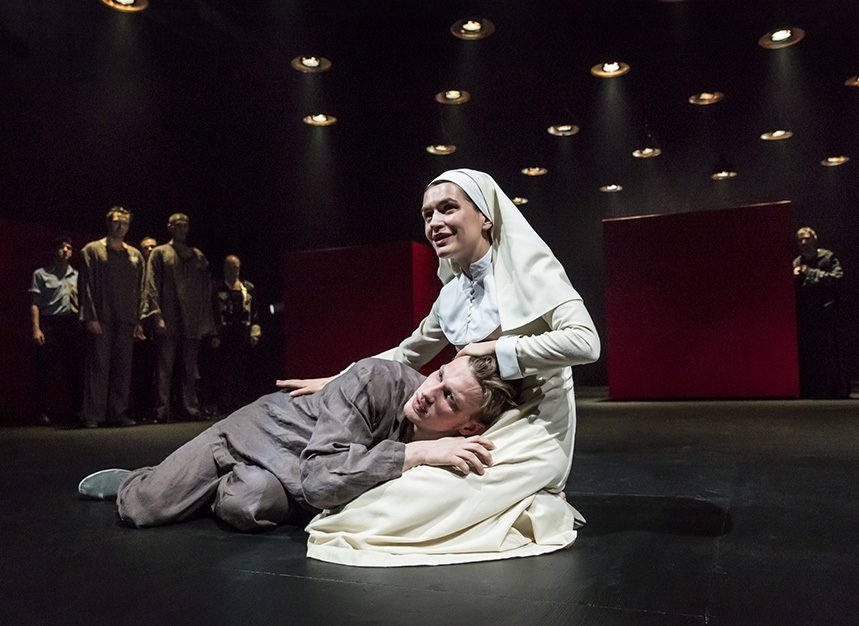 Cheek by Jowl’s production of Shakespeare’s Measure For Measure, performed in Russian by actors from the Pushkin Theatre in Moscow, will shortly conclude its all too timely tour of New York and Boston. Directed by Declan Donnellan, the production brings chillingly to the forefront the play’s major themes of coercion, hypocrisy, justice, mercy, and forgiveness. The resonance of this play with the #MeToo movement and especially the recent United States Supreme Court confirmation of Brett Kavanaugh despite credible accusations against him of sexual harassment is belied by the production’s age; it premiered in September 2014, anticipating #MeToo by fully three years. But of course, at stake in the play is the abuse of power and women’s sexual autonomy, showing that the movement is at least four hundred years overdue.

The play takes place in an imagined Vienna, which here stands for Sodom. An upstanding young deputy, Angelo, has been brought in to restore order and morality, and his first act is to enforce a long-dormant law criminalizing non-marital sex. He imprisons an unmarried pregnant woman and sentences her fiancée Claudio to death. When Claudio’s sister, the novice Isabella, comes to Angelo to beg for her brother’s life, he offers her a settlement of sorts: Angelo will pardon Claudio in exchange for sex with Isabella.

Nick Ormerod’s sparse and striking stage design consists of only a few pieces of furniture: three huge red multi-purposes boxes and a desk, alternately used by Angelo and the prison warden. The desk becomes a symbol of the state, and the characters’ position on one side or another illustrates their relative power or powerlessness. The bright red boxes occasionally swiveled to reveal various groupings of prisoners and fornicators inside, stand out sharply against the bare-bones costuming: Isabella wears a white habit, prisoners and friars wear shades of brown and beige, and everyone else is in black.

In the absence of a stage set, the deft company provides a sense of movement and scene changes, rushing across the stage like a school of fish, carrying away and depositing actors as the plot demands. This choreography produces the sense of the community as a single organism, conforming to norms and responding uniformly to changes in the environment.

In the production’s most powerful moment, the audience too becomes drawn into this body. As Isabella comes forward to expose Angelo, she speaks directly to the Viennese public, a role the audience plays by proxy. When she faces us head-on, speaking with perfect composure, we are unavoidably reminded of the testimony of Dr. Christine Blasey Ford, the psychology professor who brought forth the first accusation against Brett Kavanaugh during his Supreme Court confirmation hearings. When Kavanaugh testified in response, he was indignant and infuriated, behavior that, if the gender roles were reversed, would be labeled hysterical and hence negligible. The final act of the play is a reckoning, and Isabella is fortified by her faith in both God and the justice system as she brings forth her accusation against Angelo. Anna Vardevanian as Isabella is every bit as composed as Dr. Ford, but Andrei Kuzichev, in the role of Angelo, responds far more soberly than did Kavanaugh; anything else would come across as over-acting. The scene is at once chilling and cathartic.

While the staging seems to speak in the current American idiom, the transnational essence of this production, which has been performed in Russia, the UK, France, Spain, and Estonia, prove the play’s timelessness and universality. This is the second collaboration of Cheek by Jowl with the Pushkin Theatre on a Shakespeare play; the first was The Tempest. Their other co-productions have been classics of the Russian stage, Chekhov’s Three Sisters and Pushkin’s Boris Godunov. The poetry of Shakespeare is among the chief pleasures–and privileges–of native English speakers. For us, its translation into another tongue is, to borrow a term from the Russian literary theorist Victor Shklovsky, defamiliarizing. But anglophone audiences will be rewarded for putting themselves through the difficulty and discomfort of the play’s new foreignness. Being unable to understand speech or adequately respond is an uncommon experience for Americans. It strips us of our agency and powers of self-defense, and this powerlessness in some small way evokes Isabella’s position.

But of course, in this production, you have recourse to the English-language supertitles, which, for many of us, make the power of Shakespeare’s verse even more perceptible than listening to the actors’ speech. And there’s some comfort, in moments when I too feel powerless and voiceless, in knowing that I can look to Shakespeare’s text and find my language again. 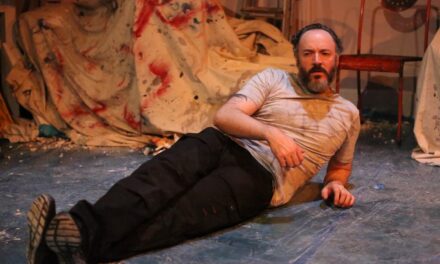