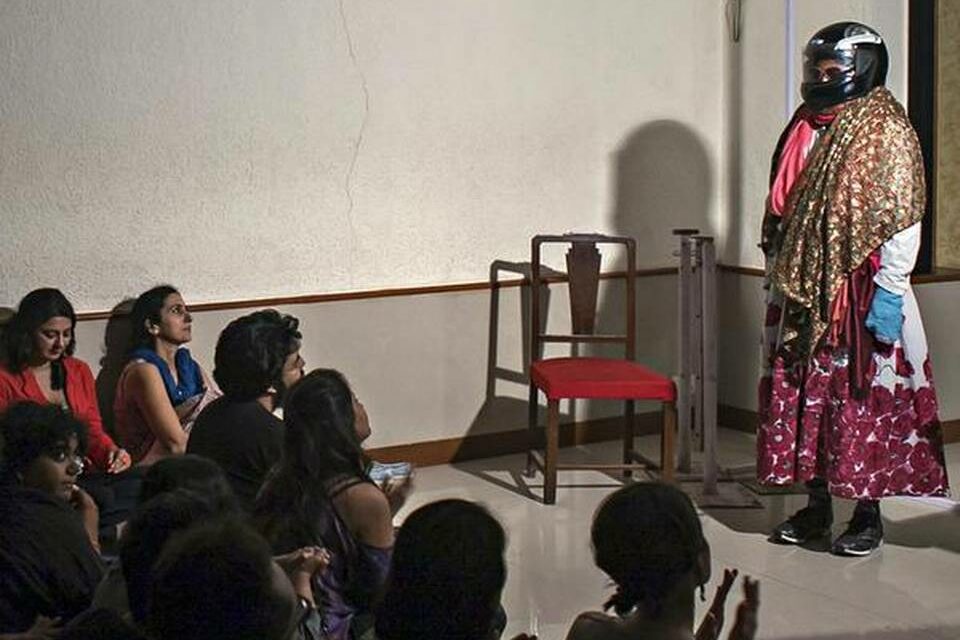 This week’s Girish Karnad tribute at Veda Factory — Hayavadana, reimagined by eight young directors — showed that all is well, theatre-wise, in the Aram Nagar arts microcosm that is constantly in a stage of flux. The Company Theatre presentation featured a frenetic burst of joie de vivre, courtesy its actors, and provided much gravitas to Veda’s wall-to-wall primary colors ethos. It’s nonetheless a refreshingly non-exclusive accessible space where calendars fill up quickly, and revivals of theatre classics perhaps flow too easily – which might indicate that amateur groups are getting braver with the plays they take on.

However, sporadic professional presentations, like Hayavadana, can be a shot in the arm for such aspirational spaces. It must be said that, these days, a steady diet of good theatre can be had even outside bona fide performing arts venues like Prithvi Theatre, the NCPA or even the G5A Foundation.

In the same area, leapfrogging over a temple and a fitness studio, Harkat Studios has moved into a new boutique space, after a longish stint at their previous address. The Museum of Ordinary Objects was a recent show of strength, and the space will probably recover its characteristic arts vibe soon. Their former neighbour, Studio Tamaasha, have quickly re-established themselves in a smaller space in Lokhandwala, on the sixth floor of a partly commercial building, which fortuitously comes with a soirée-friendly barsati. They still serve the best samosas, and as a recent reading of works by Karnad amply demonstrated, its vibe of being a theatre collective in spirit is still very much intact. Because Tamaasha’s office and performance space now share the same walls, the venue is conducive to mostly smaller gigs, but given its proprietors’ predilection for artistic jugaad, one should perhaps not rule out more ambitious outings. A stone’s throw away is the Five Senses Theatre Studio, adjacent to a makeshift mosque whose azaan adds volumes to the cultural palette of such out-of-town plays as Bhagi Hui Ladkiyan and Hero Alom, choices that have placed the self-sufficient if unassuming space on the cultural map.

If one were to move southwards, then a fringe venue gamefully holding fort — quite literally at Fort — is Si Bambai, housed in the upper echelons of an ancient office building whose cramped balcony provides a sprawling (and sparkling, at night) view of the Lion Gate area. One of its recent coups was a virtuosic Koodiyattam performance by the inimitable Sooraj Nambiar.

Its specific traditional markers were well recreated in a less than capacious room that was nonetheless packed to the rafters. A newer star on this constellation, is Artisans’, a studio space in the vicinity that has seen some performances.

Unlike spaces that might draw personality from exhibited works, the Hive at Great Eastern in Byculla, is housed in an art gallery not short on character. It’s replete with textured walls, arched doorways, and a supply of vintage furniture that might double up as a play’s mise en scène — the location houses a cluster of home goods stores. Despite being tucked away, the venue pulls in crowds for a spectrum of works, from the sobering Every Brilliant Thing from QTP Productions, to the Patchworks Ensemble’s high-octane The Gentlemen’s Club. In terms of itinerary, it is yet to steal a march on its busy Bandra cousin, the Cuckoo Club (also a Hive venture), but its ‘found space’ qualities arguably work better for cutting-edge and experimental plays.

Of course, Bandra is where this network of alternative spaces first found its footing, when hubs upon hubs were inaugurated before fizzling out. Apart from Cuckoo, the other hold-out here is the Mumbai Assembly, albeit with a more sporadic arts calendar. However, memories of strong showings, like Avantika Bahl’s Say, What? and Mallika Taneja’s Thoda Dhyan Se, indicate that this is a community hall that needs never to prove its credentials. Last, but not the least, might well be Purandare Hall, on the fifth floor of the Mumbai Marathi Sahitya Sangh at Charni Road. Home to the Drama School Mumbai by day, the space gets transformed into a reasonably equipped black box theatre on certain Saturday evenings.

It’s much harder to get programmed into, as its curators zealously guard the space’s cultural coordinates, but as student offerings go from strength to strength — this year’s DSM production, Sunil Shanbag’s Rakt Kalyan, was well-received, and the valedictory showcase, Aadyant, was eclectically quirky — its position in the cultural calendar definitely cannot be understated.

This article was originally posted on The Hindu on August 2nd, 2019. Read the original article.