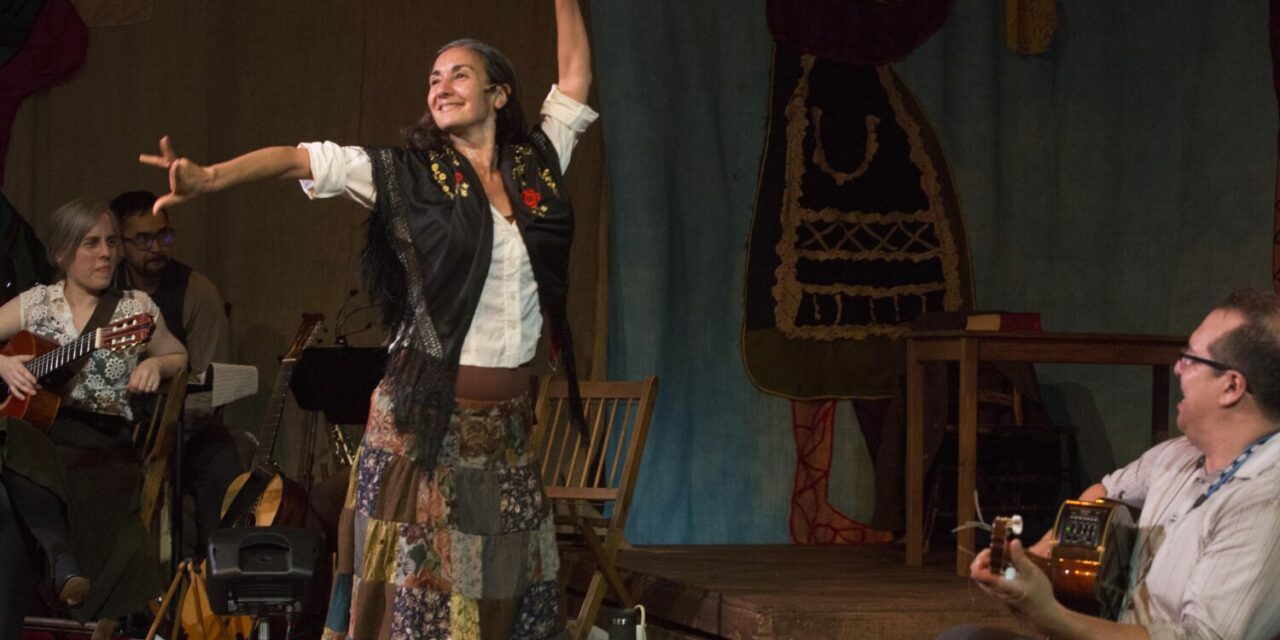 Does the name Violeta Parra ring a bell? If it does, it’s likely because of Joan Baez’s cover of her most famous song, Gracias a la vida. If it doesn’t, well, you’re not alone – her polymathic legacy as a musician, composer, poet, lyricist, folklorist, ethnomusicologist, painter, and textile artist has largely been overshadowed by that of her more famous older brother, the Chilean “anti-poet” Nicanor Parra.

Quantum Theatre’s folk opera Looking for Violeta seeks to redress that overshadowing, through a musical “investigation” into Violeta Parra’s life and art. The investigator is Nicanor (Eugene Perry), who opens the opera in search of his sister Violeta (Carolina Loyola-Garcia) – she seems to have died, although that was a little unclear at the beginning – and who then sets the action rewinding back to their childhood and hopscotching through key episodes of her life up to the moment of her suicide by gunshot.

The action takes place in a festive tent in Frick Park that has a small playing area in front of a multi-level stage of rough-hewn wood that has space for the band as well as the performers. The upstage tent walls are covered in curtains that feature appliquéd figures of musicians and dancers done in a naive, folk-art style; hanging above, and off to the sides, are props and costume pieces ready to be deployed in the show (scenic design is by Tucker Topel; costumes are by Marissa Miskanin). Clearly, we’re in Brechtian storytelling mode here: the design is presentationally theatrical, with no aspirations of creating the illusion that we are anywhere but in a place of showing and telling.

Would that the script was similarly Brechtian and depicted its story with his customary directness and specificity. I’d love to be able to say that I came away from Looking for Violeta with a firm grasp of who Parra was as a person and artist. But writer Maria-José Galleguillos seems to have prioritized meter and rhyme over storytelling; the script is laden with clunky, forced rhymes in the recitatives (“…houses made of tin/ to see them you’ll need a gin”) that get in the way of the narrative clarity such sections ought to provide. You get the broad outline of Parra’s life, but the details that would provide insight into her story are elusive. Moments crash up without sufficient context or build: we see her get into and fall out of, several relationships with men (all played with smoldering intensity by Jerreme Rodriguez), but we aren’t shown why she fell in love with them or why the relationship fell apart. Ditto with her music and art: we see several episodes showing that she has begun working in a new form of art or writing – or has developed a new passion for collecting folk songs – but nothing that clues us into why or how she was inspired to pursue these interests. In short: over and over, we see the result of something in her life without understanding its cause or origin (in one extremely confusing section we even learn that her baby has died, but the previous episodes had included no mention of her having had a child). 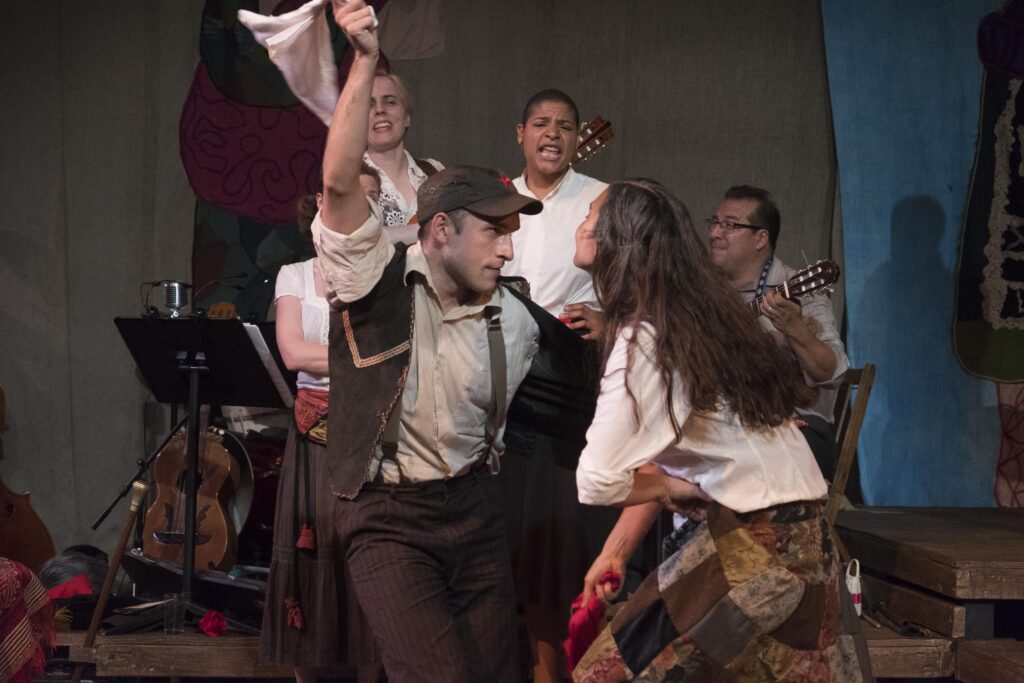 Director Karla Boos provides staging and scene titles to fill in the gaps in the narrative, but these efforts, too, are often more poetic and imagistic than narratively clear. For example, late in the play, there’s a scene in which Violeta dances violently with one of the men in her life – there’s drama here, but what is it meant to represent? domestic abuse? a fight? a seduction? This dance is followed by her dropping suddenly to the floor, and we’re told (via song) that she has attempted suicide. How the dance (or the event it metaphorically represents) prompted the suicide attempt is unexplained. Equally mystifying is an earlier scene in which she seems to force one of her boyfriends to learn to play her music by repeatedly abusing and humiliating him – who he is, and why he must keep practicing the flute, and why she keeps throwing her shoe at him, are all unspecified. The fact that members of the ensemble (in addition to Rodriguez, supporting parts are played by Kelsey Robinson, Raquel Winnica Young, and Emily Pinkerton) play multiple roles doesn’t help: although scene titles establish waypoints in her life (“The People’s Music”; “Fame”), information about character identity is often buried in song lyrics that fly by too fast to fully grok, and the bits of costumes actors don and doff merely indicate that they have changed character, without making clear who the new character is.

Where Looking for Violeta shines is in its showcasing of South American and Latinx music through the work of composer/musician Emily Pinkerton. Her score is a mix of traditional South American melodies and original compositions, with styles ranging from Chilean folk music to flamenco to mariachi to Andean flute melodies, and it features prominently the twenty-five string guitarrón and the lute-like charango, two instruments rarely heard outside of South America (and both of which Pinkerton plays with gorgeous technique). The band – Jon Bañuelos on guitar, Erik Lawrence on winds, Jose Layo Puentes on acoustic bass, and Ryan Socrates on percussion – captures the style and mood of her complex rhythms and melodies with effortless fluidity (music direction is by Daniel Nesta Curtis).

While Looking for Violeta didn’t really deliver on its promise to bring Parra’s life and work into focus, it did have the salubrious effect of piquing my curiosity – there were enough tantalizing hints about Parra’s accomplishments to send me down a nice little rabbit hole of internet research over the last couple of days. She really was an amazing, multi-talented, and extraordinarily complicated human being, and definitely worthy of an artistic homage. There’s good potential in this folk opera, but for the time being, audiences would be wise to bone up on her story ahead of time to get the most out of its fractured storytelling.

This article was originally posted in The Pittsburgh Tatler on 9 August 2019, and has been reposted with permission. 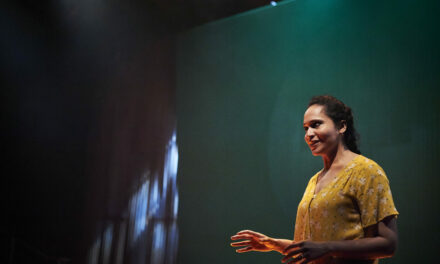 “We Are Among Us” at City Theatre, Pittsburgh, PA, USA