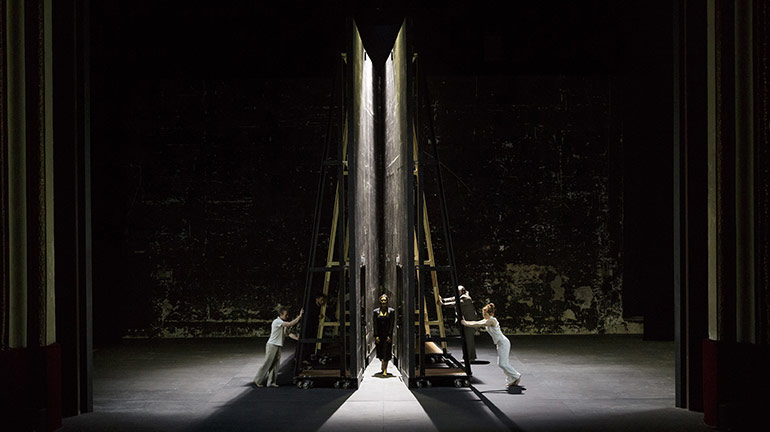 The Pittsburgh International Festival of Firsts finished in a blaze of glory this past week with two final theatrical performances – Androcles and the Lion by the Danish Teatret Gruppe 38 and Carte Blanche, and Espæce, by French choreographer/scenographer Aurélien Bory and his Compagnie 111. 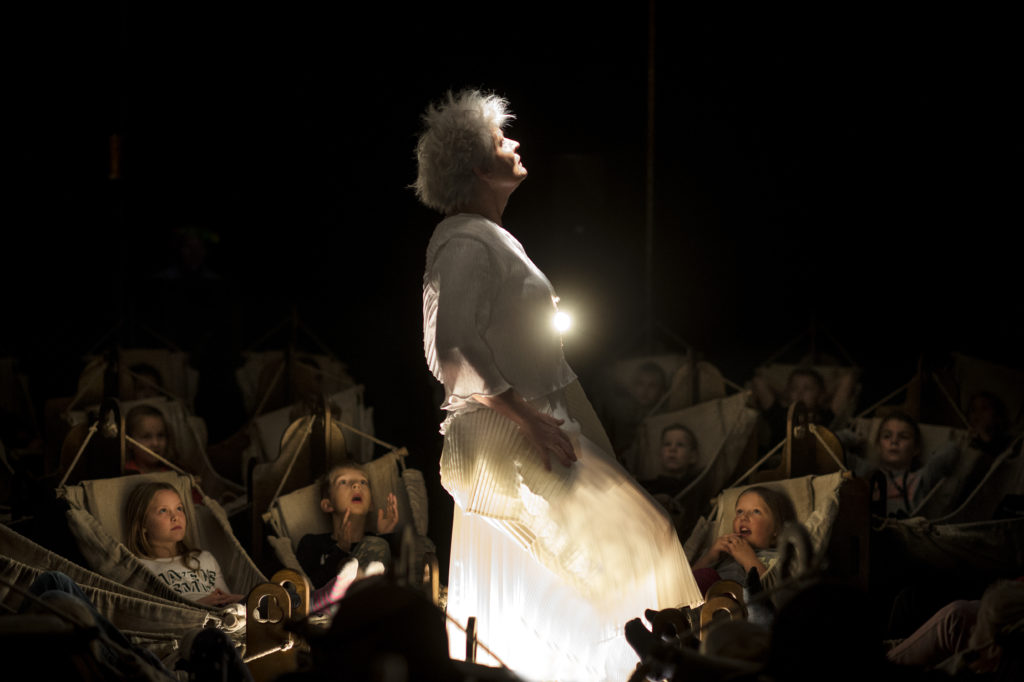 Androcles and the Lion – which has one more day of the performance – is children’s theater that is equally enchanting for adults. Audience members recline in hammocks arranged in concentric circles around a central platform; above is a white cloth hung like the ceiling of a circus tent. Before the performance begins, space is filled with calming sounds of chimes, birds, bells, dripping water – it’s a soothing atmosphere, made to feel charmingly otherworldly by the presence of men wearing baskets on their heads filled with glowing orbs of fruit. As actress Bodil Alling draws us into the familiar fable of Androcles and the Lion, the orb-wearing men station themselves at old-fashioned overhead projectors and use water, colored glass, patterns, stencils, and other objects to illustrate scenes from the story on the tent above. Sound effects – produced on equally low-tech devices – fill out the aural landscape. The combination of Alling’s low, lilting voice and the handcrafted media and sound design produces a captivating effect, one that I imagine is as appealing to real children as it was to the child in me.  I could have lain there for hours, being swept along in the slipstream of this troupe’s beguiling storytelling. 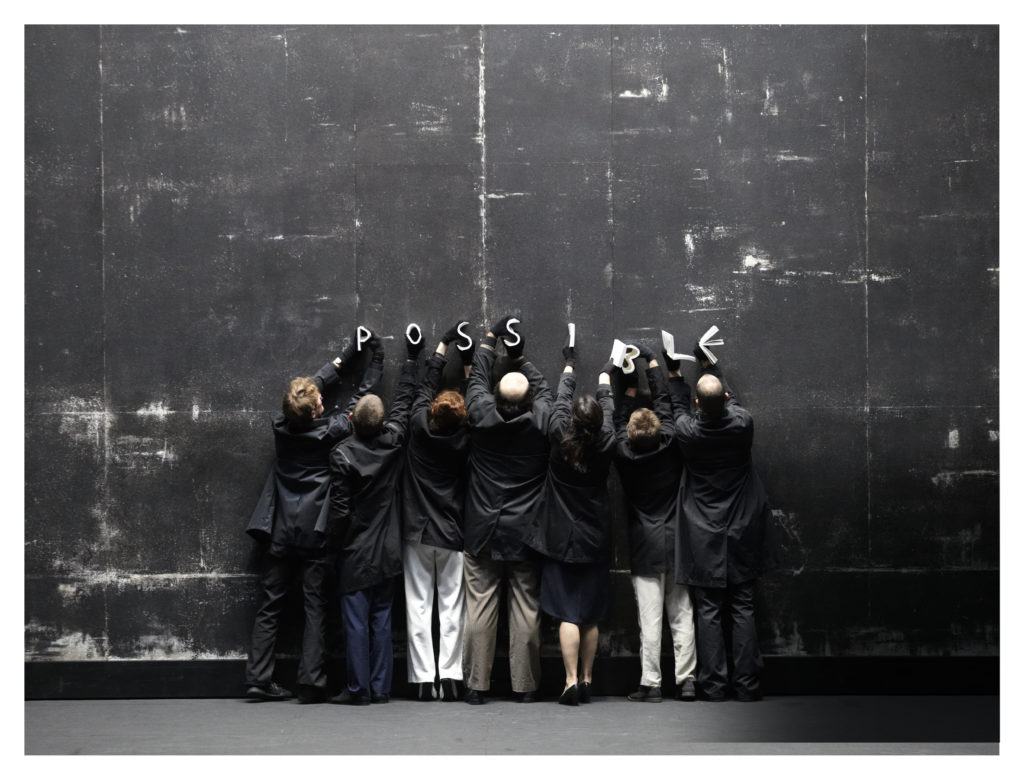 Espæce – which ran, alas, for just two days – joins In the Tunnel  at the top of my list of favorites from this year’s Festival. The title, which is a made-up word that combines the French words for “species” and “space,” stems from a novel by Georges Perec, Espèces d’Espaces (Species of Spaces)–which Bory describes as a work that “writes space” and explores what is around and inside “emptiness.” Taking inspiration from Perec, Bory’s mesmerizing and utterly magical production explores the inner and outer contours of “emptiness” through movement, music, sound, and an ingeniously engineered scenographic element.

The performance begins with a line of performers in front of what turns out to be a deceptively monolithic large dark gray wall. An instruction is projected above them: “Read.” They pull books out of their pockets and begin to form words by bending and folding the books into letters against the wall, eventually forming the sentence, “To live is to pass from one space to another while doing your very best not to bump yourself ” – a quote from Perec. What then follows is a series of choreographic explorations of “passing from one space to another”: the production as a whole is built, kind of like a symphony, of smaller movements, each of which has its own rhythm, tempo, mood, and tone, and which together form a whole that transcends the parts. Or maybe a better metaphor would be a necklace made of unique and beautifully crafted beads, each one topping the last in exquisite craft, forming a piece of jewelry that defies wholistic description. You’ve probably guessed where this is heading – I’m not even going to be able to begin to give you a sense of the whole of this production, not only because its whole is hard to compass in words, but also because there were so many revelatory, gasp-worthy moments that I was reluctant to tear my eyes from the stage to take notes (!).

Central to Espæce’s theatrical wizardry is that huge wall. It looms dully upstage during the first movement, in which three performers begin a slow back and forth journey hanging from swaying pipes, creating a complicated and hypnotizing pattern of movement through the space. Then soprano Claire Lefilliâtre begins singing a haunting, gorgeous Schubert Lied and the enormous wall suddenly begins to move, at first seeming to tilt back and forth, as if in response to an earthquake, and then rumbling forward to swallow up the performers one by one like a gigantic steamroller. Stéphane Ley’s cunning sound design rumbles and echoes to produce an illusion of weight and menace in the wall; the performers’ meticulously timed and placed movement creates the effect that the wall is tilting on edge or flattening them to the floor. And as the piece transitions from this movement into the next, the wall becomes not just a scenic element but an integral component of the choreography – it begins to fold and move, shaping not only the space but also the human performers’ kinetic interaction with each other and with their surroundings. 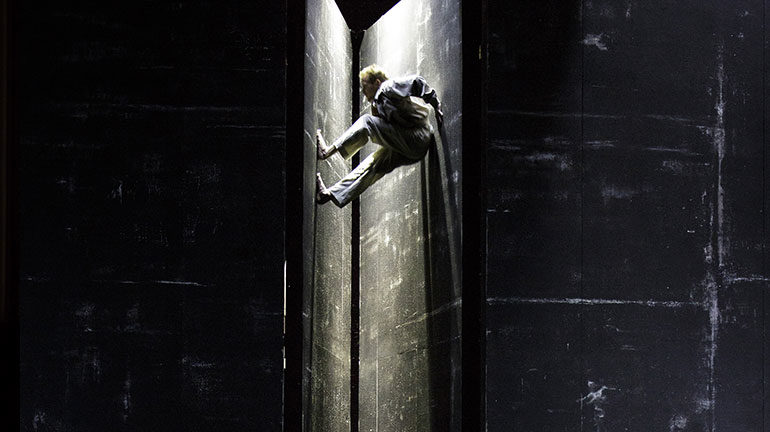 The wall morphs and changes unceasingly, revealing new aspects of itself with each new “bead” on that necklace; meanwhile, the performers find their way in, through, between, up, and over the wall’s ever-reconfiguring facets. At one point, the choreographic action pauses for an extended mimed story, told by actor Olivier Martin-Salvan in gibberish-German, about a young boy whose mother sends him by train to safety during wartime; at other points, dancer Cochise Le Berre and contortionist Katell Le Brenn each engage in impressive physical lazzi while reading their books, and acrobat Guilhem Benoit shimmies up the wall with gravity-defying ease. Then the wall comes back to life, spinning, snaking, winding–often seemingly of its own accord, thanks to Arno Veyrat’s adroit lighting design, which keeps the technicians hidden in shadow – until finally it disappears, leaving behind a photosensitive screen on which the final images and messages of the performance are projected using light and shadow.

Espæce was one of those revelatory theatrical experiences that bust open the possibilities of what can be done in live performance and demonstrate why the International Festival of Firsts is such a gift to the city’s artists and audiences – every four years or so we have the opportunity to be inspired and challenged by creative genius from around the world. Congratulations and kudos are due to curator Karla Boos and the Pittsburgh Cultural Trust for having pulled together such a marvelous slate of performances, events, and installations.

And in case you missed it, here’s a little teaser of Espæce to make you wish you hadn’t:

This article was originally posted in The Pittsburgh Tatler on November 10, 2018, and has been reposted with permission.