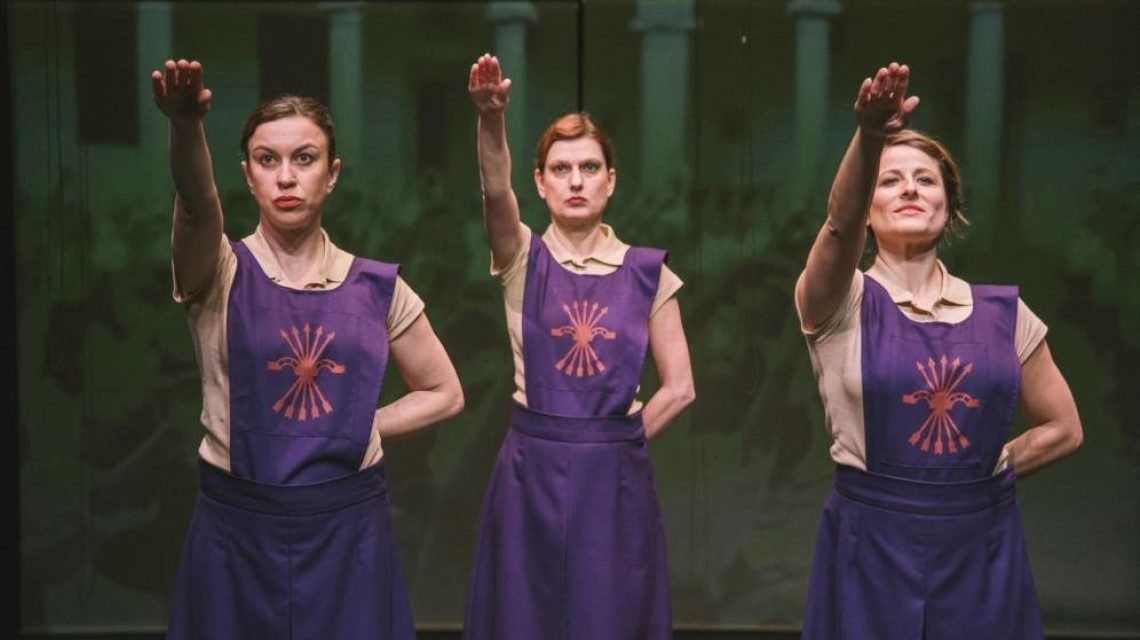 La Sección recovers the figure of three women to draw a robot sketch of the submission, obedience and indoctrination of Francoism and to make us reflect on how things have changed.

“Conceal your physical presence at work. Women are like little ants, graceful and kind.” This is what Pilar Primo de Rivera —founder of the Women Section of the Spanish Falange (Franco´s political party) — said to the women of her time.

On stage, three of those “little ants”: hard workers in their fashion, patriots in their fashion and above all, submissive. These women — Pilar Primo de Rivera, Mercedes Sanz-Bachiller, and Carmen Polo — inhabiting the dark times of Francoism, strived scrupulously and collaborated selflessly with the dictatorship that kept Spain in the gutter of progress for almost forty years. They are the three characters of La Sección, a play that has been showing at the Teatro del Barrio during March and April.

Using these three female figures, La Sección documents Spanish history from 1935 to Juan Carlos de Borbón’s oath as King in 1975.  The play, which contains wonderful moments of parody and sharp criticism, attempts to vindicate the position of women even in that context of Francoist ostracism. I wonder if the authors of the play read Carmen Domingo’s book Bedchamber’s Conversations, which portrays precisely the same three women.

In La Sección, women appear as an undeniable testimony of the silence they have always been relegated to – from any housewife to the very wife of the caudillo.  Women were powerful tools the fascist power used to reinforce its leitmotiv: “Home, homeland, and Empire.”  Women’s ability to give birth made them an instrument to produce children that the regime could lead to fight and die.

These three women, who held representative positions, were after all faithful servants of a regime whose ideas about women’s role were submission, subordination and obedience. As much as La Sección’s character of Pilar Primo de Rivera wants to reveal herself as a feminist — particularly, in the dialogue between Carmen Polo and Mercedes Sanz-Bachiller — we understand perfectly that her ideas about feminism and syndicalism are very far from resembling those developed by other powerful women, such as Victoria Kent, María Zambrano o Dolores Ibarruri.

La Sección forces us to reflect — with great pleasure — on the Spanish saying «de aquellos polvos, estos lodos» (something like “from that dust comes this mud”) and makes us think about the kind of women – heavily indoctrinated – that picked up the baton of that historical moment and entered a new democratic Spain anxious to shake off forty years of mud. One wonders how many women have carried that huge and enormous boulder of Sisyphus that is a shame, submission and repression, and how many of them still carry it today.

On the Teatro del Barrio’s stage, La Sección —written by Ruth Sánchez González and Jessica Belda and performed with great talent by Jessica Belda, Manuela Rodríguez, and Natalie Pinot— is well bound and well executed from beginning to end. 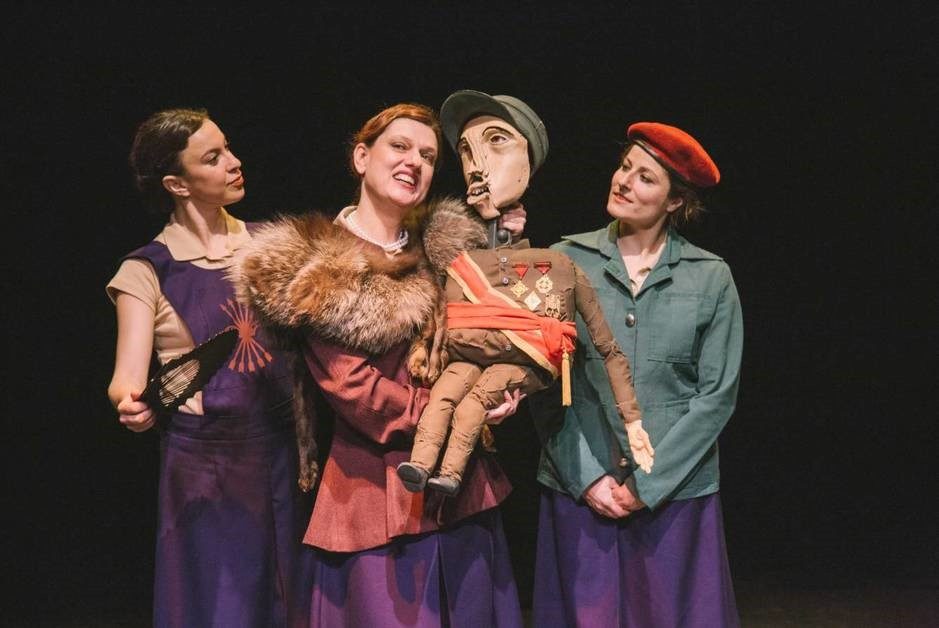 Manuela Rodríguez, Natalie Pinot, and Jessica Belda with a puppet of Franco in La Sección. Courtesy of Moon Magazine.

There is time for criticism, for historic rigor, for satire, for laughter—don’t miss the techno version of the «cara el sol» (the anthem of the Falange)—  or even to contain emotions – the episode recreating the letter that the Catalan widower of a red (republican) sent to Pilar Primo de Rivera, or the harrowing moment near the end of the play when a number count leaves the audience without breath.

Everything that happens on stage has a meaning and is perfectly achieved– from the initial scene in which the three women welcome the audience dressed like three youngsters out of a Francoist program of social help, to the wonderful graphic elements by Elías Taño, to the puppet of Franco built by Carla Protozoo and Juanfran Jacinto.

Teamwork and Carla Chillida’s direction make the miracle happen in this play where all the elements work together harmoniously and vibrantly. We are thankful that Teatro del Barrio brings us closer to productions like La Sección: theatre that is necessary and brave, theatre as activism that can turn heads and bite the historical memory of a country. La Sección is showing in the same space as the play Emilia — about the exemplary figure of Emilia Pardo Bazán. Therefore, I want to finish this review with two quotes, by two very different women. One by Emilia Pardo Bazán:

Women education cannot be called education, but taming, for its purpose is obedience, passivity and submission.

And another one by Pilar Primo de Rivera:

Women never discover anything; they lack, of course, creative talent, which is reserved by God to male intelligences. The only thing we can do is interpret, better or worse, what men give us already created.

One of them died in 1921, more than ten years before the dictatorship started in this country. The other one would pronounce her sentence in Spain in 1942, twenty-one years later. We welcome theatre that considers these women and presents them to us, the viewers.

This article was originally published in Moon Magazine. Translated and published by permission of the author. Read the original article, in Spanish, here. 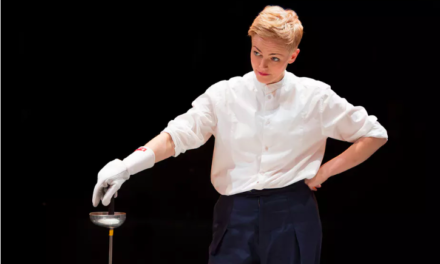