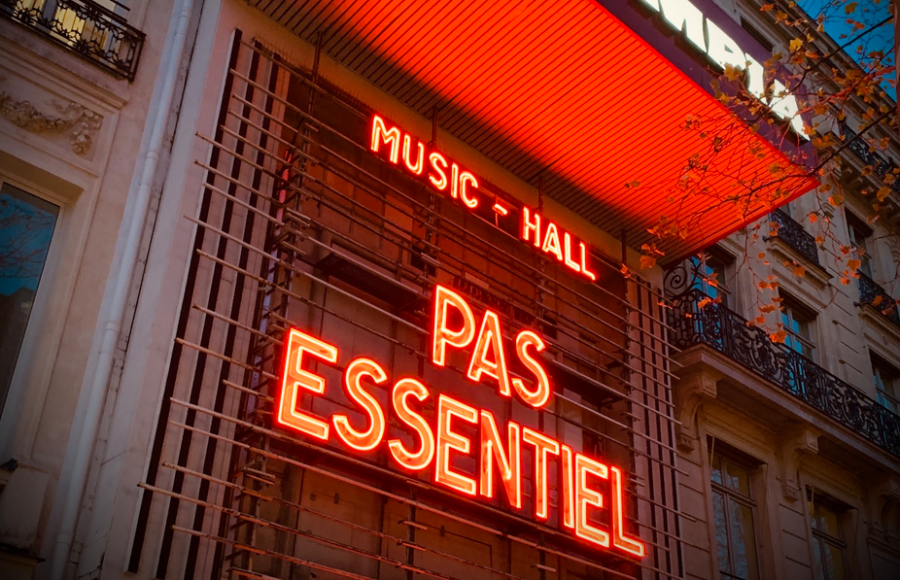 On December 8, 2020, Paris’s Olympia Theatre protested that cultural venues were seen as “not essential” by the government. Philippe Dufreigne/Twitter

In France, the cultural sector receives significant public, private and governmental support. This is no surprise, it is the home of the “cultural exception”, the conviction that culture isn’t simply a commodity that can be subject to the unrestrained pressure of the marketplace and free trade.

Despite this long-held and often-exclaimed position, during the ongoing Covid-19 pandemic the French government has been criticized for making choices that run counter to the idea of the “cultural exception”. Indeed, support has been strongest for economic sectors, while culture has been behind. This sector is now down spiraling into artistic, economic and symbolic chaos – it has been rendered powerless.

Culture: forsaken by the state

The French government’s first misstep took place during the first lockdown, March to May 2020.

While professionals from the cultural sector received financial assistance as part of the country’s stimulus package, including extended unemployment benefits, cultural venues themselves – the actual hands-on places where the public experiences art – were forced to close. This included museums, libraries, theatres, concert halls, cinemas, bookstores, festivals, and even monuments and film shoots, and the list goes on.

The second misstep took place in late October 2020. As the second lockdown drew to a close, President Emmanuel Macron announced a new set of stimulus measures and at the same time redefined what would be considered “essential” and “nonessential” based on criteria that were both unclear and contradictory. Shockingly, the activities of the culture sector were judged “nonessential”. France’s entire cultural sector felt forsaken, especially when bookstores were forced to close their doors in November.

The third misstep occurred when, against all odds, the government announced that all cultural venues would remain closed until December 10. And this despite the fact that the holiday season was one of the most important for French culture events, and that professionals had made immense efforts to be able to reopen with reinforced health protocols.

Today in France, with the exception of bookstores and art galleries – they’re considered shops and were thus allowed to reopen – culture remains off-limits, with doors closed and no visibility on the future. While businesses, public transport, and shopping centers were crowded hubs of contagion and remained open, it was cultural venues that were forced to close.

This was the drop of water that caused the vase to overflow, as the saying goes in French. France’s cultural sector, feeling that it was being dismissed by the government, released a range of demands, petitions and pleas to the public. The live-performance industry brought a suit before the State Council, which ruled in favour of the government.

Opposition to the government’s policy grew and public protests broke out on December 15. Actors, theatre and film professionals and critics expressed their disappointment, anger, and desperation. Former culture ministers expressed their support, and more demonstrations bloomed. Then the protests went national.

Minister of Culture Roselyne Bachelot, an outspoken champion for the sector, was left powerless after being excluded from the decision-making group of ministers. “Now, it is more effective to be defended by the Minister of Economy,” observed film producer Nathanaël Karmitz.

To many, the government’s arguments seemed nonsensical. Unlike shopping centers and other commercial spaces, theatres, cinemas, museums, and libraries were committed to establishing and enforcing strict health protocols, which would have made them undoubtedly the safest public places.

Despite financial support through part-time jobs and on-demand support measures – iconic of the French welfare model – the most vulnerable cultural professionals struggled, and for small independent companies, bankruptcy loomed. Galleries, theatres, nonprofit groups, and movie houses closed. Festivals were canceled and actors lost social-security assistance due to lack of contracts. Many other professionals, low-income workers, art-school students, and others suffered.

On top of this, the lack of bilateral communication with the government hindered the strategic planning of cultural venues. As of February 2021, there is still no date for reopening cultural spaces in France and no indication when one might be. On March 3, government spokesman Gabriel Attal expressed hope that there could be a “return to normal life” by mid-April, but there was no clear definition of what this might mean, especially for the cultural sector.

Many artists have expressed their disagreement, such as the poet and performer Grand Corps Malade or the company NDJC, which made a video, “Pas essential” (not essential). In it, the group dances in front of many of Paris’s closed cultural venues in red bonnets that symbolize the French Republic.

The social and symbolic argument is without a question the most controversial. If “culture is France”, then where has culture been during this whole crisis? Not just its economic impact – 2.3% of the country’s GDP, without counting the large indirect impact on other creative industries such as tourism and luxury – but also its social, anthropological, psychological, and philosophical worth. All are excluded from the French government’s calculations.

The French government’s definition of what is “essential” and “nonessential” shows a deep misunderstanding of what postmodern consumer societies truly are. This is particularly disturbing in the era of Emmanuel Macron when France is proclaimed to be a “start-up nation”.

To protest against this distortion between opening shops and closing cultural venues, in December 2020 cellist Gautier Capuçon improvised a “concert in a supermarket”.

The government’s purely economic viewpoint, which looks only at transactional or functional logics, ignores the teachings of Jean Baudrillard. In his writings, Baudrillard established a theory of consumer culture, presenting consumption as the mirror of daily life throughout time. “To consume is to exist socially,” said Baudrillard.

According to Floch’s perspective, consumption is the building block of one’s identity, reflecting social belonging and many existential, critical, and playful values. In other words, consumption and culture are woven together – consumerism is thus culture, and culture is indeed an object of consumption. The French government is applying an outdated understanding of the “hierarchy of needs” pyramid proposed by Abraham Maslow in 1943. Maslow later acknowledged the inadequacy of his thesis, in particular our deep-seated need for both transcendence and aesthetics.

France’s first lockdown witnessed the birth of the “home culture”, but also allowed US cultural industries to tighten their hold and further cemented globalization. The competition was already fierce between the virtual and in-person culture – even though both are for the most part complementary. Tragically, the government’s ham-handed attempts to manage the Covid-19 crisis crushed the country’s live cultural venues.

Naturally, online platforms providing paid programming, such as Netflix, have exploited the crisis to further develop their market dominance. They’re the big winners, not culture in France.

By shutting down cultural venues and keeping them closed, the French government has deemed aesthetic transcendence to be nonessential and limited culture to only its most commercial forms. Nonprofit culture professionals are striving to adapt to this new era by going virtual, but they lack the deep pockets of the digital giants.

The inversion of the “cultural exception”

While culture in France remains the most heavily supported sector by the government, the crisis has led to professionals in the sector to highlight this inversion of the cultural exception. Destroying culture for the sake of public health and economics is absurd, particularly knowing that culture is deeply embedded within both.

France’s identity is built on its culture. It’s a mark of equality, the glue that binds the French nation together, and of its excellence. Other governments, more enlightened, have shown that cultural venues are indeed essential. France must do the same.

This article was originally posted in The Conversation on March 4, 2021, and has been reposted with permission. To read the original article, click here.

This post was written by Anne Gombault and Nacima Ourahmoune.