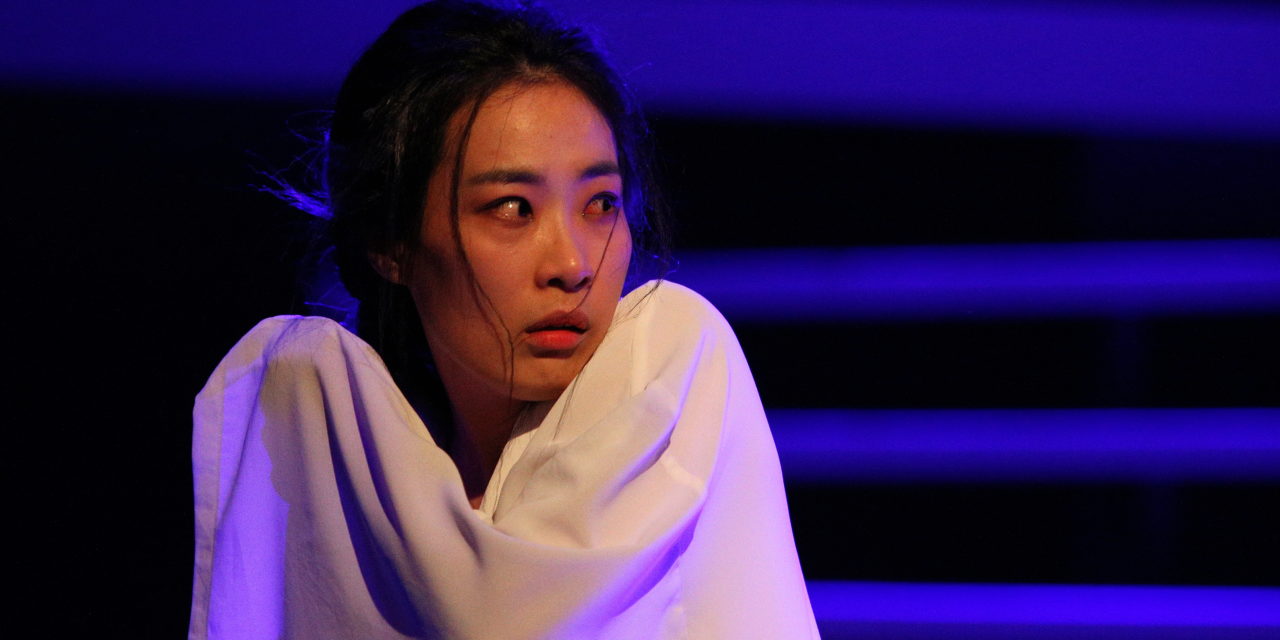 Tae-sook Han’s 2016 production of Lady Macbeth, a Changgeuk (Korean traditional opera), successfully premiered at the National Gugak Center in Korea. In fact, this is about the tenth time since 1998 that Han’s adaptation of this Shakespearean tragedy has come alive on stage both in and out of Korea, except that the 2016 production has a little more Korean flavor to it – Lady Macbeth sings chang, traditional Korean narrative ballad. With a slightly different cast and a group of musicians joining them on stage, this new musical production focused around the sick and guilt-ridden Lady Macbeth, whose psychotherapy sessions with the Royal Doctor reveal hidden desires, heinous crimes and a guilty conscience. Hypnotized by the Doctor, Lady Macbeth falls into a trance-like recollection in which she reenacts the treacherous murder scene of King Duncan. We follow through Lady Macbeth’s unconsciousness, going back and forth between past and present, a process during which the Doctor at one point turns into Macbeth himself and his attendants into the three witches. 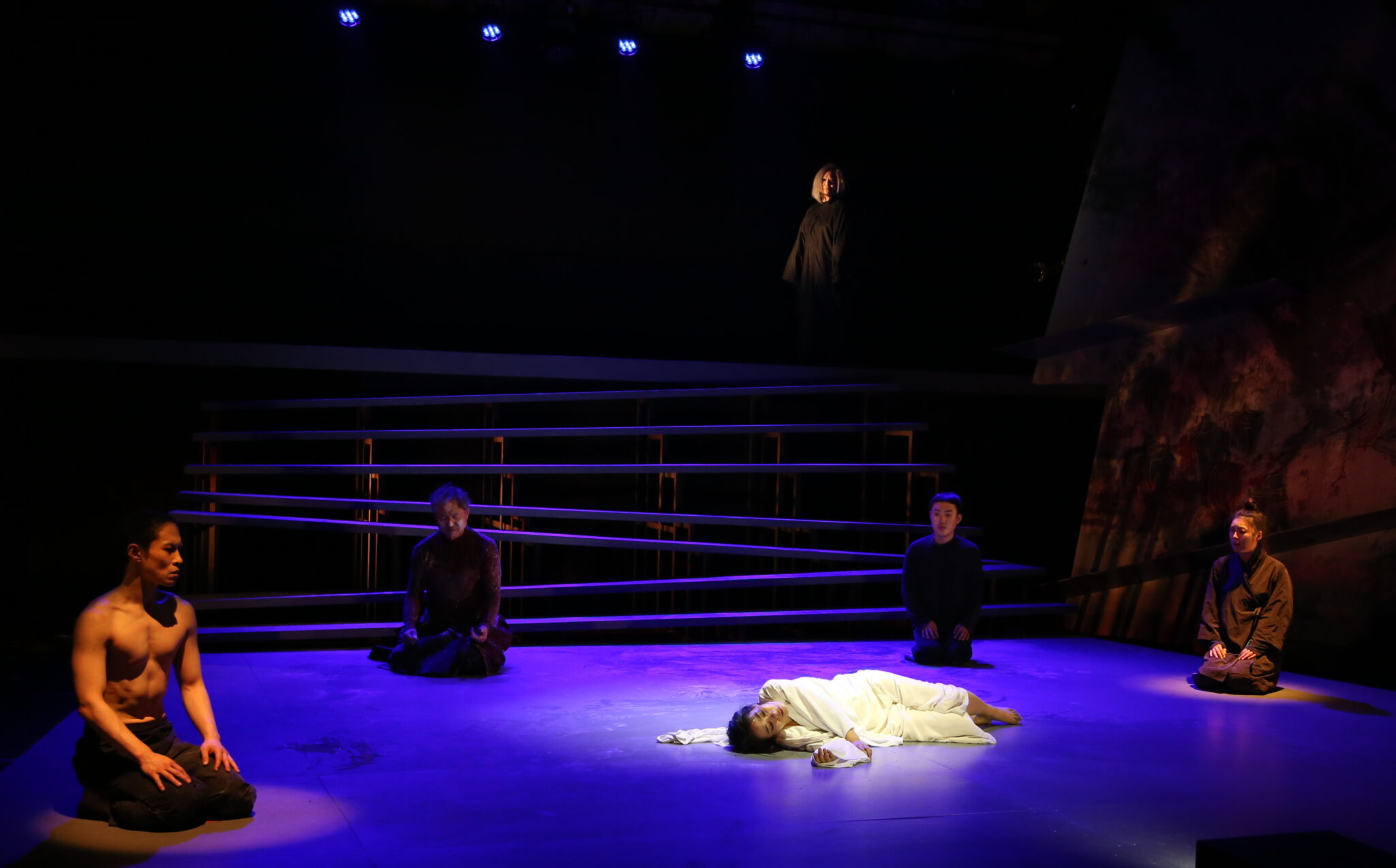 Tae-sook Han has long been a key figure in the Korean theatre. For more than thirty years since her debut in 1977 with the play Dutchman, she has been constantly producing plays for the domestic and international audience. The following are excerpts from the interview:

How did you first approach the text?

Way back in the 80s, I had a chance to direct Macbeth in an all girls’ school. While I watched these girls acting out the various roles in the play, I thought that the power inherent in the character of Lady Macbeth was immense and that her mentality and desire were key forces driving the tragedy, giving it life force. She was this extraordinary woman filled with desire, lust for power, sexuality and ambition and I was determined to write a play about this woman. I usually like to change the power dynamics when I’m reinterpreting Shakespeare’s texts and highlighting different characters. When I was directing Iago and Othello, I focused more on the character of Iago and in order to portray the darker side of his nature, I had this ‘Black Dog’ follow him around throughout the whole play. He didn’t speak but he would just stand there by Iago’s side, naked, and he would at times use his bodily movements to invite us into Iago’s mentality. So in this production, I definitely tried to give Lady Macbeth the spotlight. 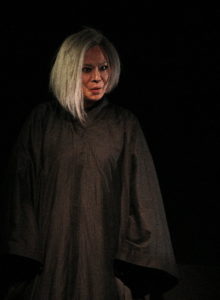 What are some of the differences made in this 2016 production of Lady Macbeth, a Changgeuk?

Of course, there’s the music. We have a great team from the National Gugak Center, a small cross-cultural orchestra that consists of traditional Korean instruments like the Gayageum (Korean zither), Piri (Korean oboe), percussions, but also a contrabass. I would say that a Changgeuk is most like an opera in terms of form, but personally, I find chang more attractive because there is such a smooth flow between music and dialogue. So when it comes to delivering Lady Macbeth’s different layers of emotion, and the emotional intensity of her lines, I think there’s nothing better than chang. Then there’s a new character in the production, who is called Dochang. Dochangs play an important role in most traditional Korean Changgeuks as narrators and intermediaries between audience and performers. In Lady Macbeth, the opening lines are sung by her and all the other important lines like the witches’ “Fair is Foul and Foul is Fair” speech and Macbeth’s “Life’s but a walking shadow” soliloquy are also delivered through her chang. Sometimes she acts as a commentator, distancing herself away from the characters, but sometimes she becomes a character herself as part of the play. She also chimes in with various sound effects like the cawing of a crow or the galloping of a horse. I think she gave the audience a bit of a laugh doing that.

You are also known for your distinctive stage aesthetics. How do you visually approach the plays you direct?

I think of Lady Macbeth as ‘Object Theatre,’ which uses everyday objects on stage as engaging material and as reflections of the characters’ emotions and states of mind. The great thing about Objects in plays lies in their ability to evoke the senses. They can become metonymies of characters and places. They can act as tropes that embody abstract ideas like power, desire and isolation. I think that theatre should be a sensual experience. I want to give the audience an experience that evokes all their sensory organs so that even the blind or the deaf will be able to enjoy the show and be fully aware of its dynamics. In this production, we had a mixture of flour, charcoal and a bit of water. Using it, two of the attendants were drawing King Duncan’s distorted face on the great, tilted wall behind, all the while as the hypnotized Lady Macbeth retold and reenacted the murder scene. We also had these attendants towards the end of play hit themselves with flour, making disturbing sounds. 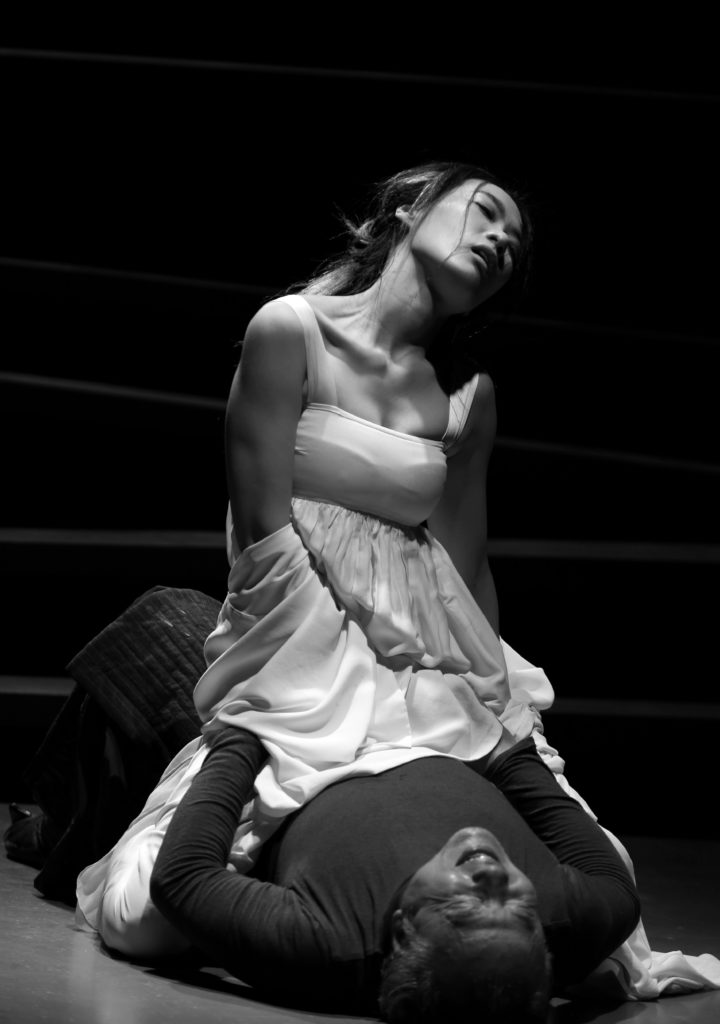 I get the feeling – and this is something that other people share as well- that many of your works are dark. Death, isolation and pain are some of the recurrent themes in your plays. I’m curious to know how you work around these themes.

Well, I personally think I have no sense of humor and perhaps this is why I’m always more drawn to tragic worlds than comic ones. But yes, my works tend to be very dark and bleak because I like to explore and dig up what’s underneath our innermost selves. I hope to give the audience a cathartic cure by laying bare the darker sides of human nature, whether it be desires, sin or madness. Usually, these abstractions are given shape through scenography, stage space and like I mentioned, through Objects. They are embodied through the massive, slanted walls, the holes made on the floor and the carved out statues made of clay.

Do you have any upcoming productions you are working on?

Yes, currently Death of a Salesman is rerunning in the Seoul Arts Center. Also, I’m doing a children’s play, The Story of a Mother written by Hans Anderson. I am having a tough time working on this because the play is about death and it isn’t easy trying to deliver death to 7-year-olds. It should be done with candour but also with caution. I am also very excited about the upcoming production of Headlong’s 1984 I will be directing this October. It’s something new I’m taking on so hopefully, I will have a lot of fun. A busy year. 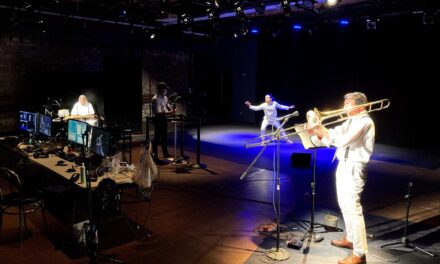