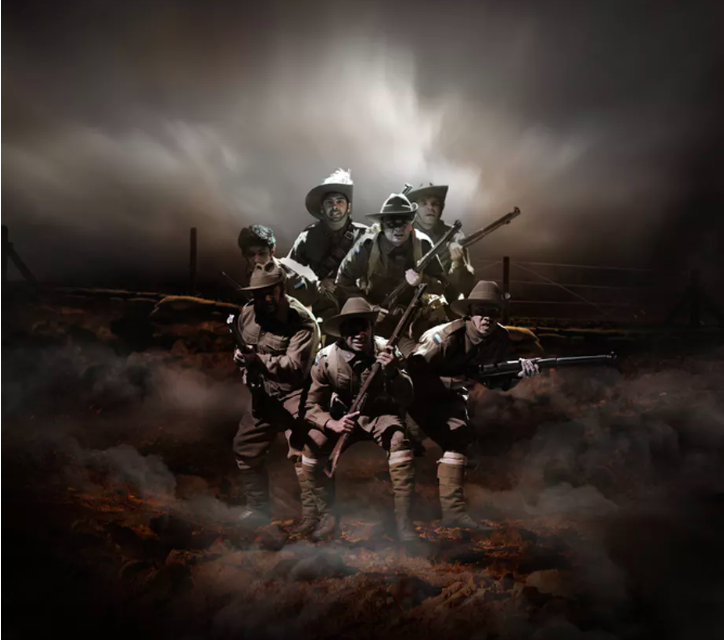 The performance space in which Wesley Enoch‘s play Black Diggers is being performed at the Brisbane Festival is a large black box. It features a raised stage in the middle which proves versatile for battlegrounds at home and abroad–and later as ground for discriminatory encounters experienced by Aboriginal returned ex-servicemen.

The fire-filled 44-gallon drum off to the side creates another space of encounter; there are few other props. Now and then, dates and other details are whitewashed on the black walls.

As the show unfolds, the ensemble adds layers to these painted stories. Actor and ex-serviceman George Bostock, a recognizable elder statesman in the Aboriginal world, methodically shines a pair of shoes as the younger men range around. It’s a gentle opening to a story of stark extremes that remembers the Aboriginal men who served the British Commonwealth in the first world war, overcoming barriers to enlist, experiencing typical hardships of battle, and returning changed to a nation that hadn’t.

Well-funded to coincide with Australia’s 100 Years of Anzac commemorations, Black Diggers has the main stage and dominant discourse to work with. It also has the challenge of working against entrenched mythology that preserves sacrifice and nation-building as white virtues. Telling the story of 100 years in a hundred minutes is an enormous task – complicated further when the play rewinds to the 19th century to illuminate effects of land battles fought on this continent’s soil.

Cue the cry of a baby that has survived a settler massacre. If the cry is to humanize and give “voice” to innocent flesh and bone it achieves its goal. One settler wants to bludgeon to death this “remnant” of a forever-disrupted Aboriginal world, another wants to simply “leave it for the dogs”. The “Professor” appears, asserts his authority and, perhaps motivated by scientific curiosity, saves the “picaninny” and goes on to raise him as his own.

In a later scene, actor Luke Carroll convinces us he is that baby. Old enough for language, but not yet old enough to understand, he asks what happened to his parents. Awkwardness ensues. The “baby” knows enough to feel something bad has been done to his parents and anxiously cries out: “Were they frightened?”

We have been warned, of course, that this is no straightforward Anzac re-telling replete with khaki-swaddled jingoisms and jaunty slouch hats. Black Diggers enters the contemporary battle of ideas armed with the research it needs. After all, getting creative with national mythology is dangerous business.

The story moves from our frontier to those of the first world war. In the trenches, the diggers’ banter shows strong camaraderie and palpable fear. Bombs hail down nearby — the sound and light symphony not unlike that of a tropical thunderstorm.

The lighting design is exceptional throughout. Several scenes of direct action are foregrounded: hand-to-hand combat leads to death. The close-range shooting of four German soldiers is accompanied by a throwaway line confirming that one of the four was in the process of pulling out a weapon. We are thus encouraged to accept these killings as morally justified.

Occasionally Black Diggers tells us what is happening rather than showing us – but this is perhaps inevitable given the gaps in our mainstream and shared history knowledge bases. The exposition gives voice to the research, often in the form of monologues.

This includes an early geopolitical take on the countries and events leading to the first world war styled in the Horrible Histories genre. Facts are delivered fast–and later we watch a spotlit serviceman holding his glass and speaking through raw emotion of his experience at war and his return home. In perhaps the most controversial line of the play, he implores: “I am Australian”.

Enoch’s direction doesn’t leave anyone behind. The ensemble is strong and each member appears to make each other stronger. Carroll is a standout, so too is David Page. All are versatile. The actors change character and identities – from black to white to south Asian and back again; they are aged as infants, teens, young adults, middle-aged, and geriatric. There’s even a case of gender change effected through the donning of an apron and cardigan, as well as acting informed by a young man who may have had a mum and aunties to draw inspiration from.

The all-male ensemble, largely costumed in khaki, avoids an over-played machismo. There is a sensitivity and empathy here alongside the accouterment and collateral of war: these are real men with real emotions with real thoughts and real challenges and relationships.

Through Black Diggers, Enoch and his creative team do what Australia’s best-paid minds can’t — bring black and white Australia into the one narrative with some plausibility while not resiling from what has been euphemistically called “blemishes on our history.”

Being Australian may not be a goal of all Indigenous Peoples in Australia, but recognizing and atoning for the brutality of our colonial histories is perhaps one way for our Peoples to think the nation can begin to know us and our stories.

This post originally appeared on The Conversation on September 28, 2014, and has been reposted with permission.