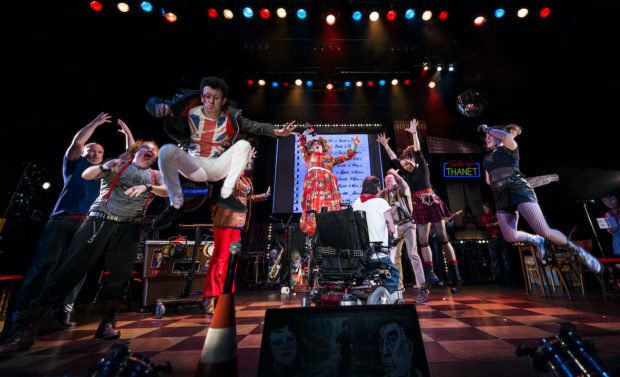 If any musical can attempt to live up to this title in these troubled times, it must be this show from Graeae, a theatre company whose mission is to champion the work of Deaf and disabled artists. Founded in 1980, its name alludes to the three sisters of Greek myth who shared one eye and one tooth between them, and since 1997 Jenny Sealey MBE has been its artistic director, and the company has embraced both plays about different kinds of disability and given new resonance to other work, such as revivals of classics.

Graeae’s shows are always captioned and signed, which as well as being inclusive also gives its performances an additional theatricality: there is always a lot going on visually. Casting actors with a disability can be a plus: the company’s revival of Sarah Kane’s notorious Blastedbenefitted from the fact that the bodies of the actors conveyed the drama’s key theme of the physical costs of war. Other work, such as Jack Thorne’s 2016 love story, The Solid Life of Sugar Water, felt more tender because it starred Genevieve Barr (deaf) and Arthur Hughes (radial dysplasia). In cases like this, the negative connotations of the word “disability” are radically subverted and actors with a variety of conditions make a unique and mind-changing contribution to a play’s meaning.

To date, the company’s most successful show has been the musical Reasons to be Cheerful, raucous raunch inspired by punk rocker Ian Dury, who died in 2000, and his band The Blockheads. It first toured in 2010, then in 2012, when it was a one-off gig at the London Paralympics opening ceremony, and the show was revived again in 2017 when this performance at London’s Theatre Royal Stratford East was videoed. Given that Dury contracted polio at age seven and overcame the resulting paralysis to achieve pop stardom, Graeae’s show is both a fitting tribute and a good fit in terms of the company’s mission. The diverse cast lends full-blown energy to the show, with the tribute band — led by lead vocalist John Kelly — vigorously evoking the spirit of 1970s punkdom.

Part-gig, part-play, Paul Sirett’s musical is a coming-of-age tale set in 1981 in the Red Lion pub, Southend, where Cockney punk narrator Vinnie and his friends, including Colin the anarchist and singer Janine, re-enact the summer night in 1979 when, despite stealing some tickets from Janine’s odious boyfriend Dave, they failed to get to a Dury concert at the Odeon Hammersmith. At the same time, there’s a subplot about Bobby and Pat, Vinnie’s parents, and the question of what do with caring for sick relatives. As directed by Sealey, and brightly designed by Liz Ashcroft, the show has plenty of visual appeals and warmhearted bounce, but it has to be admitted that today the punk era no longer feels quite as angry or as outta control as it did at the time.

In fact, the representation not only of punk culture but also of working-class life in Reasons To Be Cheerful is not unproblematic. Some of this comes from the subject matter: for example, Dury’s “England’s Glory” was once an assertion of an alternative national identity, but today feels extremely traditional. Despite the 1970s rhythms of ska and reggae, much of punk was a determinedly white face. And it’s all so hetero-normal. Likewise, the politics of the play are crudely anti-Tory and its vision of British workers is oddly unrealistic. Actually, much of the play feels like a nostalgically simplistic revisiting of 1970s working-class culture, full of anti-Thatcher gibes and Essex clichés. At the same time, the coronavirus pandemic gives added resonance to Bobby’s illness and his family’s concerns, while the jovial toilet roll scene has acquired an accidental topicality following the panic-buying spree of March this year.

If this filmed version by David Grant and Ed Sunman can’t quite capture the joy of a live gig, especially as the storytelling of this jukebox musical is rather slow and predictable, there are a couple of stand-out moments of thumping, hip-grinding fun. “Spasticus Autisticus”, the Dury song which was banned by the BBC in 1981, but performed at the 2012 Paralympics opening, is one such, as is the delightful “Wake Up and Make Love with Me”. The three classics — the title song, “Sex & Drugs & Rock & Roll” and “Hit Me with Your Rhythm Stick” — likewise deliver some good cheer. Dury’s tribute to Gene Vincent, “Crippled with Nerves” is another highlight. One kung-fu sequence acted out to a kazoo melody, is great fun.

At their best, Kelly’s vocals have a melancholic inflection which feels just right, while the main actors — Stephen Lloyd (Vinnie), Stephen Collins (Colin), Beth Hinton-Lever (Janine), Karen Spicer (Pat), Gerald McDermott (Bobby) and Max Runham (Dave) — turn in thoroughly committed, and often upliftingly comic, performances. The band — comprising writer Sirett, Nixon Rosembert and Paula Faircloth — thump out the tunes. Louis Schultz-Wiremu’s sax sounds cool, while, in a cast that often doubles, Jude Mahon plays Debbie as well as signing. Boisterous, affirmative, singalong friendly if occasionally tiresome, this is a great show for anyone who misses either the old days of punk or the party atmosphere of the tribute gig.

Reasons To Be Cheerful is on the Graeae website until 3 August.

This article first appeared on The Arts Desk.  It has been reposted with permission from www.sierz.co.uk . 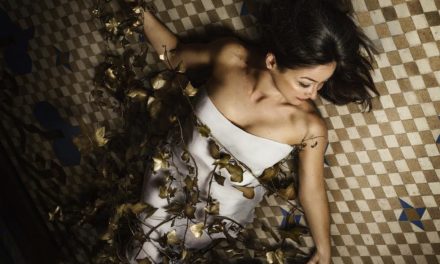