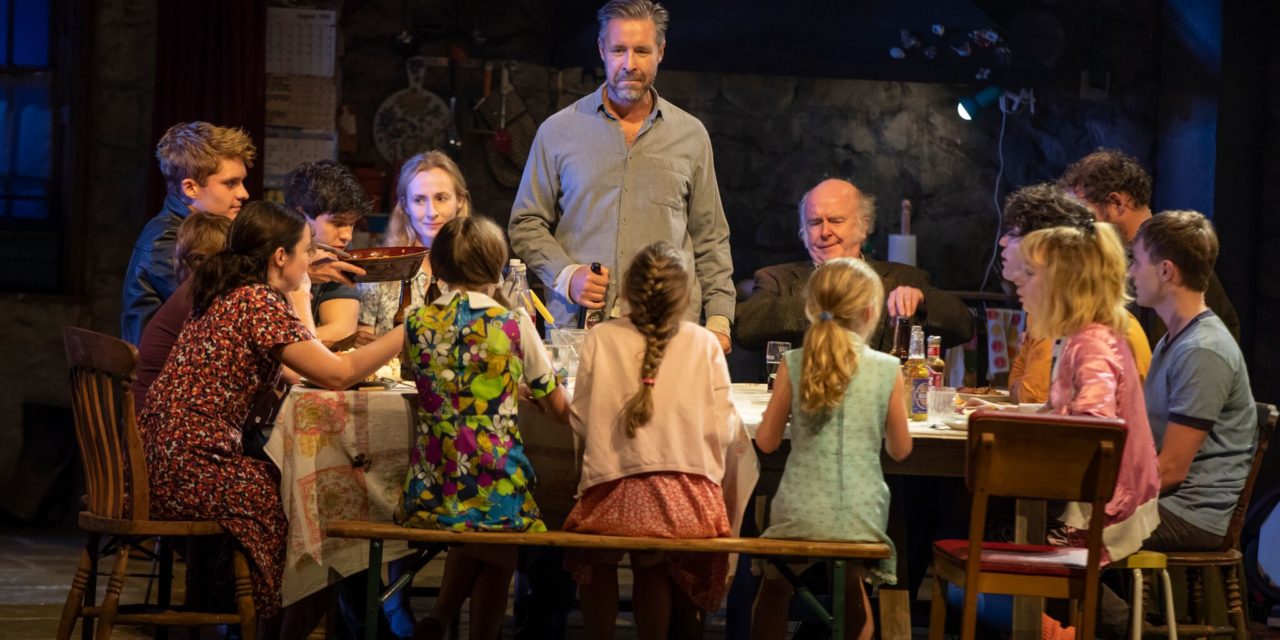 Pay close attention and you’ll find that The Ferryman is washed in the holy waters of classic literature.

Macbeth and the Eleusinian Mysteries, Virgil and Sir Walter Raleigh, Sophocles and Yeats are all near, like ancestral ghosts who lie just beyond the hill crest and wait in anticipation of fate. They charge, electrify even, the warm harvest air of the Carney family farmhouse, somewhere on the edge of the wood in County Armagh where the grassy hills of Lough Neagh give way to the rolling, drumlin flatlands of Northern Ireland, because Jez Butterworth’s The Ferryman is itself an epic of classic proportion.

Inside the Carney home, a picture of exuberant warmth and chaos, lives a father, a mother, a sister-in-law, a nephew, two sons, four daughters, a newborn baby boy, two great-aunts, one great-uncle, two or three bunnies and one wild goose. Sometimes the Rolling Stones play on the boombox — give me a little drink from your loving cup — or — there’s just no place for a street fighting man, no, Get down — and whiskey is always pouring. The walls are covered, ceiling to floor, in crayon drawings and finger paintings, the cupboards stuffed with books and board games. It’s harvest time and the energy of a passing summer combusts in an ancient celebration of bread and life. Persephone has brought a crop, Dionysus promises a festival and Demeter cries as autumn approaches.

But, beyond the guises of harvest festivity, more sinister fates are at work. Holy vows have been broken. Betrayals and tragic sin done. Promises not made, innocent slain and wars unwon. The fog approaches and the wails of shrieking banshees, grieving the unburied, grow stronger.

Set in 1981 while the IRA’s paramilitary campaign raged across Northern Ireland, The Ferryman is a story of one family caught in the crosshairs of this historic struggle, faced with decisions of Sophoclean proportion. At what cost do we bury our dead, The Ferryman asks? And when will fate pay us visit if we fail to do our duty?

Butterworth’s story centers on Caitlin Carney (Laura Donnelly), who, after the disappearance of her husband Seamus, is forced to live with her son, Oisin (Rob Malone), in the family home of her brother-in-law, Quinn Carney (Paddy Considine). Ten years later, when Seamus’ body is uncovered in a bog not far from the Carney household, Quinn and his family are brought again into a struggle they’d fought hard to avoid. Outside, suspicion stirs around Seamus’ untimely death and the Republican fight for Irish freedom bears down on the family with the weight of historic bloodshed, with the guilt of a crumbling Irish ancestry knocking at the door.

The war giveth and the war taketh away, Brecht told us.

Shepherded by director Sam Mendes from a highly-acclaimed West End run, The Ferryman is a Greek tragedy, its historical theater of Shakespearean proportion; in breadth and story, it’s operatic. It stings with Butterworth’s (Jerusalem) characteristically smart, cracking comedy and hails from the stage with an ambition to not just forge some mammoth piece of theater (The Ferryman is three and a half hours long; though energetic and with gripping speed, you wouldn’t know it), but to weave an intricate, mystical story that reads like canon literature.

It’s true that Butterworth’s script would fall without the enormous talent of this 21-person cast, all of whom have traveled from London to open the show on Broadway. As Quinn Carney, Paddy Considine (Peaky Blinders) is a valiant leading man, vulnerable and guarded, plagued with the burden of fate. Laura Donnelly (Outlander) is the very embodiment of grief, of love and loss; her portrayal shows us the true cost of war. And as Aunt Maggie Far Away, Fionnula Flanagan, confined for most of the show to silence in a wheelchair, lost somewhere in the abyss of dementia, is a spine-chilling seer, a mystic oracle who delivers the most powerful moments of this show.

The play’s title comes from book six of The Aeneid, from the ferryman Charon who carries the souls of the dead across the rivers Styx. Those who cannot pay the ferryman’s fee or whose bodies remain unburied, the myth goes, are left to wander the shores of the river for eternity, to wade between earth and Hades. Of the many haunting questions this triumph of a play leaves for its audiences, the most chilling are those of this role.

Within the sanctity of our families and homes — those sacred places bound to tradition and allegiance, worship and sacrament —  who will be the ferryman, Butterworth asks? Who among us is tasked to bury the dead, charged to ferry and carry our ancestry? Find them and ask them, The Ferryman implores: will you steer us down the right river? 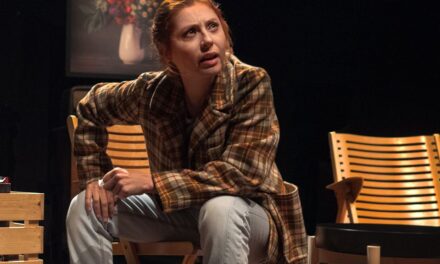