If You Were To Do Tadeusz Różewicz’s “The Card Index”… 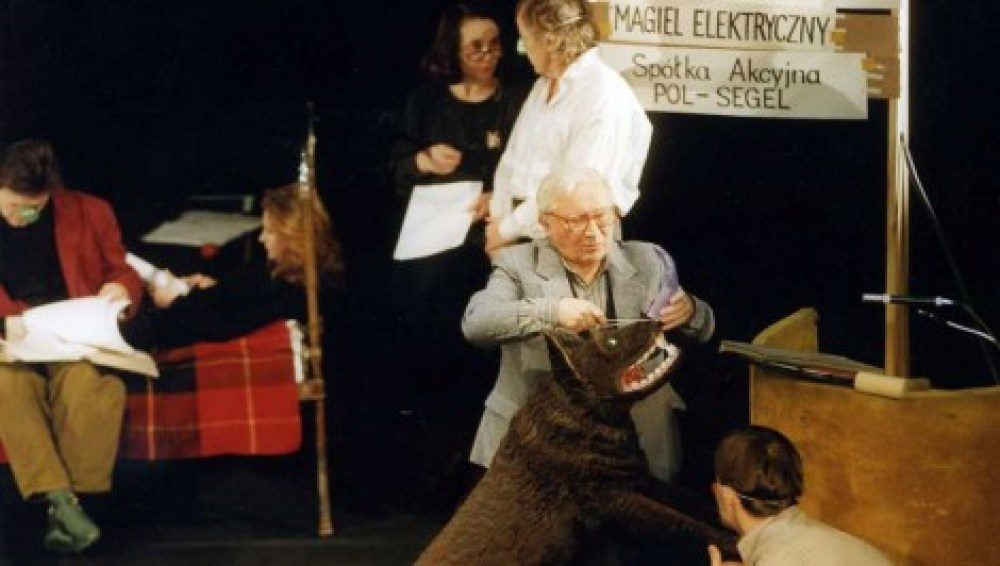 “I do not believe in our production…,” Tadeusz Różewicz wrote in a letter to Konrad Swinarski in late December 1966. His low spirits were sunken still by the news that Swinarski hadn’t begun rehearsing. Two years had passed since the two authors had begun their talks about producing The Card Index on TV. Several weeks later the work commenced.

The poet first came into contact with Swinarski in March 1965, when the latter was directing The Card Index at Zavit Theatre in Tel-Aviv with a cast who, as his wife Barbara put it, “had little to do with theatre except for inclinations.” The premiere was held on April 19, and turned out to be quite a success. The director had been trying in vain to have his play staged by the Television Theatre for a number of years. The difficulties did not come to him as a surprise. “Everyone, including such celebrities as Mr. Axer and Mr. Dejmek, are very keen on directing it… only something always stands in the way.” The text Swinarski had worked with was one of three existing versions (apart from the manuscript) and the one which appealed to Różewicz most. The poet wished to define the small but significant differences in the texts and make some amendments. He also decided to offer various interpretative cues: “The Card Index protagonist–sounds rather bored as if he doesn’t feel like talking…a bit amused…but above all ill-disposed to the play and himself and amused (…) If you were to direct The Card Index, please keep that in mind. Did you know that the protagonist was originally supposed to say only three words? He didn’t want to participate in this show.”

“Only three words…”–Silence is one of the bigger themes of Różewicz’s work, recurrent in his poems and dramas. One of his unwritten plays is about the imprisoned Walerian Łukasiński and his “forty-year-long silence.” Różewicz’s “silence is intrinsic to experiencing the truth: the question about the expressible-ness of human experience and about the shape of life,” commented Grzegorz Niziołek.

From the very beginning, Swinarski saw Tadeusz Łomnicki in the role of the Protagonist. They knew each other from university, where they both studied theatre direction (Konrad was a year lower), and then from Teatr Współczesny (Contemporary Theatre). On May 31, 1967, a short while before the June broadcast of The Card Index, the director visited Zbigniew Raszewski. Among other things, they discussed the best Polish actors of the middle generation. “Swinarski rates Łomnicki the highest,” the professor noted in his diary.

The television Card Index was almost unanimously regarded as a big event–its direction seen as outstanding and Łomnicki’s role hailed as a great creation. The additional outdoor footage also provoked a fair amount of positive comments (even though the TV Theatre was defined by “the aesthetics of a single room.”) The scenes show rundown tenements in Grzybowska Street–in the background, the Palace of Culture, All Saints Church and Nożyk Synagogue –today the area is the location of a housing estate. Nearby stretches Marszałkowska Street (where, according to Jan Kott, the Protagonist’s bed could stand.) With its proximity to the city center, the location enjoyed a great number of passers-by. Even the director–the man waving at the Girl in the window.

However, Swinarski’s television achievements didn’t strike a chord with contemporary critics. Even the sectional articles didn’t mention The Card Index, instead focusing on his theatrical struggles with the classics. They sometimes asked why the director didn’t stage modern plays. “That love is gone,” he’d say–what was left was his fascination with Różewicz, “with what he has written and what he will write.” The Card Index remains Poland’s best contemporary play, although according to Swinarski, it is now historical, “but I think that it is possible to keep on writing it. If Różewicz dared to write the final scene about what happened to the main character, the operetta director, after 1970, then The Card Index would become a contemporary play. It is written in beautiful language, it contains both literary culture and tradition, it is both sensual and political. It possesses everything that I value in a drama, but it simply lacks a continuation.”

The author himself desired the opposite: “Ever since 1960, I have been waiting for the director to create new scenes by introducing strangers who would engage in random conversations. That moment hasn’t come yet.” In the end, Różewicz decided to get up on the stage himself and work on The Card Index Scattered–to assemble it anew, and examine the permanence of its structure. “The rehearsal is still going on.” In 2002 the poet said, “Now, I could enter into the new Third Card Index with you.”

Zbigniew Majchrowski briefly and poignantly described the connections between The Card Index and Mickiewicz’s Forefathers’ Eve as “our short improvisation.” In his unceasing work on this play, Tadeusz Różewicz seems to follow in the footsteps of his literary icons. Mickiewicz went back to his Forefathers’ Eve after over a decade. Goethe was writing Faust for sixty years. Similarly, The Card Index has been fifty years in the making, still without a beginning or ending, reopened and closed over and over again. As if in exchange for all the promised, unwritten pieces.

This post originally appeared on Biweekly.pl in June 2011 and has been reposted with permission.