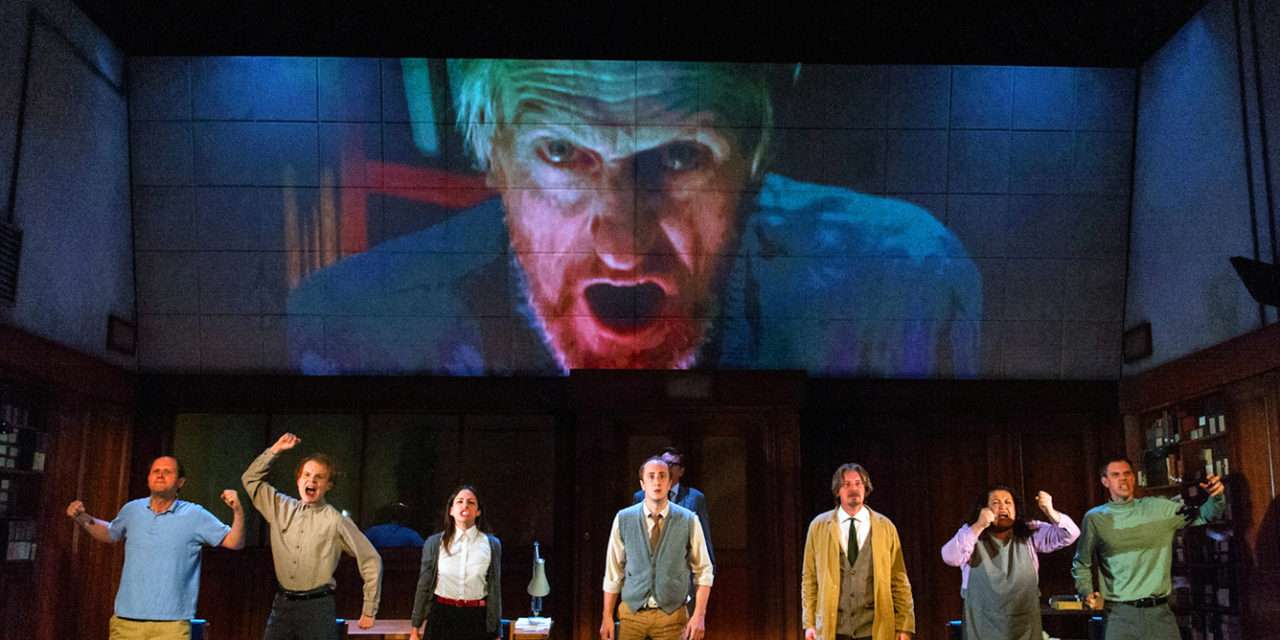 Orwell’s novel 1984 is currently a bestseller in the U.S.  We can soon expect many theatrical adaptations of the novel. Most recently, Headlong Theatre’s adaptation of 1984, which closed on 29 October, 2016, seemed ahead of its times.

Headlong’a 1984 is competent, skillful and clever. It’s easy to watch and has a pleasant aesthetic that relies on post-war design and long-forgotten standards drifting through the soundscape to generate a sense of comfortable nostalgia.

But the production is burdened by the weight of its forebear.

It employs stagey narrative devices sparsely but authoritatively; an on-stage book-club reading of Orwell’s 1984 is a particularly egregious example of the show’s foregrounding of its bulkiest aspect – the source text.

1984, of course, is a heavily laden text, which turned its author’s name into a byword for authoritarian nightmare. Its politics, while tuned for the threat of a different villain at a different time, ring eerily true today.

Of course, this is evidence more of the systemic persistence of the structures of power than any prescience on the part of original author.

Headlong – which began life in the UK in 1974 as The Oxford Stage Company – has specialised in adaptation, and its work is highly regarded. The company is also responsible for developing works by Lucy Prebble, including The Effect and Enron.

But with 1984 the dramaturgical logic of the production is overburdened. From the first intoning church bell that opens the production, it never escapes its inheritance and becomes a kind of parody of the original.

Our knowing laughter at famously telling lines from the book reveals that, as an audience, we are all Big Brother, watching. It also foregrounds the fact that, in modern times, we each are Big Brother to one another. Through social media we willingly, actively participate in total surveillance culture.

Instead of the ominous shadows Orwell casts over his world, the absurdity of “our” world is perhaps more evocative of Beckett.

And this despite the fact that, as the production itself reminds us, the “never ending war”, “Emmanuel Goldstein” and the “terrorist brotherhood” all really do exist in their own mediated way today.

It’s worth noting that Headlong’s use of media problematizes the role of the female protagonist Julia (Janine Harouni) in interesting ways. At first the use of video screens on stage appears as another unavoidable image. Naturally the world is dominated by the screen – it’s 1984.

The same holds true in our world too, through a proliferation of thousands of little screens as opposed to the lowering big screen that, in Headlong’s handling, has replaced the sky, making the overloaded dramaturgy particularly apparent.

A screen on stage means something different from a screen in a novel or a screen on a screen for that matter – the screen’s “liveness”, in a stage context, is thrown immediately into question.

Until its introduction, everything we’ve seen happen on stage has actually happened; the physical bodies of the actors are present in the room with us, no matter how far away. But when they leave the stage and appear “elsewhere” on the screen, our lived experience of them is severed.

But two crucial moments of Julia’s interaction with the cameras fundamentally alter her character by introducing potentially new information. When male protagonist Winston (Matthew Spencer) leaves the room for the first time, and Julia is left alone with a snow globe, she moves into the view of a specific camera at a deliberate angle, and then quickly moves out of it again to place the snow globe in view of another camera at another specific angle.

If she knows where the cameras are, the implication is that Julia is Thought Police after all, as Winston first suspected. But the force of the original text overwhelms this possibility and reasserts itself in the final scene, as Julia and Winston confess their failures to one another.

An argument could be made that neither this production, nor Orwell, ever show us what actually happened to Julia. So we can’t really know what to believe.

Ultimately Headlong’s 1984 rests on a fairly antiquated notion of truth and the authenticity of the individual and so reaffirms the cultural assumptions of the audience. It thereby serves to strengthen that which it purports to warn us against: the erasure of dissent.

The argument it lays out, about a book that changes you forever as soon as you read it, disappears in an infinite regression of self-referentiality. We are Big Brother. We are the dead.

Is any staged production of 1984 doomed to bear the same burden?

Certainly, the dogmas of the past are still insistently present here in Headlong’s attempt but, before it begins, because we already know how it ends, it feels as though an urgent warning to the post-war “proles” has been co-opted as slightly smug satire for the inner party.

Robert Reid, Lecturer in Theatre, Victorian College of the Arts, University of Melbourne