Writing about non verbal communication in his book Beaux Gestes; A Guide to French Body Talk, the formidable Laurence Wiley states that

“Words do not convey meaning so much as the tone of voice, the use of silence, the tension of the body, the expression of the face, the rhythm of our movements, our use of space, our gestures … We communicate not only with our voices but our entire bodies and the space around them.”

I was thinking about this during my yearly stay at the Avignon Festival in July. Once more the subject of supertitles was on my mind.  Outside by Kirill Serebrennikov, a play in Russian, Jana Svobodova’s and Wen Hui’s Ordinary People in Czech and Chinese, and Rimini Protokoll’s Granma. Les Trombones de la Havane (mostly in Spanish) presented the usual challenges of following the plot and keeping up with the characters with the help of supertitles. Once more, a fully satisfying experience of such wonderfully different shows seemed unattainable. The most challenging show of all in this respect was Lao She’s Tea House from Beijing, directed by Meng Jinghui. Three hours in Chinese with a cast of nineteen playing a variety of roles was a test for the most valiant among us. The thought of trying to follow supertitles in the midst of this complex tale of three generations of a Chinese family was frightening. The body language of multiple characters was clearly not going to help our understanding of what was being said especially since the performers from the Meng Theatre Studio were rarely still. Who can forget the performer who managed to stay on the set’s giant wheel as it turned, jumping from one slippery metal spoke to another without falling?

Fortunately for some of us, there were smart glasses or augmented reality glasses, made available at some of the festival shows by PANTHEA, a network of surtitle experts that creates supertitles in various languages for live performance.  Based in Berlin and Paris, PANTHEA has become the official partner of the Avignon Festival for these special glasses that offer audiences the opportunity to enjoy a show in a foreign language without straining to follow the supertitles above or on the sides of the action.  Instead supertitles are displayed on the lenses during the performance so that you can concentrate more on what is happening on the stage rather than reading supertitles .

As a translator of contemporary American plays into French and creator of supertitles, I wanted to know more about these glasses.  I met with Ilja Fontaine, head of development at PANTHEA in Berlin to better understand how these innovative glasses work.  He was very helpful and I appreciated his taking the time to explain to a neophyte like myself how these glasses help audiences have a better experience of a show in a language they do not know. He and his colleagues came to Avignon with sixty pairs of smart glasses (thirty of their own and thirty given to them by Epson, the manufacturer of their glasses). These could be rented for ten euros a pair (about twelve dollars) to interested parties at four of the festival shows.

I was excited to try them out.  At first they seem cumbersome especially if you wear prescription glasses, which can fit under the AR glasses.  Once you get over their strangeness, however, you quickly learn to adjust them to reduce or increase the brightness, change the color, change languages, or increase or decrease the size of the text thanks to a manageable hand held touch pad with arrows indicating the choices. The initial awkwardness soon disappears and you can settle back to enjoy the show.

The translated texts are only visible to your line of sight so that you do not disturb your neighbors. Not only are they easy to read, but it becomes clear that the dialogue of the original play has been distilled so that the audience is not constantly reading. As Ilja says: “We do not want to overwhelm people with text.  The purpose is to appreciate the acting.”

At one point during this extraordinary performance one of the actors improvised a scene. The question of improvisation came up in my conversation with Ilja.  How does the supertitle operator deal with this? I wondered.  Ilja explained that he or she knows in advance what is happening and is typing in real time.  As a supertitle translator who has been an operator as well, this blew my mind.  Hats off to whoever takes on this job.

One of the advantages of these smart glasses is that theatergoers who might skip an important production because it is in a foreign language will now want to attend more theater from abroad.  This past summer, for example, a group of  American Presenters invited to the festival by the French Cultural Services in New York City, were able to attend Pascal Rambert’s Architecture, a four-hour production in the Pope’s Palace Honor Court thanks to PANTHEA’s smart glasses. Ilja told me that In 2017, Caroline Quiela Nguyen’s Saigon was programmed in other festivals thanks to the glasses worn by producers who otherwise might not have attended the show. Studies show that audiences have increased in theaters that have tried them out.

PANTHEA is  a young company that is well aware of what improvements that need to be made to these fascinating glasses. They are heavy on the nose and a bit  cumbersome to wear for three or four hours, for example. And they are still quite expensive to produce not to mention that translation for the supertitles is costly as well. They are already at work to solve these and other current problems, but as a translator interested in finding ways to enhance the experience of plays in other languages, I am delighted to have been introduced to PANTHEA’s smart glasses thanks to Ilja Fontaine. 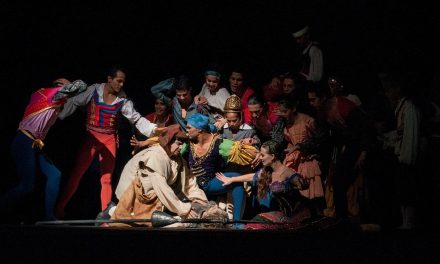