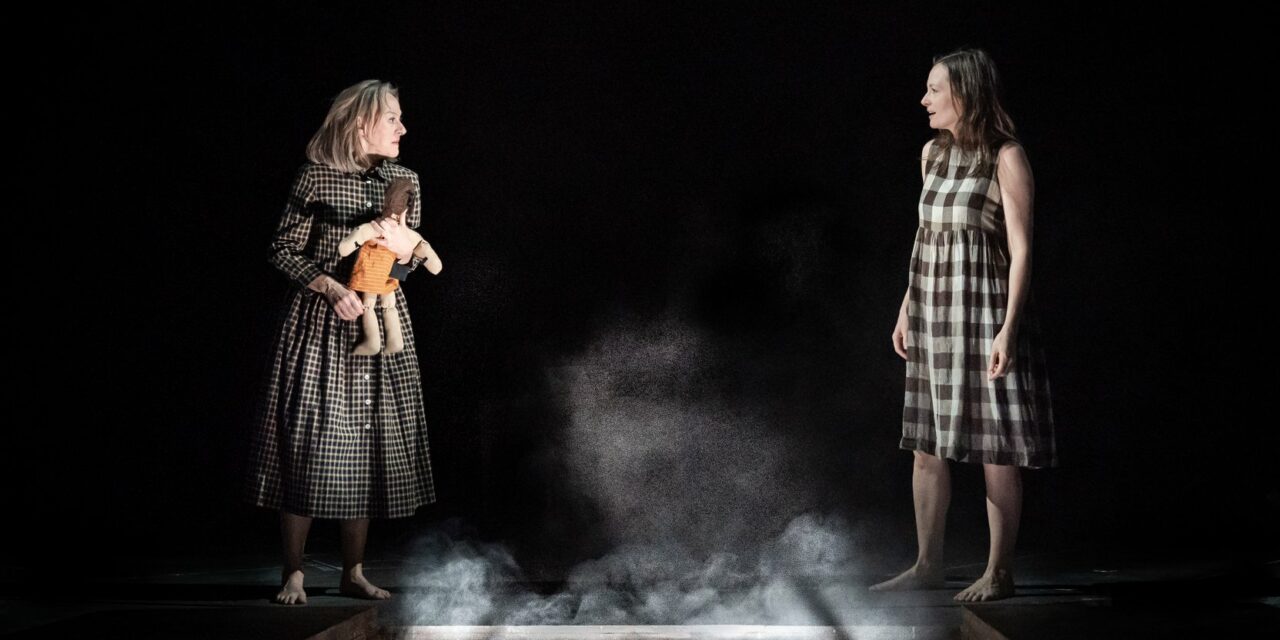 Niamh Cusack and Catherine McCormack in "My Brilliant Friend" at the National Theatre. Photo: Marc Brenner

Adapting novels for the stage is a tricky business. When the novel in question happens to be wildly popular and epically proportioned, the challenges faced by the adapter can escalate without mercy. Elena Ferrante’s globally acclaimed Neapolitan Novels, which have garnered a cult following since 2012, securely inhabit this latter camp. In this blisteringly captivating quartet of novels, Ferrante traces the intersecting lives of two women—the narrator Lenù and her childhood friend Lila—from the 1950s to 2010, as they are increasingly bound up with Italy’s turbulent social and political history. The unpredictably knotty relationship between Lenù and Lila stretches across a vast canvas that encompasses a wealth of narrative turns and thematic patterns, including an abiding interest in gender politics, language, self-fashioning, and—for lack of a better word—friendship. The novels constitute an extraordinary literary achievement, and the urge to adapt them for other media is therefore comprehensible.

But some urges are better checked before acted upon. A case in point is April De Angelis’ two-part dramatization of the novels—titled, after the first novel, My Brilliant Friend and now playing at the National Theatre’s Olivier stage after a 2017 run at the Rose Theatre, Kingston. While Melly Still’s overambitious production makes for a consistently engaging and affecting watch, it fails big time as an adaptation. Anyone who has read and enjoyed the novels would be appalled by the extent of cuts, omissions, and evasions inflicted on Ferrante’s story by Angelis’ pen. Hers is an adaptation that reduces the breathtakingly layered relationship between Lenù and Lila into a bland, awkward friendship—one that develops through a breathless succession of wobbly, frenzied events. Gone are the psychological intensity and aqueous flow of Ferrante’s novels. In their place stands a patchy attempt to nail down some of the essential plot points with utmost economy.

Deprived of the novels’ first-person narration, the play never manages to make up its mind as to whose perspective this decades-long story is focalized from. It is baffling that Angelis has chosen to jettison Lenù’s narrative voice, which is crucial to almost everything about their story, regardless of its medium. The play’s unnecessary departures from the novels, including its meddling with the frame narrative (in which Lila’s present-day disappearance triggers Lenù to write their story in retrospect), further hampers its effort to evoke what Ferrante achieves on the page. Neither meticulously loyal to the source text nor satisfyingly subversive in its take on it, My Brilliant Friend is stuck in an uncomfortable limbo. It’s an adaptation that feels like a poorly written plot summary and does not sufficiently enhance, by theatrical means, one’s experience of the original work. It merely scrapes the surface of what is so enchanting about these novels—not unlike a trailer that gives you, somewhat cheekily, a clear sense of how a movie will unfold and conclude. 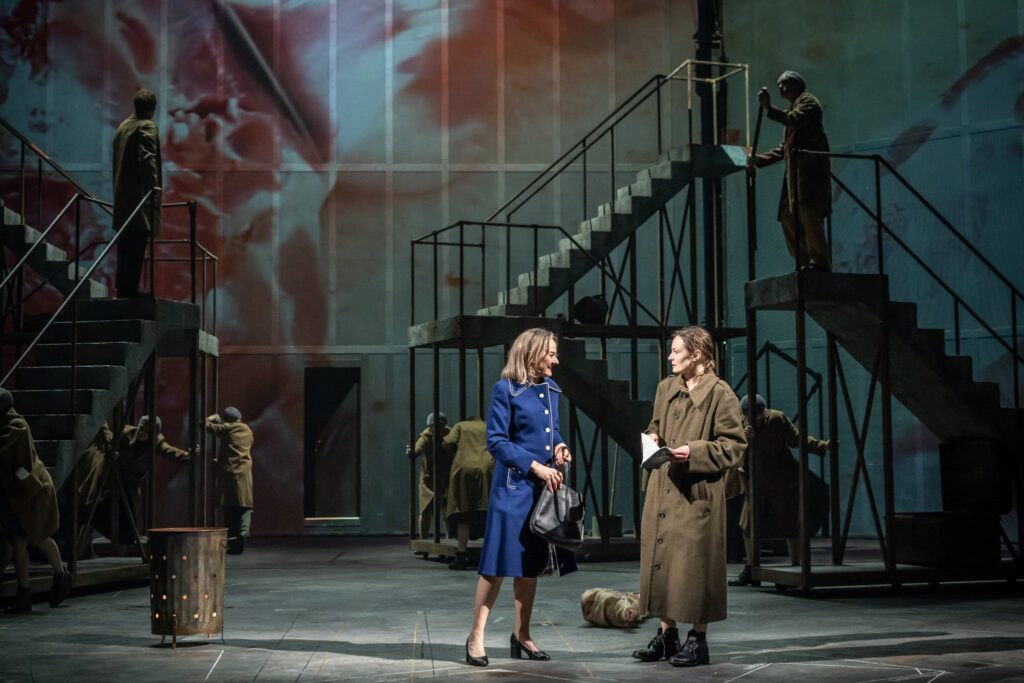 Niamh Cusack and Catherine McCormack in My Brilliant Friend at the National Theatre. Photo: Marc Brenner

So much for the ways in which these 5+ hours in the theatre can’t live up to the joys of being immersed in the novels. The other side of the coin is considerably less dispiriting. For all its dramaturgical failures, My Brilliant Friend is never dull or uninteresting. With the script in such disarray, one wouldn’t expect this production to exert such a hold on the audience, but it does. To begin with, for anyone not familiar with the novels, even this botched-up version of the story must appear exceptionally long and rich with details. The rapid pace of the action ensures that there are virtually no drawn-out or redundant moments. (If anything, many of the key scenes suffer from being cut prematurely.) That should count for something in a production of this size. Secondly, for the most part, Melly Still’s staging proves to be energetic, elastic, and eclectic. Her orchestration of this unwieldy work is strategic in the sense that it knows how to play its cards.

Still’s greatest asset is an exceedingly strong cast of 24, led by Niamh Cusack as Lenù and Catherine McCormack as Lila. From start to finish, the confident harmony of the entire ensemble is palpable. With understated flair, Cusack and McCormack embody their characters across decades, from childhood to old age. While they do a decent job of modulating their performances accordingly, both Lenù and Lila would have gained much in nuance if younger actors had played those characters’ younger selves. (Each of the two parts, for instance, could have had a distinct pair of Lenù and Lila.) There is astounding support from many members of the cast, notably Justin Avoth (Lila’s husband Pietro), Adam Burton (Michele Solara from the Camorra), Martin Hyder and Mary Jo Randle (Lenù’s parents), Badria Timimi (Lila’s mother, among other roles), and Toby Wharton (Lenù’s friend Pasquale and, later, Lila’s exploitative boss Bruno).

Integral to this cast’s impressive work is Sarah Dowling’s superb movement direction. What animates Soutra Gilmour’s vast but spare set design is an intricate, levelheaded choreography that frequently envelops the whole ensemble. Many of the scenes are punctuated by stylized movements that are at once expressive and efficient. Efficient, because the actors wheel around and reconfigure the staircases that comprise the heart of Gilmour’s scenography, which also relies on a revolve. As they ascend and descend the stairs frantically, run through the spaces beneath them, the actors turn these arid platforms into unassumingly useful tools of storytelling.

Another such tool is Tal Yarden’s video projections, which accompany almost every scene, clarifying the setting or the mood. Though most of these are discordantly overliteral, a few contribute greatly to some of the abstract moments. Malcolm Rippeth’s lighting is often well-balanced in its attempt to catch up with the play’s mad twists, and functions as a handrail for the audience to latch onto in keeping track of these changes. There are plenty of songs and sounds that strive to fulfill the same role, but barring a few piercing musical moments (composed by Jim Fortune and featuring Amiera Darwish’s voice), Jon Nicholls’ sound design feels fitful: most of the songs end abruptly, and some of the sound effects are disorienting in their own right. 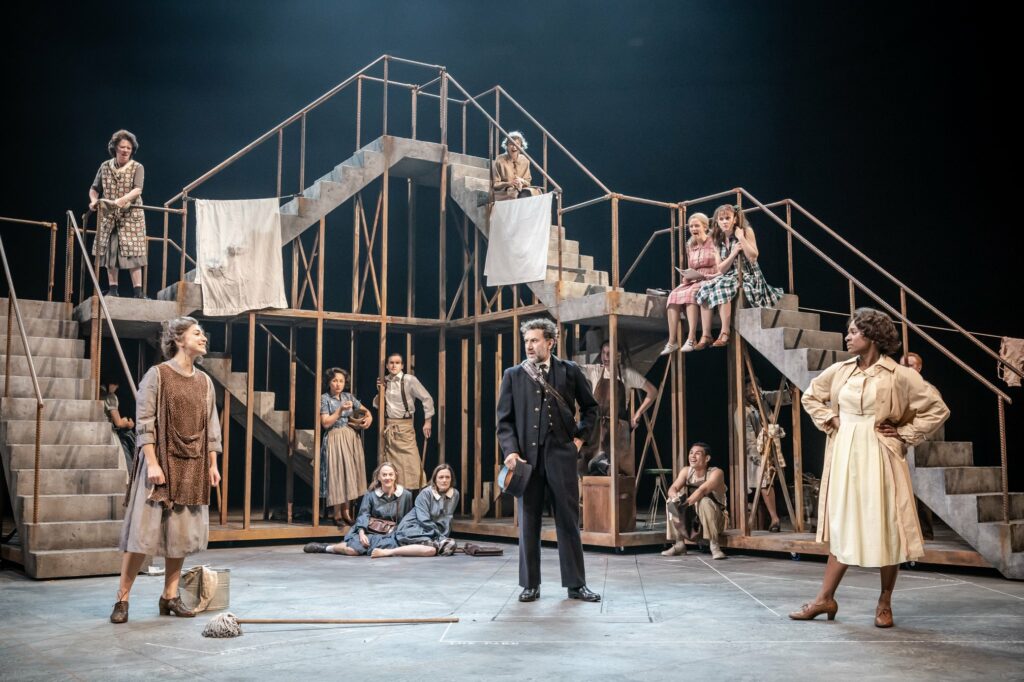 The cast of My Brilliant Friend at the National Theatre. Photo: Marc Brenner

It would be improper to forget the puppets. Designed and directed by Toby Olié, several objects come to life and add panache to certain scenes. Lenù’s and Lila’s daughters Imma and Tina are portrayed entirely through abstract puppets, which is one of the few examples of the play tapping into its own theatricality to do something interesting with Ferrante’s work. Another example can be found in scenes of Lila’s domestic abuse, where the choreography is centered on the male aggressor and a ghost-like dress discreetly controlled by an actor, which allows the violence to register less timidly. These are memorable flourishes, but the extent to which they fit into the work as a whole remains vague. Why, for instance, are Lenù’s and Lila’s older children, even when they are infants, (ludicrously) played by adult actors—whereas Imma and Tina are always puppets? The formal features of the production have such loose ends, but on the whole, they don’t stick out aggressively.

For the uninitiated, then, this stage adaptation of Ferrante’s novels would likely present a gratifying experience, replete with handsome performances, engaging stagecraft, and a remarkable story, however estranged from its source. But for those who have experienced the real thing, the real wonder, all this is a mere shadow—and I would advise them not to avert their gaze from Ferrante’s Neapolitan sun.