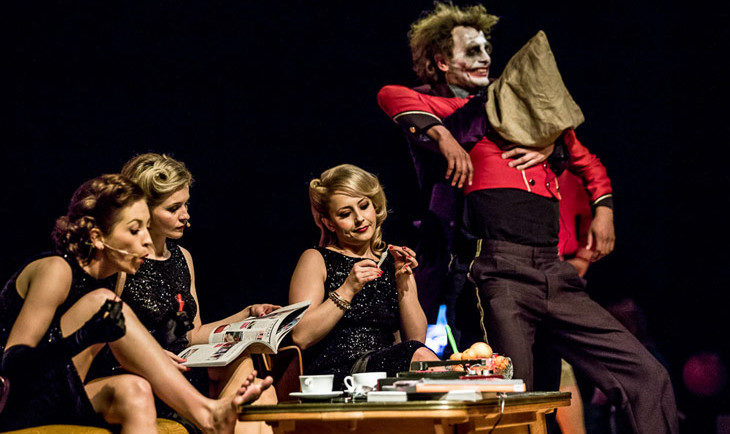 In Poland, the word “refugee” is now used by school children as an insult, as revealed by a psychologist Zuzanna Rejmer in her interview for a Polish newspaper Gazeta Wyborcza. Rejmer explains that children reflect the fear of foreign promoted by media and some parents and a general sentiment that one must be “superwhite” to be Polish and that if one is not Polish one may be a threat (Gazeta Wyborcza, 12.12.2016). “Superwhite” is also an appropriate adjective to describe Polish theatre that is racially extremely homogeneous. In addition, Polish theatre, in general, uses a standard, “neutral” Polish accent, which is partly linked with the fact that Polish language is strongly standardized and unified. As a result, Polish theatre rarely challenges the ideas on Polish racial homogeneity. On top of this, Polish society is currently experiencing the return of the nineteenth-century obsessions with the uniqueness and glorification of Polish suffering, as recently observed by Professor Maria Janion, one of the most eminent Polish literature and culture scholars.

The nineteenth century for Poland was the time of a long fight for independence from Russia, Prussia, and Austria, when the ideas on the homeland were deeply-rooted in Polish society. Culturally diverse Polishness of previous centuries was now linked with Catholicism; this was to highlight the difference between Polish and Orthodox Russians and Protestant Prussians, and in so doing to strengthen the sense of national identity. The play that perhaps best reflects the ideas of its time is Dziady [Forefathers’ Eve] by Adam Mickiewicz. The 1830s play is considered to be a sacred part of Polish heritage. Dziady glorifies the suffering of Poles throughout history and highlights the necessity of the individual sacrifice for the freedom of the whole nation, as well as the ability of the individual to rebel against God who abandoned Poland. Dziady has received numerous theatre productions and, whether one reads the play or not, it is engraved in one’s memory throughout the period of compulsory education, engraved forever.

I am setting this context to highlight the achievement of the director Radek Rychcik and his ensemble in their staging that reinterprets Dziady from the worship of national uniqueness and suffering to a celebration of community and diversity. In this production, non-native Polish speakers and the actors of colour finally get the opportunity to be represented on Polish stages and they also bring back elements of Polishness lost throughout history. The multi-awarded production premiered in 2014 at the Nowy Theatre in Poznań and is still in the theatre’s repertoire.

Mickiewicz’s Dziady, consists of four parts. Rychcik in his adaptation uses fragments of all parts, shuffling them around, but it is the second and the third parts that take center stage. The second one focuses on the ceremony of Dziady, which is a pagan festival held on the 31st of October during which the living would communicate with spirits. In the play that happens at the cemetery chapel, Guślarz [shaman] together with the chorus of peasants calls sinful spirits trying to help them to achieve salvation. While this part focuses less on the national cause, it reinforces ideas that suffering is necessary for salvation. The third part of Dziady is a theatrical celebration of suffering and martyrdom.

The point of departure for Rychcik’s production seems to be the historical and cultural timeline of Dziady, which is not a new idea as Dziady on stage are often interpreted alongside Polish history. However, Rychcik puts Dziady’s timeline into a global context. At first it seems that Rychcik’s focus is on pop culture as the initial point of tangency between the play and his staging is the 31st of October: the date of Dziady and Halloween. As a result the characters from the second part of Dziady look as if they were dressed up for a Halloween Ball. Guślarz (Tomasz Nosiński) who opens the performance and the ceremony of Dziady looks like the Joker. He is accompanied by the Maiden (Gabriela Frycz) “dressed up” as Marylin Monroe. Marylin sounds very similar to Polish Maryla and later on Frycz (still as Marylin) will also perform the role of Maryla, a symbol of romantic love and also the name of the object of Mickiewicz’s unhappy love, Maryla Wereszczakówna.

The costumes or the identities of Frycz and Nosiński are not the only ones that bring Halloween to mind. The stage looks like a “high-school-musical-type” basketball hall and it even has a Coca-cola fridge. This is a very appropriate setting for a Halloween ball and perhaps not completely inappropriate for Dziady, arguably staged by students in school halls more than by any professional theatre. Most importantly, however, this Americanised and colourful space seems much more entertaining than the conventionally dark space in which Dziady is often performed. The promise of entertainment links with the guessing game that at least some spectators are likely to engage in: what will the next character be dressed as?

The Chorus of Peasants (Oksana Hamerska, Anna Mierzwa, and Julia Rybakowska) looks more like the Andrews Sisters. Józio (Grzegorz Gołaszewski) and Rózia (Marta Szumieł) – the spirits of brother and sister who were so loved by their parents that in their short lives never “tasted” any bitterness and, therefore, now cannot “taste” any heavenly happiness – appear as the girl twins from The Shining. Mrs. Rollinson (Maria Rybarczyk) –Polish symbol of sacrifice and motherly love – is dressed as Mammy from Gone with the Wind. Rybarczyk’s face is painted black, but the hands and the legs reveal the “dressing up”. They all deliver the iconic Mickiewicz lines, but they look like icons of pop culture. If we consider the actor’s body and the speech separately, it almost seems that they perform two different identities, which, in some cases, seem to negate each other. This, by extension, mobilizes the production’s playful challenge of Dziady. The cross-dressing of Gołaszewski highlights that in the play it is only Józio, the boy, who speaks, while the connection with The Shining ridicules the idea of the suffering being necessary to salvation. Rybarczyk’s Rollinson aka Mammy brings the symbols of the Polish mother and of the Old South together and questions romanticizing of oppression; it also highlights the absence of non-white actors in Polish theatre. At the same time, the pop cultural references make these questions playful and engaging.

However, as the performance proceeds, one realizes that the colourful characters are not only masked, but they themselves mask the tragedies that happen on stage and pass by almost unnoticed. Guślarz-Joker and Maiden-Marylin, while flirting to Mickiewicz’s line, use toy cars to re-enact the assassination of JFK; later on while Guślarz-Joker raises the spirits and the audience, arguably, is involved in the guess-game, the all-white basketball team hangs the black hotel boy on the basketball hoop. Slowly, the point of tangency between Rychcik’s and Mickiewicz’s Dziady moves away from the 31st of October towards the global timeline of suffering. The climax of that and, at the same time the emotional climax of the production, comes at the moment of the so-called ‘Great Improvisation.’ During this monologue, Konrad-Gustaw, the lonely protagonist, dwells on the sense of existence, Polish loss of independence and suffering, and finally identifies himself completely with the suffering of Poland and challenges God to give him “the rule of souls” so he can save his nation and humanity. The performance of Konrad and this monologue in particular, can define the actor’s career and the delivery of the Great Improvisation is always a talking point of productions based on Dziady.

In Rychcik’s staging, one does not see the lonely Konrad-Gustaw. Instead, there is a group of naked people of the stage, shaking as if freezing. They represent male students accused of conspiring against the tsar and being transported to Siberia. However, the bodies on the stage are both male and female, black and white, which highlights and challenges the play’s ideas on suffering as uniquely white, male, and Polish experience. In that moment Mariusz Zaniewski, who plays Konrad in Rychcik’s production, delivers Rychcik’s “translation” of the Great Improvisation: the 1963 Martin Luther King speech.

The choice of the Martin Luther King speech is very appropriate through the context of freedom and the long fight for it, and of the individual sacrifice for the nation. At the same time, the difference is highlighted by English language delivery, the presence of surtitles, and the opening line that is a quote from the character of Bill McNeal from the TV series News Radio known for his misquotations. Zaniewski is Polish and his English does not sound like Martin Luther King’s English, but it does not sound like Polish-English either. In fact, there is a small twinge of an Australian accent in his delivery as Zaniewski spent some time in Australia as a teenager. Is what we hear Polish or foreign? And does it matter? Because during this monologue, the foreign and national elements become blended to the point when the dichotomy loses its relevance and gives a space to a story of suffering and enslavement overcome by community. This is especially given that Zaniewski, while delivering the monologue, is neither at the front nor in the centre of the group. Instead, he is part of the group.

This importance of community is given a point, when Zaniewski’s monologue is followed by a song of prisoners. In the play the song is performed by Konrad and the chorus of prisoners; they sing about vengeance on the [foreign] enemies. In Rychcik’s production, it is another actor (Michał Kocurek) who initiates the song and beats the rhythm using a basket ball. The lead male voice is joined by other voices, first male than female, that sing in Polish with both Polish and foreign accents. It is in this diversity that the song becomes powerful and aesthetically relevant. At the end, it stops being about vengeance and it becomes about the rhythm, the beauty of accents, and a celebration of community and diversity. The importance of the diverse accents in creating that should not be underestimated. The main reasons for the Polish language being standardized are rooted in the post-Second World War resettling and the communist regime; in other words, they are rooted in Polish history and linked with the impact of  “demonic” foreign powers. In Rychcik’s staging, it is the foreign voices that bring back the quality of language that was long lost.

The production’s engagement with diversity is further facilitated by the unorthodox places that Rychcik’s Dziady are sometimes performed, including open-air music festivals. It is also helped by the publicity gained by the production and enhanced by diverse and extreme reactions to Rychcik’s Dziady. The production received multiple awards, including a Grand Prix of Opolskie Konfrontacje Teatralne “Klasyka Polska 2014” [Theatrical Confrontation “Polish Classics” in Opole], an annual festival that brings together the most accomplished productions of classics in Poland. However, it was also the main subject of an open letter to the Polish Minister of Culture and National Heritage. The letter protested against the production as a product of a sick imagination that distorts the play and ridicules Poland’s past. But perhaps, diverse responses are something that Rychcik has hoped for… 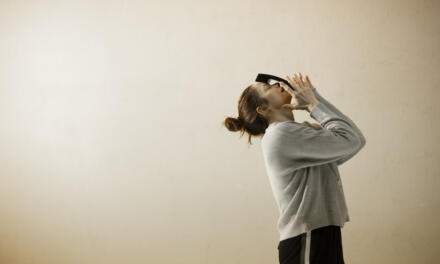 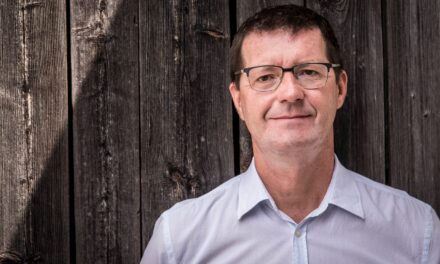